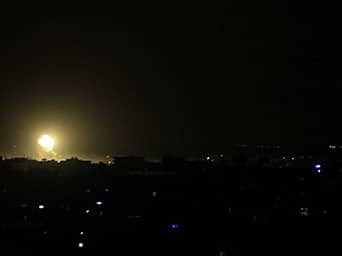 Darkness of Western media over Gaza

Fire rises from a building following an Israeli strike in the town of Rafah, the southern Gaza Strip, November 16, 2012.

“Amanpour’s behavior, her attitudes, her indifference to morality, to legality and humanity aren’t one bit atypical of Western Media, the “pop culture journalists” who read from “talking points” prepared by lobbyists and intelligence agencies, who are, in many cases, carefully tasked members of intelligence organizations themselves.”

The fighting, for now at least, in Gaza is over.  Both sides are “spinning a victory,” for the press.  What escapes the media is truth and reality.  If this were only incompetence and not complicity.

Some say the conflict started when Israel used military force in assassinating a top Hamas leader inside Gaza.

A more realistic view would also include this minor sub note, that Gaza has been bombed nearly continually.  I was “live” (Skype) with Ken O’Keefe, not so long ago; when Israel bombed, what they claimed was a “rocket factory” in a residential neighborhood.

O’Keefe, a VT correspondent and US Marine, walked into the burning rubble, his camera operator filming it all.  Before the ceiling collapse, with me yelling at him to “get out of there, Ken,” he picked through what had actually been destroyed.

It was a pharmaceutical and medical supply warehouse.  The debris made it clear, pill bottles, medicines, bandages, items Israel has typically considered the tools of terrorism.

These bombings had been nightly.  Maybe they will stop for a while, if so, rockets will have bought the respite, not Israeli “good will.”

I would spend hours on Skype with Ken during his 18 months there; the Israeli air strikes were continual.

We have looked at Ken O’Keefe, a journalist.  We will look at one more, Christina Amanpour with her multimillion-dollar salary and the world at her feet?

Is she also a journalist?  We are going to decide on that.

Over the period that most in the West believe there has been “peace,” the Israeli Air Force has flown thousands of sorties over Gaza and their record of hitting targets they feel “justified” to go after is even worse than the American drone record.

A good set of estimates, depending on definitions can go between 85% and 98% “collateral damage,” based on definition.  85% of casualties have been women and children and the remainder could be classified as “militants,” a combination of police, legally constituted militia, members of local and foreign press (needing silencing) and members of government that Israel opposes.

A reminder for those unfamiliar with the democratic realities of Gaza and the West Bank, during the elections of January 25, 2006, Hamas won 74 of 132 seats on the Palestinian Legislative Council.

This made Hamas the chosen and democratically elected government of what United Nations Security Council Resolution 242 of November 22, 1967 designated an independent state.

There is a second more serious problem, the one sided point of view as to what it means to invade and occupy, the definition of “apartheid” and, more specifically, when stealing land from rightful owners because they are of the wrong religion is allowed. This is technically a war crime by every imaginable definition.

America just finished a hotly disputed election where the government of Israel, the ruling party who has maintained power through propaganda, intimidation, and vote rigging, has attempted to, quite literally, impose its will to install a president few Americans wanted.

We in Ohio only have to look back to the 2004 election when our voting machines were altered at 11:17 PM on election night and key highly democratic areas were “flipped” using a software hack written by now deceased Bush “hacker” Mike Connell.

During our most recent election the same attempt was made, voting machines crashed, and votes were sent to an out of state processing facility to be altered, but this time the hack was overridden.

Now we are told dozens of top officers have been removed or are awaiting removal because they have been involved in a plot to override the American election the same way Israel deals with other politicians that it disagrees with.

This is part of a story easily followed, one Americans and Europeans will never hear.  Two days ago, Christina Amanpour, CNN’s top correspondent, believed by most Americans to be a “friendly and ‘safe’ Muslim,” interviewed Hamas Political Chief Khaled Meshaal.

Notwithstanding that Israel had just killed well over 100 Palestinian civilians during a short conflict they began with a “targeted assassination” of a Hamas leader using an American supplied jet bomber; this is how Amanpour saw what she represents as “fair and balanced” journalism:

“Amanpour: There has been a terrible attack inside Israel today, in Tel Aviv. The first of these kinds of attacks in six years. A bomb on a bus, and there have been many casualties. Does Hamas claim responsibility? Did Hamas do that?

Meshaal: This question must be addressed to (Israeli Prime Minister Benjamin) Netanyahu.

Amanpour: No, no, I’m asking you. Did Hamas claim responsibility? Did Hamas do that?”

At no point does Amanpour address Israel’s role in starting the war or its systematic targeting of civilians.  In one attack alone, 15 women and children in a single home died.

Meshaal: Not Hamas, not others, not other people from, not Hamas. No one can announce except those who committed, not me. The lesson is what matters. What led to this? Who created the circumstances that led to this operation? It is Netanyahu with his crimes, in killing the kids of Gaza, and the continuity of aggression. He create(d) such ramifications everywhere. This could lead to any kind of reaction as retaliation for what happened in Gaza.

These are the highlights CNN chose to publish from the interview.  Note the consistency of Amanpour, never acknowledging the one reality, that this and every conflict for over 60 years has never been about Israel’s “right to exist” but, rather Israel’s right to exist as an apartheid state with six million refugees locked in camps, a situation we have seen so many times before, Stalin’s gulags, America’s “Indian reservations” or South Africa’s “townships.”

Might we also add the Warsaw Ghetto or Dachau?  Did anyone ever accuse the Germans of dropping bombs on Nazi concentration camps the way Israel does with theirs?

“And yet you say that you would accept a two-state solution but you won’t recognize Israel’s right to exist,” Amanpour said.

Meshaal repeatedly said that the “Palestinians are offering peace” and blamed the United States and Israel for working toward situations that are not peaceful.

“How can I accept Israel? They have occupied my land,” Meshaal said.

Amanpour asked him directly if Hamas is getting weapons from Iran.

Hamas is a “resistance” against “occupation,” he said and it seeks financial, military and other forms of support from Iran from any state that wishes to support Hamas.

The group gets helps from Europe and from Iran, wherever it can get it, he said.

“So the answer is yes,” to whether Iran helps Hamas, Amanpour challenged.

“I answered you,” Meshaal replied.

“The end game is to end occupation,” he said, and “peace throughout the region.”

I watch the video and I see Amanpour, and I see Meshaal.

Where is someone to ask questions of Amanpour?  Let me think of a few:

“The policy and practice of nuclear opacity was codified in 1969 in an extraordinary secret accord between Israeli Prime Minister Golda Meir and US Pres Richard Nixon. In Israel, for government officials, security analysts, and even the general public, nuclear opacity is one of the Jewish state’s greatest strategic and diplomatic success stories.”

Amanpour’s behavior, her attitudes, her indifference to morality, to legality and humanity aren’t one bit atypical of Western Media, the “pop culture journalists” who read from “talking points” prepared by lobbyists and intelligence agencies, who are, in many cases, carefully tasked members of intelligence organizations themselves.

Journalists are often followed, threatened and killed.  More are simply bought, certainly all those working for major media fall into this category.

As for this year’s Gaza War, “journalists” such as Amanpour may well decide the aftermath.

However, are they really journalists at all?