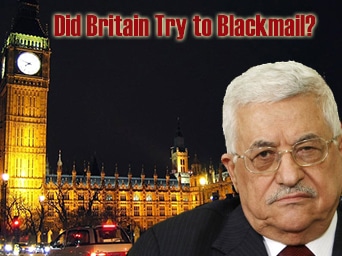 “Promise not to prosecute Israeli war criminals, not to go for full UN membership, not to seek justice but submit to rigged talks, and we’ll support you”

Britain’s Foreign Office, on its website, states loudly and clearly: “The UK is committed to upholding international justice and all of our international obligations. Our core principle is clear. Those guilty of war crimes must be brought to justice whether they are Israeli or any other nationality. We are also committed to ensuring that UK systems are robust in meeting its international law obligations.”

Yet ugly rumours are flying that the British government twisted the arm of President Abbas and told him the UK would only support Palestine’s modest upgrade to ‘observer state’ at the UN (to be decided tomorrow, Thursday) if he pledged not to pursue Israeli war criminals through the International Criminal Court.

In a statement issued yesterday by the Palestinian MIssion in London, Ambassador Hassassian says: “It was reported recently in several media outlets that in exchange for its – the British government’s – support of the Palestinian UN bid it wants guarantees from Abbas including: (1) That the Palestinians will not bring cases against Israeli officials to the ICC or other UN agencies…(2) That the Palestinians will not use UN observer status as a basis for a renewed appeal to the UN Security Council for full membership to the UN…(3) That Abbas will commit to renewing peace talks with Israel without preconditions.

“Such steps would undermine the Palestinian leadership and its credibility with its own constituents. The British government is once again putting conditions for its support to the Palestinian people instead of shouldering its historic responsibility towards them… I urge the British government to fulfil its responsibility and stand at the right side of history by recognizing the state of Palestine and voting in favour of an enhanced Palestinian status at the UN.”

This morning the Palestinian embassy in London was unable to verify that any such pressure was put on Abbas. But that is not to say it didn’t happen and numerous media sources got it wrong. The conversation was likely to have taken place in Ramallah, and Ramallah is not noted for its responsiveness to media questions.

A last-minute message from the PLO communications office reads: “I can confirm that there has been British pressure to deprive of our right to ratify an international treaty. I can also ratify that we have been very clear in telling the UK that we are not going to compromise on our sovereignty. The resolution haven’t been and will not be modified to adequate any objection to our right to self determination and protection of our people.” What exactly that means I don’t know. And they still won’t say who put the squeeze on Abbas.

If nothing else, this episode demonstrates once again the deplorable state of the PLO/PA’s media skills.

If indeed any attempt were made by the UK government to deprive the Palestinians of the status, privileges and freedoms enjoyed by their neighbours it would be a deep disgrace on the people of Britain.

Solemn and binding obligations to pursue war criminals… do they mean nothing?

All states that are party to the Geneva Conventions – and that includes the UK – are under a solemn and binding obligation to seek out those suspected of having committed grave breaches of the Conventions and bring them to justice. There should be no hiding place for those suspected of crimes against humanity and war crimes.

The UN’s Goldstone report and the international law panel appointed after the Gaza flotilla incident raised the issue of Israel’s impunity and unaccountability.

But what we’re up against in the UK is a biased and unprincipled administration that wants to let ‘friendly’ war criminals off and protect them from arrest while they visit Britain. The government recently watered down UK law on universal jurisdiction arguing that foreign politicians they happen to like, no matter how thuggish, should never be made to feel unwelcome. The overriding principle that no-one, regardless of nationality, should feel able to commit war crimes with impunity, is sacrificed so that the likes of former foreign minister Tzipi Livni, with the blood of thousands of Palestinian dead and wounded on her hands, can go shopping in London.

Livni, the pin-up girl of the Knesset, is reported to be making a comeback in Israeli politics at the head of a new party in January’s elections. Seems our Foreign Office chaps are hopelessly smitten by her.

Meanwhile mountains of evidence of Israel’s war crimes are just waiting to be tested in the International Criminal Court.

The purpose of the ICC http://untreaty.un.org/cod/icc/statute/romefra.htm is “to help end impunity for the perpetrators of the most serious crimes of concern to the international community”. The Court has jurisdiction over genocide, crimes against humanity and war crimes committed by nationals of a State Party or on the territory of a State Party since July 2002.

115 states have signed up. The UK is one of them, and so too is Afghanistan. But rogue states like the US, Israel and Saudi skulk in the outer darkness.

A further 34 countries, including Russia, have signed but not ratified. Three — Israel, Sudan and the United States — signed and then, presumably realising their conduct was not up to the standards expected and no doubt wishing to undermine its work whenever it suited them, ‘unsigned’.

Palestine declared its voluntary acceptance of the ICC’s jurisdiction in 2009, but whether it should be regarded as a ‘State’ as required by Article 12(3) of Rome Statute has been the subject of much debate. In April this year the ICC General Prosecutor Luis Moreno-Ocampo said the court would not accept a Palestinian demand to investigate alleged war crimes by Israel until Palestine was recognize as a state by the UN General Assembly. “In order to proceed we need the General Assembly of the UN accepting Palestine as an observer state. As soon as this is done we can proceed.”

If the ICC does acquire jurisdiction, it will inherit a whole shed-full of damning evidence gathered not only by Goldstone but many other organisations such as Human Rights Watch, Amnesty International and the Arab League Fact Finding Committee.

Consequently Israel and its obedient friends America and Britain are getting edgy.

In the meantime the PLO Executive’s Hanan Ashrawi has announced that Palestine’s final resolution was submitted to the UN on Monday, so all this last-minute bickering and arm-twisting is academic. It has been too late to change the wording since last weekend.

Within Palestinian ranks there seems to be a measure of unity. Hamas’s chief-in-exile Khaled Meshaal and fellow political bureau member Izzat al-Rishq said on Monday that they supported Abbas in going before the United Nations, but warned that Palestinian “constants and rights” must not be compromised nor any inch of Palestinian land sacrificed.

Whether Hamas’s leaders-on-the-ground are quite so enthusiastic isn’t clear. However, prime minister Ismail Haniyeh said “nobody is against statehood, and (my government) supports any political move to establish a Palestinian state on the occupied Palestinian territory.”