—
Iran’s Islamic Revolution Guards Corps (IRGC) has captured a US ScanEagle drone over the Persian Gulf waters upon its intrusion into the Iranian airspace.

Referring to the captured ScanEagle drone, the Iranian commander pointed out, “Such drones are usually launched from large aircraft carriers.”

The ScanEagle drone, which has a 10ft (3m) wingspan, is a long-endurance aircraft built by Insitu, a subsidiary of Boeing.

Iran has released footage of the captured drone.

A report on the website of the Wall Street Journalon Sunday cited US officials as saying that Washington has stepped up its spying operations on Bushehr nuclear plant in southern Iran “over the past two months”.

The report said that the increased spying missions by the US on the Iranian nuclear facility “has been conducted in part with the Pentagon’s fleet of drones operating over the Persian Gulf.”

Commander Fadavi further said that the IRGC Navy is fully monitoring all the movements of the foreign forces in the Persian Gulf and the strategic Strait of Hormuz to counter any potential threats against the country.

Earlier in December 2011, the Iranian military also grounded a US RQ-170 Sentinel stealth aircraft while it was flying over the Iranian city of Kashmar, some 140 miles (225km) from the Afghan border. 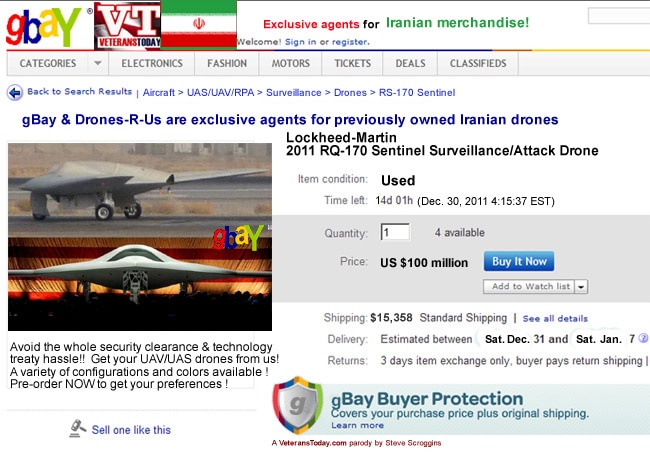 The US RQ-170 Sentinel stealth aircraft was downed with minimal damage by the Iranian Army’s electronic warfare unit. The drone was one of America’s most advanced spy aircraft.

Last month, Iran repelled a US drone that had entered the country’s airspace above the territorial waters of the Islamic Republic in the Persian Gulf.

Brigadier General Amirali Hajizadeh, the commander of the Aerospace Division of the Islamic Revolution Guards Corps (IRGC), said that the drone had been driven away by Iranian forces as it attempted to gather intelligence around Kharg Island in southern Iran.

Hajizadeh also warned that the country’s armed forces would respond with stronger action if US drones attempted to violate Iran’s airspace again.