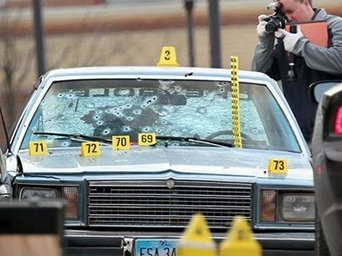 (Editor’s Note: This time the “suspects” weren’t wheelchair bound veterans with mobile phones…as is often the case…should we be thankful that the “blue mob” is now slaughtering others?)

Tensions are on the rise in the major US city of Cleveland after 13 predominantly white police officers fired 137 shots to kill two unarmed African Americans following a 25-minute car chase.

Family members of the two victims, 30-year-old Malissa Williams and 43-year-old Timothy Russell are outraged over the incident, which took place Thursday night near the Justice Center in downtown Cleveland when several people claimed they heard a gunshot, leading to a high speed police chase after the couple’s vehicle and their killing, local media outlets reported.

The reports have not yet indicated how the victims became suspects, prompting the long car chase and what prompted so many police officers to shoot the victims so many times, terrifying neighbors near a middle school, according to some news accounts.

Although a chasing police officer has claimed that the suspects pointed a gun at them during the chase, no weapons have been found in their vehicle and no bullet shell casings have been located outside the downtown building or along the route of the police chase.

Moreover, 12 of the 13 police officers involved in the brutal shooting have been identified as white, including five veteran detectives. The other police officer involved is reportedly Hispanic.

This has led many people to believe that the police shooting was racially motivated and part of a national trend in which a growing number of African Americans and other racial and ethnic minorities have been targeted by mostly white American police forces.

Meanwhile dozens of local residents staged a protest rally in Cleveland on Monday, outside the middle school where the police shooting occurred, demanding answers for the brutal killing.

Some people in the group referred to the killings as a “lynching” and one protest sign compared the killing of the two African Americans to infamous American criminals “Bonnie and Clyde.”

Cleveland Mayor Frank Jackson, meanwhile, expressed his own concerns about all aspects of the incidents, from the length of the pursuit to the number of officers involved.