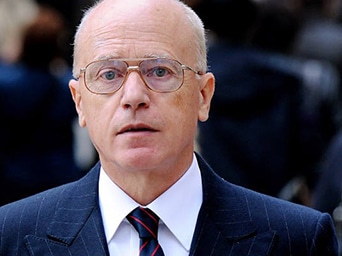 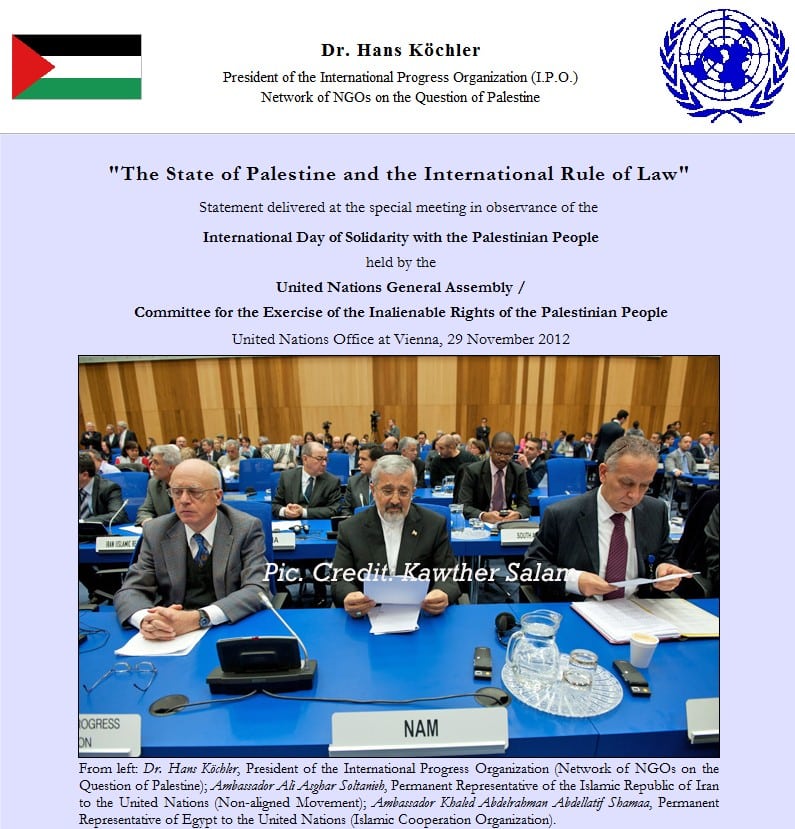 Mister Chairman,Excellencies,Ladies and Gentlemen,Exactly a year ago, on 29 November 2011, I expressed, before this august gathering, my concern that “talk of peace has become virtually meaningless” in the face of continuing aggression and occupation of Palestinian and Arab land, and of an ever more hostile and determined strategy of the occupying power to continuously expand control over and possession of Palestinian territory, including exploitation of its resources.This policy has not been reversed, or even softened, in any way since our last meeting; over decades, subsequent Israeli governments have followed a strategy, and worked out corresponding legislation, to create ever “new facts on the ground.” This has now resulted in a situation where the very viabilityof the State of Palestine is at stake, which requires a contiguous territory and sovereign control over its resources (including the most essential of all under the conditions of the Middle East: water).The recent confrontation between Israelis and Palestinians, in fact a war against the population of Gaza, has highlighted once more, and in a most tragic fashion, the predicament of the citizens of Palestine, living under the de factooccupation of a powerful neighbor: any move on their part to exercise their legitimate rights, and to resist aggression or pervasive control over their daily life, is immediately dismissed as an illegitimate act against the occupying state.

In this context, namely under such conditions of effective military domination, the people of Palestine have an understandable interest to get their inalienable rights acknowledged by the international community. When the occupying power tries to undermine their bid for statehood and continuously expands its colonial settlements in the Palestinian territories, it is only fair – and perfectly reasonable – that the Palestinian Authority aspires to the status of non-member observer state at the United Nations.This is an exercise of the inalienable right to self-determination, and not an illegitimate “unilateral act.” Let us be clear about of that term: The expulsion of the Palestinians from their native land in 1948 was a unilateral act; the extension of the borders of the State of Israel by military force was a unilateral act; the annexation of East Jerusalem and of the Syrian Golan heights were unilateral acts; the expropriation of Palestinian land, the building and continuous expansion of Jewish settlements were, and are, unilateral acts by the occupying power – not to speak of the innumerable violations of international humanitarian law, and in particular the provisions of the Fourth Geneva Convention, in the course of these acts.

In contrast, a people’s claiming its inalienable right to self-determination and, consequently, statehood, and expecting the international community to recognize this step, is not a unilateral act in the meaning of the law.

Especially in light of General Assembly resolution 181(II) of 29 November 1947, it is entirely appropriate that the world organization – under whose auspices we are assembled today – accords recognition, and in a legally specific way, to the Palestinian people’s sovereign decision to establish their own state in the land of their fathers.

Since last year’s application for full UN membership, however, it has again become painfully obvious that the Security Council, because of the veto rule, is unable to act on this matter. This has highlighted the role of the General Assembly that, according to the Charter, is in a position to acknowledge the existence of Palestine as a state without the intercession of the Security Council, albeit in the category of observer. In view of the universal membership in the Assembly, the democratic legitimacy of such a decision, if eventually taken, is beyond any doubt. Let us not forget that more than 130 member states of the UN have already individually recognized the State of Palestine.

Observer state status will, inter alia, enable the Palestinians to claim their international legal rights without third parties as intermediaries – and it will potentially be an important step to end impunity for violations of international humanitarian law by the occupying power in Palestine.

All those who are committed to international democracy and the rule of law will certainly reject the pressure exerted by some states upon the Palestinian Authority to agree to an amendment of the draft resolution before the Assembly that would imply that the State of Palestine does not accede to the Rome Statute of the International Criminal Court (ICC). The end of impunity for the commission of international crimes in Palestine could indeed be an important and substantial contribution to a peaceful settlement of the underlying conflict – a reasoning that the Security Council has already applied, and upheld, in other conflict situations where it created ad hoc tribunals or referred situations to the ICC, as measures to restore or maintain international peace and security.

We also have to reject all forms of economic pressure and political threats vis-à-vis the Palestinian Authority in connection with the draft resolution on observer state status – such as the withholding of tax revenues that rightfully belong to the Palestinian administration. To link the exercise of an inalienable right to punitive measures effectively amounts to political blackmail; such acts are totally illegitimate and diametrically opposed to fundamental principles of the rule of law. In its current session, on 24 September 2012, the General Assembly has solemnly confirmed those very rules, and I quote: “We recognize that the rule of law applies to all States equally, (…) and that respect for and promotion of the rule of law and justice should guide all of their activities and accord predictability and legitimacy to their actions.”

The reality on the ground in Palestine could not be further away from this lofty ideal.

The International Progress Organization sincerely hopes that the international community, represented in the General Assembly of the United Nations, will follow up on the eventual recognition of Palestine as observer state and take additional legal or political measures so that the occupying power’s strategy of colonial expansion in the West bank, which threatens the very viability of the Palestinian state, and of collective punishment – in particular of the population of Gaza – will come to an end. As regards the policy vis-à-vis Gaza, British Prime Minister David Cameron has already declared in 2010 that the Israeli blockade has turned the Gaza strip into a prison camp: “Let me (…) be clear that the situation in Gaza must change. Humanitarian goods and people must flow in both directions, Gaza cannot and must not be allowed to remain a prison camp.” It is high time that, after the recent armed confrontation, which was again characterized by a totally disproportionate use of force, the provisions of the “Understanding Regarding [a] Ceasefire in [the] Gaza Strip,” sponsored by Egypt, are implemented in their entirety, and that the siege be lifted without any further delay.

The turmoil and uprisings in the region must not be misread. The old colonial – or imperial – tactics of divide et impera [divide and rule], practiced since the end of the First World War, will not be effective on the core issue of the Middle East conflict in the long term. The peoples in the Arab world and the wider Middle East, though undergoing a process of profound change in terms of their political aspirations and identity, will not be misled about the causes of the suffering of their brethren in Palestine – or eventually simply forget about it because of their preoccupation with domestic affairs. Trying to buy time, and delaying a just and permanent solution of the Palestinian issue indefinitely, is a dangerous gamble under the circumstances of geopolitical transformation in the entire region.

Let us hope that events at UN headquarters in New York, which, later today, will document the support of a large majority of the international community for a sovereign Palestinian state, will also convince the occupying power and her allies to reverse course and seek a permanent settlement of the dispute on the basis of justice and mutual respect. Only a policy inspired by these principles will ensure security and sustainable peace in the interest of all peoples in the region.