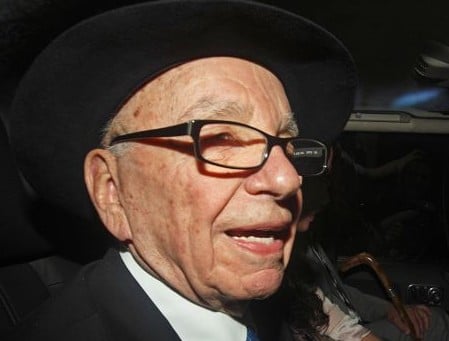 —
“News agencies, Fox and the Newscorp/Murdoch group, CNN, the New York Times, even Washington “think tanks” and the endless bellicose outpourings from Washington, London, Berlin and, most of all, Tel Aviv, can all be traced to systematic manipulation of key markets, crude oil and fuels, rare earths and defense related minerals and even currency markets.”

Last week, the London Times, owned by Rupert Murdoch, a “stealth” Israeli citizen and powerful Likudist leader, ran a purposefully false news story. His “tale” involved the use by Israel of bases within Azerbaijan by drones to plan attacks on Iran.

Azerbaijan’s president quickly denied the report, pledged his solidarity with Iran and demanded a retraction. The Times had no source for the report. It was invented.

Sources tell us the story was run as part of a fraudulent manipulation of oil markets. Billions were made in hours.

When the “denial” was published, billions more were made through illegal “short selling.”

When government, the military, the financial market, media and world terrorism become part of the same “corporate society,” there is big money to be made.

Turn on your television, watch the news. The story is in front of you every day.

News agencies, Fox and the Newscorp/Murdoch group, CNN, the New York Times, even Washington “think tanks” and the endless bellicose outpourings from Washington, London, Berlin and, most of all, Tel Aviv, can all be traced to systematic manipulation of key markets, crude oil and fuels, rare earths and defense related minerals and even currency markets.

One day, an Israeli official will announce, as we saw with Defense Minister Ehud Barak back in August while interviewed by Mossad “news asset” Wolf Blitzer, that “Iran has no nuclear weapons program.”

Barak’s statement could have been based on intelligence reports that, consistently since 2007 and before, have indicated that Iran has no nuclear weapons program.

It could have been based on reports from those who run Israel’s own illicit nuke program, one the UN General Assembly recently voted to curtail, clear knowledge that a nation that actively builds illegal weapons of mass destruction knows when another nation is not.

No nation has more knowledge of deceit or spitting in the face of the international community as Israel does.

Then, of course, a concerted effort soon followed, as though Barak had never existed, threats to bomb Iran, even orders to expand Pentagon exercises to create greater war threats in the region.

Bastin, with over 40 years’ experience, “hands on,” with nukes, a Marine veteran of World War II, said of his close friend and former co-worker at the IAEA, Albright:

“David Albright, a physicist, former colleague, president of the non-government Institute for Science and International Security in Washington and a former consultant for IAEA inspectors, is recognized by the US news media as an expert on nuclear weapons but is not. I called David several months ago to correct inaccurate information attributed to him by New York Times reporter William J. Broad. I also mentioned that Pakistan probably did not have many nuclear weapons because gun-type weapons require about 100 pounds of highly enriched uranium. David said that he had seen drawings of Pakistan’s weapons and they had solid cores but were implosion, not gun-type. With that statement, I realized that David did not understand basic concepts of nuclear weapons.”

When stories hit the news that there had been large-scale manipulation of airline stocks that would have required advanced knowledge of 9/11, the media quickly called the story “conspiracy theory.”

The problem is that the stock manipulation scams tied to 9/11 were very real, carefully documented and involved billions of dollars.

Notwithstanding, the acquisition of the World Trade Center itself by Larry Silverstein, buildings reeking of dangerous asbestos, nearly empty, a massive financial liability that would have required billions in renovation or demolition suddenly became the “deal of the century” when 9/11 happened, within days of the entire facility being vastly over-insured against terror attacks.

The problem is that this has gone on for years. The problem is that the manipulation of intelligence leading to the invasion of Afghanistan and Iraq can be tied to tens of thousands of transactions, all tied globally to government agencies, the majority of news organizations and, just “seemingly,” terrorist groups that may very well have always been, in actuality, arms of the CIA, Mossad, MI-6 and other such organization.

A careful analysis of investment patterns, oil, arms, shipping, minerals, pharmaceutical, defense and others, beginning with 2001, indicate a pattern of advanced knowledge and even manipulation of historical events.

A more serious problem is that the super-computers operated by the NSA and other agencies are tasked with seeking and recognizing such patterns.

In fact, we have solid information that the organizations tasked with monitoring ties between terrorism and market manipulation may actually have been used to plan the acts themselves.

This, of course, would represent an accusation that groups within the US government had invented the “Global War on Terror” in order to loot the world’s financial market, crash currencies, create a permanent ability to destabilize any sector at will and do so without any threat of retribution.

We have always seen wars chase resources, wars for oil, wars to control the drug markets, wars to distract attention from civil meltdown and imposition of police state provisions through incomprehensible “international” groups, cabals, gangs, known by one or a dozen names, best referred to as “organized crime.”

How we know that organized crime runs the world is that any person, any nation that speaks up, that stands against what is an obvious “wave of entropy,” is labeled a “terrorist madman.”

Today, we began by examining one false news story, Rupert Murdoch using what had, at one time, been a well-respected news organization as a front for a petty robbery.

Perhaps “petty” is the wrong word, as twenty billion dollars were bilked from Americans with only a few pages of fantasy, the “free press” at work, doing what it has been tasked to do, to “serve mankind.”

Within the realm of popular fiction, there are two examples of how governments work to recognize such situations and the deep concern that exists that news organizations tied to terror groups within our own governments are used on a regular basis to bring the world to the brink of war and beyond for profit.

First that comes to mind is “Three Days of the Condor” and the second is the TV series “Rubicon.”

Both are about intelligence groups based in New York City that find patterns. “Rubicon” was cancelled when it aired an episode that depicted a group within the CIA that sabotaged an oil tanker in Galveston Bay in order to manipulate oil markets.

Every other week, an American naval task force steams into the Straits of Hormuz, brushes up to Iranian waters or sends drones into Iranian airspace.

Why is the word “billionaire” so “yesterday?”

When petty banksters and financial scamsters are free to send out carrier battle groups or, as we have already seen, start wars and kill millions, the stakes are higher.

Those same computers that find the patterns also track the cash.

It is no longer “billions” but “trillions” that is being stolen.

When that kind of money is the subject and the kind of people we know are behind it, a few million dead is just the “cost of doing business.”