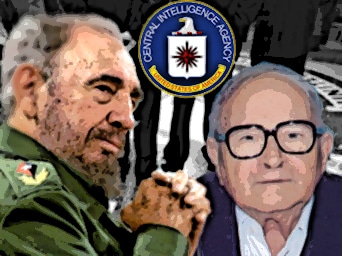 “Cuba had its ‘revolution’, but it was the CIA that put Castro into power.  Cuba did not really become ‘free’.”

(Editor’s note:  Years of FBI investigations into US money laundering tied to major financial organizations including Bain Capitol, the Bush family, Bank of America, powerful groups tied to AIPAC and the Cartels have led to Cuba.

Criminal cases were brought to the Ashcroft Department of Justice and suppressed.  Many powerful Americans faced prison for drug crimes and even espionage on a massive scale.

The files are ready, the evidence has been sequestered with law firms around the world, ready to file at any time a free government emerges with a desire for justice.)

Rafi Eitan, the Israeli spymaster, “is Castro’s business partner and the largest land-owner (of stolen land) in Cuba. “Israel is … one of the leading foreign investors in Cuba, with private Jewish businessmen involving themselves in everything from Cuban citrus exports to real-estate projects.” interview by Haaretz. How Zionist Pirates Hijacked America. Castro is a Sephardic Jew.

What about the Bay of Pigs invasion? It was made to fail. What about Operation Northwoods? It was vetoed.

The Cuban Missile Crisis was a psyop:

“My assertion that the presence of Soviet strategic missiles and their nuclear warheads in Cuba in 1962 is yet to be proved, is not a speculative, unsubstantiated hypothesis, but an incontrovertible fact…

“The Cuban missile crisis was just a small PSYOP – part of a larger PSYOP called the Cold War – whose purpose was to scare the American people into accepting the militarization of the American life.”

“To the CIA she was Donna: a Cuban spy who hid documents inside cans of food and sent secret messages via a clandestine radio and two tunes – a waltz and a song from the opera Madame Butterfly.

Today, Donna was revealed to the rest of the world as Juanita Castro – the sister of Fidel and Raúl, rulers of Cuba and legendary conquerors of US espionage efforts – when she blew the whistle on her career as a CIA agent.

The rogue sibling revealed extraordinary details of her hidden identity in a memoir, Fidel and Raúl, My Brothers: The Secret History, which could force a partial revision of the CIA’s role in Cuba. For half a century its efforts against Fidel were considered fiascos, prompting recrimination and ridicule. It tried and failed to kill him, tried and failed to invade Cuba, and tried and failed to foment revolt.”

The following is from: Fidel Castro Supermole

“In 1961 the Senate Internal Security Subcommittee issued a study entitled ‘Communist Threat to the U.S. Through the Caribbean.’

“The study features the testimonies of some senior U.S. government officers who firmly believe that Castro could not have been brought to power in Cuba without the continued assistance of the U.S. State Department.

Castro was educated at the privately funded, Jesuit-run Dolores School in Santiago.[24][25][26] In 1945 he transferred to the more prestigious Jesuit-run El Colegio de Belén in Havana.[1][27] Castro is a Billionaire According to FORBES MAGAZINE. As a young man Fidel actually joined the Partido Ortodoxo, an anti-communist political party. Splendor Amid Poverty

“The subject came up again in the course of a press conference held by President Kennedy on January 24, 1962.

“President Kennedy was asked about the security risks involving State Department employee William A. Wieland, who had helped Castro come to power according to three American ex-ambassadors in testimony before the Senate Internal Security Subcommittee…

“The impetuous fashion in which President Kennedy denied that Wieland was a security risk was, in Soviet eyes, further evidence that he was not what he seemed to be…

“There is also good reason to believe that, during his fight against Batista, Castro received support from Wieland when Wieland was the head of the Caribbean Desk in the U.S. State Department.

“Something that attracted the attention of the Soviets was the American haste to recognize Castro’s government after Batista’s escape on January 1, 1959.

“This haste was not only surprising to the Soviets, but also to some American diplomats…

“In January 7, 1979, just six days after former President Batista fled from Cuba and one day before Fidel Castro arrived in Havana, the U.S. officially recognized the Castro government…

“In his well read column Drew Pearson revealed, on May 23, 1961, that persistent rumors in the diplomatic corps indicated that the CIA had been helping to put Castro in power for years.

“The rumors had further stated that the CIA agents, in their efforts to get rid of President Batista, had supplied arms and ammunitions to Castro during his guerrilla war in the mountains…

“When he was in the Sierra Maestra fighting Batista’s troops, Castro received some weapons delivered by the International Armaments Corporation, the company that sent weapons to Guatemala, under the CIA’s orders, to overthrow Jacobo Arbenz’s government, and also because the Company was organized by Samuel Cummings, a former CIA operative…

“Also, there is evidence, that between October 1957 and the middle of 1958, the CIA gave no less than fifty thousand dollars to Castro’s men in Santiago de Cuba.

“On February 24, 1957, the New York Times published the first of a series of three articles written by its correspondent Herbert L. Matthews, who had interviewed Fidel Castro in the Sierra Maestra mountains in eastern Cuba.

“He depicted Castro as a liberal and a folk hero-a Latin American Robin Hood crusading against evil.

“One of Fidel’s closest followers, Armando Hart, commenting about the coverage and the high impact of Matthews articles, told Mario Llerena, the M-26-7 public relations man in the U.S., that both Matthews and the New York Times could be considered practically in their pockets.

“Knowing of the connections between the CIA and the New York Times, the Soviet intelligence analysts were understandably uneasy…

At first we thought Erdogan was one of the good guys. We were wrong.

“On February 4, 1958, Look published an extensive interview with Castro.

On February 25, 1958, the Times continued giving coverage to Castro and published an interview with the Cuban leader conducted by its correspondent Homer Bigart…

Cuba. By palomonte “Cubans today have a pretty low per capita income compared with other Latin American nations. They have fewer television sets, telephones, computers and cars relative to their population than most Latin American countries, and the lowest percentage of people with access to the Internet in the region, even below Haiti. And while Cuba does well in literacy and infant mortality indicators, it does lousy in others. Cuba has one of the highest suicide rates in the Americas.”

After 50 years, Cuba has little to show.

CBS broadcasted a special program by Taber and Hoffman entitled The Story of Cuba’s Jungle Fighters:

“As 1958 advanced … in the United States both the government and the press were becoming more and more favorably disposed towards Fidel Castro and his men.

“Thanks mainly to the selling of Fidel Castro by the American media, people all over the world were being conditioned to see Fidel’s guerrillas of the Sierra Maestra as legendary liberators of an oppressed people…

“Thus, Castro’s road to power was conveniently paved by the American government and media…

“U. S. Ambassador Smith commented that, during his mission in Havana, the pro-Castro leanings of the CIA station chief at the embassy was so evident…

“Testifying before the Senate Internal Security Committee on August 30, 1960, Smith affirmed that the chief of the CIA section in the American Embassy in Havana was pro-Castro, and that the number 2 CIA man in the embassy encouraged a revolt of Cuban navy officers against Batista in September, 1957.

“Ambassador Smith went further and accused the United States government, i.e. certain members of the Congress, the CIA, the State Department, as well as some segments of the press, of being directly responsible for Castro coming to power. ‘Castro never won a military victory,’ declared Smith…

“In October, 1957, one of three young American navy men who had joined Fidel that summer, was designated to go back to the U.S. in a propaganda mission on Castro’s behalf.

“The American entered the U.S. through the U.S. naval base at Guantánamo, with the full approval of American authorities, and received considerable publicity in the U.S. media.

“During his visit to the United States in April, 1959, Fidel received a lot of coverage in the American media.

“What the media barely mentioned, however, was that Castro visited the headquarters of the Council on Foreign Relations in New York, where he spoke on Cuba and the United States.

“Nor did the media cover Castro’s meeting of over an hour with a friendly, persuasive, and fluently Spanish-speaking representative of the CIA…

“One thing that seemed very suspicious to Soviet intelligence were the sudden American efforts to prove that Castro was a Communist.

“The Americans, who before Castro took power denied he was a Communist, now had changed their minds…

“According to the information the KGB had gathered, Fidel Castro never joined the Cuban communist party, nor any of the Communist front organizations. He was not a crypto-Communist, nor was he ever recruited by the Soviet intelligence services…