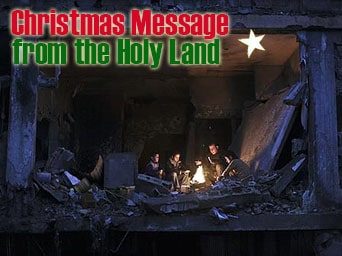 “Act and intervene, or nothing will change”

My first Christmas greeting this year came all the way from Bethlehem itself, just yards from where the Big Story is supposed to have begun 2012 years ago. My friend Jiries is a survivor of the murderous 40-day siege of the Church of the Nativity by Israeli troops in 2002.

These days, for me, Christmas has become a time to remember some of the extraordinary people I’ve met in the Holy Land…

And none is more extraordinary than the veteran Catholic priest in Gaza, Fr Manuel Musallam, who hosted a visit by a small group I was with in 2007. The Gaza Strip had been under tight blockade for 18 months following Hamas’s 2006 election victory and the mood was strained to say the least.

In the church’s school assembly hall I was surprised to meet so many Muslim students. On one wall hung a huge portrait of the Pope and on the adjacent wall an equally large portrait of Arafat.

Fr Manuel whisked us off to a meeting at the House of Fatah and from there we drove to see the Hamas prime minister Ismail Haniyeh and some of his colleagues, who received us with utmost courtesy and friendship and gave straight answers to straight questions. Haniyeh and Fr Manuel declared their unity to the TV cameras afterwards, emphasising that they were Palestinians first and Muslim or Christian second, in the struggle against a common foe.

When I got home to the UK Gaza’s health minister sent me, as he had promised to do, lists of desperately needed medical supplies and hospital equipment spares that had been blocked at the border by Israel. I forwarded these to my own Government direct and via my MP, but as far as I could discover they simply ignored them.

“Our love for God is in intensive care”

The following year – and who can forget it? – the Israelis launched their horrific 3-week blitzkrieg called Operation Cast Lead at Christmas-time and New Year 2008/9.

At the height of the killing spree, Fr Manuel sent this message from the smoking ruins to anyone who would listen:

“Our people in Gaza… eat but remain hungry, they cry, but no one wipes their tears. There is no water, no electricity, no food, only terror and blockade… Our children are living in a state of trauma and fear. They are sick from it and for other reasons such as malnutrition, poverty and the cold… The hospitals did not have basic first aid before the war and now thousands of wounded and sick are pouring in and they are performing operations in the corridors. The situation is frightening and sad.

“May Christ’s compassion revive our love for God even though it is currently in ‘intensive care’.”

A few days later he wrote:

“Hundreds of people have been killed and many more injured in the Israeli invasion. Our people have endured the bombing of their homes, their crops have been destroyed, they have lost everything and many are now homeless. We have endured phosphorus bombs which have caused horrific burns, mainly to civilians. Like the early Christians our people are living through a time of great persecution, a persecution which we must record for future generations as a statement of their faith, hope and love.”

When he retired in 2009 in failing health I remarked in an article: “I doubt if God has finished with him just yet. There’s a mountain of work to be done and good men are hard to find.”

And so it was to be. In the run-up to Christmas 2010 Fr Manuel was one of a trio of churchmen from the Holy Land touring Ireland to raise awareness of the plight of the dwindling Christian community under Israeli military occupation. He, Archbishop Theodosius Hanna (Greek Orthodox Church) and Constantine Dabbagh (Executive Director of the Middle East Council of Churches) showed they were more than a match for western politicians who fancied they knew all about the Middle East. “We need only one thing, to be protected by the world against the crimes of Israel,” was their central message.

And they made this stark plea: “Act and intervene, or nothing will change.”

Fr Manuel told Irish Government ministers and their foreign affairs committee: “I was in Gaza during the war [Operation Cast Lead] and suffered with my people for 22 days. I saw with my own eyes a phosphoric bomb in the school yard. I saw people injured by these phosphoric bombs, although these bombs are forbidden. These crimes against us were ignored by all the people of the world…

“What happened in Gaza was not a war. A war is a clash between soldiers, aircraft and weapons. We were victims, just victims. They destroyed Gaza. I was there and saw with my own eyes what happened. We in Gaza were treated like animals… We are not terrorists. We have not occupied Israel.

“All we ask of Israel is to respect us and not treat us like animals. We also ask parliamentarians and governments across the world not to give us food aid. We do not need cookies from Israel. We do not even need to trade with Israel. All we need is to be protected. We are suffering a war that we have endured for more than 60 years.”

“Be assured that Hamas will protect Christians in Gaza”

He told his listeners how he had seen the Israeli army target the Christian school in Gaza. “Five Hamas ministers visited the school after it was attacked and promised they would repair the damage… Hamas paid more than $122,000 to repair all the damage caused. Afterwards I met the Hamas prime minister, Ismail Haniyeh. When he embraced me he said this, and we believed it. He said: ‘Go to your family, but be assured that Hamas will employ weapons against Muslims to protect Christians in Gaza.’ This is the reality. Christians in Palestine are not suffering persecution, because we are not considered to be a religious community, but rather the people of Palestine. We have the same rights and the same obligations.”

He finished by describing how things really are. “We have spoken to Israel for more than 18 years and the result has been zero. We have signed agreements here and there at various times and then when there is a change in the Government of Israel we have to start again from the beginning. We ask for our life and to be given back our Jerusalem, to be given our state and for enough water to drink.

“We want to be given more opportunity to reach Jerusalem. I have not seen Jerusalem since 1990… We want to see an end to this occupation, and please do not ask us to protect those who are occupying our territory.”

Fr Manuel should have been a political leader. To improve the human condition, it seems to me, churchmen must also be politically minded and not afraid to ‘mix it’ with the out-and-out scoundrels who infest our political institutions and cloak themselves in a national flag.

The priest’s words are all the more poignant this Christmas after yet another bloody and cowardly assault on defenceless Gazans and the continued inaction, even connivance, of some (supposedly Christian) Western powers.

My Christmas message to Palestinians in the Holy Land therefore is, pray for a miracle.

And my Christmas message to politicians in the world outside the Holy Land is this: as Fr Manuel says, peace is possible if justice is possible, so get off your fat backsides and ACT to deliver JUSTICE.

Or go pack your bags, find other employment, for you offend all decent people.