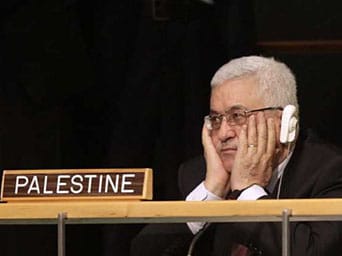 Empowered, emboldened… but what is the PLO doing with its new UN status?

The Palestinian Embassy in London has just issued a press release under the heading “Pressing need to halt Israel’s illegal settlement colonization campaign via political, legal, and diplomatic means”.

It complains about Israel’s “flagrant disrespect of international law” in announcing, the day after the UN upgraded Palestine’s status, a further 3,000 illegal settlement units in Palestinian East Jerusalem.

“It is time that political, economic and legal means are used so that Israel bears its responsibility for its violations and obstruction of peace efforts,” says Ambassador Manuel Hassassian. He wants the British government and the EU to ban Israeli settlement products and bar Israeli extremist settlers. “This is the only way to halt Israel’s illegal settlement campaign, salvage the two-state solution and revive the peace process.”

What’s more, he urges the British public to…

There has been a “pressing need” to halt Israel’s illegal settlement-building ever since the Allon Plan of 1967. But the PLO did remarkably little over the years to use the channels open to it until last month when it finally got around to applying for – and getting – non-Member observer status at the UN.

Why is the newly-empowered Palestine, fresh from its victory, still asking us to do the donkey-work? One hoped that President Abbas would waste no time in signing up to the Rome Statute and joining the International Criminal Court and the International Court of Justice in order to lay long-overdue charges against Israel for its illegal occupation, blockade, war crimes and crimes against humanity. First among the many legal options, surely, is to cut the endless whining and apply for an injunction against further settlement construction.

True, reports are circulating that Palestinian officials talk of filing war crimes charges and encouraging the international community to impose sanctions. But there may be a long wait before this Zionist-corrupted British government suspends trade with the thugs it repeatedly pledges to support and persuades its EU partners to do the same.

What if those 138 nations adopted BDS…

Now that access to the proper UN legal machinery is available for Palestinians, it is ridiculous to claim that EU and other sanctions are “the only way” to halt Israel’s illegal settlement campaign and salvage the two-state solution. Did 138 nations vote to upgrade Palestine’s UN status for nothing?

Only a few days ago Agent Cameron renewed his loyal pledge: “We said we’d resist calls for boycotts on Israel and yes – we are going to keep on working with Israel, doing business with Israel, trading with Israel.”

And earlier this month Agent Hague was saying that European trade sanctions against Israel were not an option. “I don’t think there is enthusiasm around the European Union … about economic sanctions in Europe on Israel. I don’t believe there would be anywhere near a consensus nor is that our approach.”

Even news that South Africa’s ruling party, the ANC, has adopted BDS (boycott, divestment and sanctions) as official policy is unlikely to push Hague and Cameron into making a humiliating U-turn and shafting their best friends in all the world. But if those 138 nations could be persuaded to similarly embrace BDS, who knows, it might do the trick.

Meanwhile, when asked what steps the British Government was taking to promote compliance with obligations under international law in the conflict between Israel and Palestine, Alistair Burt (Foreign Office minister for Middle East affairs) gave Parliament this soppy reply: “We repeatedly call on Israel to abide by its obligations under international law and have a regular dialogue with Israel on legal issues relating to the occupation, including settlements and the treatment of prisoners, including Palestinian children in military custody.”

“We have consistently condemned Israel’s announcements to expand settlements in the Occupied Palestinian Territories, including East Jerusalem… We look to the Government of Israel to take all necessary steps to prevent settlement construction.”

And when Jeremy Corbyn asked what steps were being taken to make sure Israeli settlements are excluded from all EU and UK agreements with Israel, Burt replied that UK and EU guidelines do not currently differentiate between products from Israel or from the Occupied Palestinian Territories. He said the EU Foreign Affairs Council was working on measures to ensure that settlement produce does not enter the EU duty-free, under the EU-Israel Association Agreement, and that EU-wide guidelines are issued to make sure that settlement products are not incorrectly labelled as Israeli produce. But there are currently “no plans for EU or domestic legislation on this issue”.

So much for ‘dialogue’.

The ball is now in the PLO’s court. Before telling us what WE must do, Mr Ambassador, let’s see evidence of what the PA/PLO are doing, if anything, after their heady success at the UN three weeks ago.

Here was a chance for the Palestinian leadership to show us what they’re really made of. But it seems they’re stuck in same old time-wasting groove.