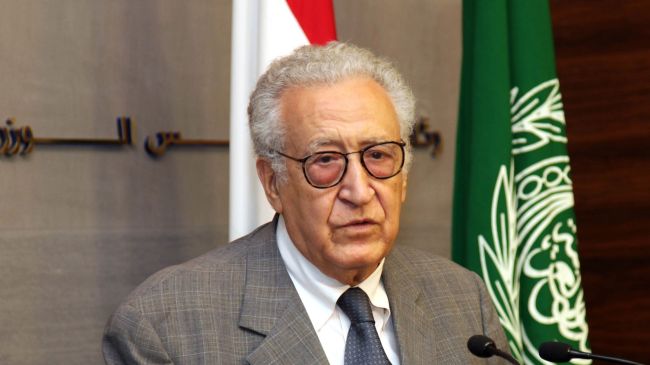 Foreign powers should stop seeking financial and political gains through fueling the fire in the ongoing crisis in Syria, an analyst tells Press TV.

In the background to this, the United Nations (UN) Arab League Special Envoy to Syria Lakhdar Brahimi has invited the Syrian government and the opposition to hold talks at the UN. Brahimi said on Sunday that since both the Syrian government and the opposition have expressed readiness to hold talks to end the country’s unrest, he invites them to start negotiations in the UN offices.

Press TV has conducted an interview with Mike Harris, Financial Editor, from Veterans Today in Phoenix, US to further discuss the issue. Harris is joined by Ala’a Ebrahim, Journalist & Political Commentator, from Damascus and Sharif Hikmat Nashashibi, Chairman of Arab Media Watch, from London. The following is a rough transcription of the interview.

Press TV: What about it Mike Harris as Mr Nashashibi just said. That even the head of the UN is saying that Bashar al-Assad should step-down. Is it the role of external forces to demand and setup preconditions even prior being able to talk?

Harris: I think the Syrian government needs to be really careful here about what invitations they accept because even sitting down and negotiating with the rebels, or the opposition as you want to call them, that validates them that gives them legitimacy.

Lets look a little deeper here because I’ve heard several times on the show that the opposition is foreign-backed.

So, why do we need to have discussions with the rebels? Why doesn’t the Syrian government go directly to these foreign powers who are overtly meddling in Syrian politics?

Press TV: What are you proposing what do you mean, go directly to foreign powers? Should they sit down directly? Expand [on that] please.

Harris: Who’s sponsoring these rebels? That’s the question you know.

Find out who the sponsors are, deal directly with them, cut the rebels out of there, stop the killing. It’s not necessary to go on.

If a foreign government wants to upset and overturn a sitting president of Syria, shouldn’t they come out and be honest about it instead of working through surrogates?!

Lets put credit where credit’s due. Lets look at who is looking to unsettle or unseat Mr Assad.

Press TV: Mr Harris lets take a look at some of the comments that were made and our previous discussion [that we talked about] already. In general it seems we know the Syrian opposition is backed by many foreign countries.

When is the line, what is the line between a revolution that usually means evolving from the people and a people movement, and when you have interference by other countries. Where is the line drawn in your perspective?

Harris: I support the people’s right to self determine the government they are going to select. That’s a fundamental point for all the people around the world that’s something should not be interfered with.

Now, I do not approve of foreign powers meddling in a country in order for economic or financial gain. I think that is completely unethical and something that shouldn’t be done or be tolerated.

So, it’s really up to the Syrian people as [to decide] what is their level of tolerance.

Would they like the existing regime? What changes would they want? Do they want it to become fundamentally more democratic?

Where are they willing to go and what is Bashar willing to give up in order to keep the peace and maintain his position as president?

These are questions that the Syrian people need to answer free of a foreign interference altogether, just free of it.

Press TV: Mr Harris it does seem that even though the suggestions for another [round of] talks are going on as we speak. Today again has been a very violent day, there have been more attacks.

I want to look at the world though of Russia and China in all of this and [their] balance in this act. Because up until now they have vetoed every measure that the western powers were trying to take inside of Syria.

How important is their role and do you think that role could actually force the hands of both sides? Because we known that several Arabic countries are supposed to be going to Moscow. Do you think it is possible to force their hands at this point and actually bring them to the table in order to talk both [with] sides together?

Harris: Let me make a comment first and that is there is no greater tragedy that any country can experience than that of a civil war.

So, we have to find a way to get the parties to agree and come to some sort of peaceful resolution.

That’s foremost that should be everyone’s goal, both the opposition and the regime’s goal because a civil war is an unmitigated tragedy.

As far as the role of Russia and China and the leverage that they have, it should be pretty substantial.

So, Russia has a significant influence over the current regime.

These things need to be brought to bare to make all parties. You see a good compromise is something that everyone hates because everyone has to give up something.

So, what I think we should strive for is a set of compromises that there is no clear winner that everyone takes a little bit… gives a little bit in order to keep the peace in the country.

Because it’s not worth going into a civil war to see so many people killed, needlessly killed just to put pressure on the government and stop this insurgency.