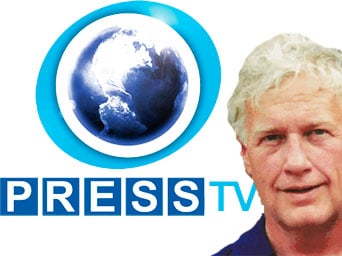 What we know is that the weapons that this young man is accused of using came through Turkey; they were supplied by NATO, there is no question about this, the group is claimed by the United States…. if you want to accuse him of something he could just as easily have been arrested if he’d failed to shoot at Syrian army helicopters. I have no idea what the crime is here other than it appears that the CIA and FBI don’t know what each of them is doing. Which by the way it’s not the first time that that’s happened.”
An intelligence analyst says the recent FBI arrest of US soldier and alleged CIA agent, Eric Harroun, for joining foreign-backed militants in Syria is a mockery of US operations as it shows the CIA and FBI’s disunity.
The comment comes as Harroun’s father Darryl says his son was serving the CIA in Syria and reporting back to the Agency from the country.
He says his son, who was arrested and charged with conspiracy on Wednesday for fighting with al-Qaeda-linked militants, is extremely patriotic and would not join militants.
However, the FBI affidavit mentioned no word of Harroun working for the CIA.
Harroun, 30, was arrested upon arriving at Dulles International Airport in Virginia, after fighting with the notorious al-Qaeda-linked al-Nusra Front in Syria since January.
The detained soldier has confessed to shooting 10 people and using a rocket-propelled grenade while in Syria and being involved in downing a Syrian chopper. He is also charged with plotting to use a weapon of mass destruction outside the US.
Press TV has conducted an interview with American intelligence analyst Gurdon Duff in Ohio to further discuss the issue. What follows is an approximate transcription of the interview.
Press TV: How likely is this? What the father of this young man is saying that basically he doesn’t even understand what’s going on because his son was working for the CIA?
Duff: I have very well doubted his son was at least in contact with the CIA. Within these special operations in the US and with the publication that represent that community at least two companies that are owned by close friends are operating in that area, working for the CIA in support of the same groups that are now said to be al-Qaeda.
So we have two problems, one that we have Americans exactly like the one arrested directly in the employment of the CIA, organizations that are working there I can name these people, operational security prevents it unless of course someone decided I had to go to court and testify for him which I would be able to do.
I also know the US delta force operating in Jordan, the US Special Forces in support of this same organization that they are now saying if al-Qaeda…
Press TV: Gordon what exactly does that mean? If what you are saying is true that the same organization that the state department and the US government in general is saying is al-Qaeda-linked but you are saying that you have sources that you know, that some military units or intelligence units of the United States are involved with this group. What exactly does that mean?
Duff: These people are personal friends. I talk to them on a regular basis. I know where they are. I know what they are doing. Additionally the Israeli government openly admits that it is giving at least medical aid, we know much more than that to this same group that is now calling itself al-Qaeda.

Plus we have two issues in the US. Until a couple of days ago the Obama administration denied that there were al-Qaeda operatives operating in Syria and it was our opposition party in the US that was accusing the president of supporting al-Qaeda in Syria, the insanity of this is almost unparalleled because how can someone know what group is al-Qaeda or not?

What we know is that the weapons that this young man is accused of using came through Turkey; they were supplied by NATO, there is no question about this, the group is claimed by the United States, if you want to accuse him of something he could just as easily have been arrested if he’d failed to shoot at Syrian army helicopters.
I have no idea what the crime is here other than it appears that the CIA and FBI don’t know what each of them is doing. Which by the way it’s not the first time that that’s happened.