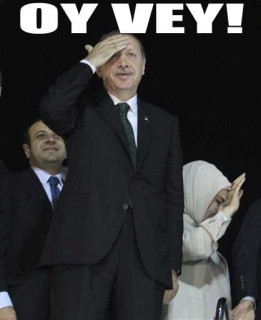 When Turkish Prime Minister Recep Tayyip Erdogan joined the Western-backed alliance against Syria, all observers agreed that Erdogan’s momentous choice was the biggest gamble of his career.

By jettisoning Turkey’s successful “zero problems with neighbors” policy, and supporting a foreign-backed insurgency against Syria, Erdogan was staking his career on the hope that Assad’s government would quickly fall, and Turkey would help form the new government.

And now he is reaping the consequences.

During the past two weeks, protests have spread like wildfire across Turkey. Some of the protestors are Erdogan’s natural political enemies: Secularists opposed to the gradual democratization and Islamization of Turkish society. But whatever the role of the Kemalist “secular fascists” in instigating the protests, polls show that the anti-Erdogan movement has gained traction for one main reason: Erdogan is viewed as authoritarian and dictatorial.

After all, Erdogan claimed he was helping the Zionist-run US and its regional puppets overthrow Syria’s Assad for one main reason: Because Assad was authoritarian and dictatorial.

So Erdogan made the authoritarian and dictatorial decision to use Turkish territory for foreign-sponsored attacks on Syria, despite polls showing that Turkey’s “zero problems with neighbors” policy enjoyed virtually unanimous support.

From the moment Erdogan decided to join the US-Zionist empire’s attack on Syria, his decision was wildly unpopular. Polls showed that roughly two-thirds of the Turkish people opposed the move. But the authoritarian and dictatorial Erdogan continued to push ahead, even as the grumbling against his Syria policy got louder.

Now it looks like “regime change” will happen in Turkey first.

The irony was not lost on the Syrian government, which has issued travel warnings urging Syrians not to travel to Turkey until the unrest cools down. Will a “Free Turkish Army” begin carrying out terrorist attacks in Turkey from bases on Syrian soil? Let us hope Syria’s government resists the temptation.

Until two years ago, Erdogan was widely viewed as one of the world’s canniest and most successful politicians. Whatever was he thinking when he decided to jettison the popular and successful “zero problems with neighbors” policy, and create gargantuan problems with Syria, one of Turkey’s most important neighbors?

I believe Erdogan misjudged the situation due to his own character, background, and ambitions. Like Obama, Erdogan is the kind of person who presents himself as an idealist and an agent of change, but is actually a weakling who is prone to compromise too easily when bullied by the powers-that-be. Caught between the demands of the people of the Middle East for democracy and Islam on the one hand, and the perpetual US-Zionist imperial assault on the other, Erdogan has tried to resolve the contradiction by crafting a kind of democratic Islamic society that would be acceptable to the imperialists.

Erdogan’s attempt to balance democratic Islam with the harsh demands of imperialism was made more difficult by the persistence of a criminal “deep state” in Turkey. Financed by billions of dollars in drug money and illegal weapons dealing, and fully backed by the US, NATO, and Israel, the Turkish “deep state” – the local wing of Operation Gladio – virtually owns the Turkish military and is capable of launching a coup d’état at any moment.

FBI whistleblower Sibel Edmonds has revealed that elements of the Gladio-linked Turkish deep state were used by neoconservative moguls Richard Perle and Douglas Feith to finance the 9/11-anthrax coup d’état of September 11th, 2001. Obviously it is these people, not Erdogan, who hold the real power in Turkey.

Graham Fuller, the notorious rogue CIA official who has been linked to the false-flag bombings in Boston, has long been a key player in the Gladio “deep state” in Turkey and Central Asia. When I visited Turkey in 2011, I was told that Fuller had spent the fall of 2001 dispensing death threats to Turkey’s leading international affairs journalists, warning them not to question the official version of 9/11 or they or their families would be targeted.

In other words, the local drug-dealing CIA warlord runs the Turkish media. Some “democracy.”

If Erdogan (or any other Middle Eastern leader) really wanted to create a democratic and Islamic society, he would have to do what Iran’s Ayatollah Khomeini did: Destroy the imperial agents of the “deep state” by imprisoning, exiling, or executing them. (Perhaps, in some cases at least, rehabilitation would also be an alternative.)

Obama would have to do more or less the same thing if he wanted to bring real democracy to America – like JFK tried to do fifty years ago.

But Erdogan, like Sheikh Hamad of Qatar, is no JFK and no Ayatollah Khomeini. Like Hamad, Erdogan imagines that he can position himself as “pro-democracy” while remaining a puppet of the empire and its vicious local stooges.

Whether or not Erdogan survives the present unrest, Turkey can and must continue its journey away from Kemalist secular fascism and towards Islam and democracy. To do so, it should follow in the footsteps of Erdogan’s predecessor, Necmettin Erbakan, and neutralize the Gladio “deep state” in order to shake off imperial-Zionist control and assert true independence.

When the Zionist-dominated US empire orders Turkey to create problems for its neighbors, a genuinely democratic and independent Turkey would be able to say “no.”