VT colleague Jim Fetzer and I have a new TV show, “Dynamic Duo Weekly News,” broadcast every Wednesday 11 to 11:30 Eastern on NoLiesRadio.org.

Netanyahu and the Zionists have been claiming Iran is about to get “the bomb” since 1984, which makes him the “Chicken Little” of the Middle East.  His anti-charm offensive appears designed to distract attention from the resolution of the Syrian chemical weapons supply, since Israel itself has a vast stock of nuclear, chemical and biological weapons it has never disclosed.  What Netanyahu said to the UN, however, is predicated upon two provably false assumptions:  (1) that Iran wants to “wipe Israel off the map”; and (2) that Iran has a nuclear weapons program.  The first is predicated on what has to be a deliberate mistranslation; the second contradicted by US intel conclusions of 2007 reaffirmed in 2011. 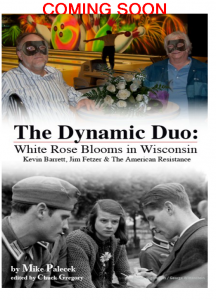 Pre-order NOW from CWGPress!
This means that the sanctions being imposed upon Iran by the US are unjustified and represent a form of collective punishment, which was declared to be a war crime by the Nuremberg Tribunal. While Israel has a history of “false flag” attacks, Iran does not, including the 1967 (not 1976) attack on the USS Liberty. An Israeli assault on Iran’s nuclear facilities would bring about the deaths of 1,000,000 Iranians outright and another 35,000,000 premature deaths as the cloud of contamination swept across Afghanistan, Pakistan and India–six times the alleged 6,000,000 who died in the Holocaust to secure Israeli domination of the Middle East.
His allegation that Iran committed attacks in Argentina in 1992 and 1994 are especially hypocritical, since Netanyahu is more likely to have been behind them than Iranian President Rouhani. (See “False Flag attacks in Argentina: 1992 and 1994” with Adrian Salbuchi.) Obama may be buckling under pressure from Israel, but the GOP is likely to pay for shutting down the government during the next mid-term elections. An unacknowledged dimension is that Iran can produce nuclear fuel rods for 3rd world nations more cheaply than the US nuclear energy industry, which does not want the competition from Iran. US foreign policy appears to preclude sending foreign aid to nations that have undeclared WMDs. Israel knows which politicians to pressure and how based upon information being sent directly to Israel by the NSA.
Even the Kenyan mall attack may be another “false flag” attack, where the mall is owned by some of those who were responsible for transferring ownership of the World Trade Center to Larry Silverstein in advance of the 9/11 attacks, in which Israel was profoundly involved, as articles by Alan Sabrosky, a book by Christopher Bollyn and the web site, “Israel did 9/11 — all the proof in the world!” but which also appears to have involved the complicity of neo-cons in the Department of Defense. Frank Lowy, like Larry Silverstein, should be regarded as a person of interest, not only in relation to 9/11 but also the Kenya mall attack.  For recent research on 9/11, see “The Midwest 9/11 Truth Conference” YouTubes now on-line.
Differences in interpretation about “Obamacare”…Kevin doesn’t like the federal government forcing people to buy private insurance thereby enriching the world’s most corrupt people (the financial elite), while Jim thinks it is okay, just like people being forced to buy auto insurance.
Seymour Hersh has told the UK Guardian that the attack on the compound in Pakistan was a completely contrived event. Osama bin Laden died on 15 December 2001, where David Ray Griffin has a book about it. Nick Kollerstrom, an article, Even FOX NEWS announced his death on 26 December 2001, which you can find on-line.  And see Jim’s article, “Zero Dark Forty: A deeper,darker truth”.  The government has admitted that Charles Taylor, a war-crimes suspect, was a CIA agent and, perhaps even more surprisingly, has also admitted the CIA under Kermit Roosevelt overthrew the democratically – elected governnent of Iran in 1953. There is no good reason for the US to suspect Iran, which has never sought to overthrow the US government.
Hersh’s point re the abdication of responsibility by the MSM is exemplified by Rachel Maddow’s claim that the Sandy Hook 9/11 calls not be released without knowing what they contain, especially given efforts by the State of Connecticut to suppress information and the available evidence that it was a contrived event as an anti-gun “psy-op” and where it appears to be the case that no children actually died.  James Tracy of Florida Atlantic University has now prevailed in his attempts to defeat censorship by his own institution to inhibit him from publishing on Sandy Hook, the Boston bombing and other fabricated events to mislead and deceive the American people, which is a small but not insignificant victory for freedom of speech.