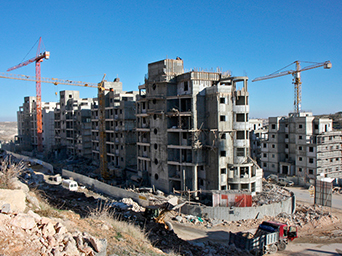 The Palestinian leadership won’t do it – will you?

Unbelievably, President Mahmoud Abbas and his hapless crew in Ramallah promised the US not to file charges against Israel in the International Criminal Court. Meanwhile the Israeli regime is accelerating its squatter programme on Palestinian territory even in the middle of so-called peace talks, increasing its air strikes and generally upping its aggression.

The building of illegal squatter settlements has been going on unchecked since 1967, the aim plainly being permanent occupation and eventual annexation. Yet the Palestinian leadership remains fearful of using the proper legal channels to pursue legitimate claims to freedom, self-determination and the return of their lands. Abbas prefers instead to cling to the discredited, ‘kangaroo’ peace process promoted and facilitated by crooked elements in the US administration allied to AIPAC and other pro-Israel influencers.

It has been clear for some time that civil society and Palestinian solidarity movements around the world must come together and prod the ICC into taking action on its own initiative against Israel’s war crimes. One of the most urgent issues is the illegal transfer of portions of Israel’s population into squats or ‘settlements’ on stolen Palestinian lands. Over 600,000 Israeli squatters are now reckoned to be deliberately parked on the wrong side of the border in order to colonise choice areas of the West Bank, and they will be joined by thousands more as a result of new settlement construction tenders recently issued by the Israeli authorities in defiance of international law and the Geneva Conventions of 1949. Many of the squatters are armed thugs, hooligans and vandals, dedicated to harassing local Palestinian communities and wrecking their property. The UN says the colonisation is “creeping annexation”.

It is imperative that these crimes and abominations are not only halted but reversed. Palestinians are entitled to rid themselves of the squatter menace. But who’s to start the legal ball rolling? Who can be trusted to resolutely press the Palestinian case?

A further warning comes in a report https://www.middleeastmonitor.com/news/middle-east/9071-pa-offers-to-sell-egypt-fuel-donated-to-gaza-by-qatar that tells of a confidential letter in which the Palestinian Authority offered to sell Egypt fuel donated by Qatar to operate Gaza’s power plant. As the whole world knows, the Gaza Strip has been in the grip of a power crisis for nearly 8 years as a result of Israel’s blockade. Very little of the Qatar consignment reached Gaza, says the report. And recently, when the tanks ran dry, the situation became acute, bringing Gaza’s fragile economy and public services to a standstill and causing great hardship and danger to public health.

Interestingly, the report says Qatar intervened to solve the latest electricity crisis in Gaza and paid $10 million to the Palestinian Authority to meet the value-added tax on fuel which it had increased without notice. If the story is true, it illustrates the kind of low-life Abbas has surrounded himself with. Quite obviously such people cannot be entrusted with the hopes of an oppressed nation.

So it’s up to civil society to set an example, brush aside the political posers and take direct action. As it happens a specially drafted letter to the ICC has suddenly popped into my inbox. It appears to have originated from the Sabeel International Conference in Jerusalem last autumn. Sabeel is a peace movement formed by Palestinian Christians in the Holy Land. The idea is for thousands of copies of the letter to be sent by individual activists and groups from all over the world. I hear the wording has been put through the wringer by a legal team, so activists are asked to stick to the suggested text – simply copy and paste it into your word/document program, add the date and your name and address, print, sign and post (by snail-mail).

Here it is, almost verbatim…

The Information and Evidence Unit

Office of the Prosecutor

I urge that an investigation be initiated by the Office to determine whether war crimes have been committed in connection with the transfer of civilian population into territory of Palestine that is under the belligerent occupation of Israel. Power for the initiation of such an investigation would appear to exist under Article 15 of the Statute of the International Criminal Court.

It is my understanding that such transfer has occurred in a manner that appears to constitute a violation of Article 8 (2) (b) (viii) of the Statute. From facts available in the public domain, such transfers have risen to the level of seriousness required for action by the Court. Transfers of thousands of civilians have occurred. Harm has been caused to thousands of victims.

The fact of a violation of the comparable provision of the Geneva Convention Relative to the Protection of Civilian Persons in Time of War of 1949 has been determined by United Nations organs, including the General Assembly, the Security Council and the International Court of Justice. That provision applies to actions of a state. These organs have determined a violation by Israel.

Transfers are continuing at present in great numbers, consequently the crimes in question are ongoing. The matter is now pressing and I therefore feel it imperative that an investigation be initiated without delay, lest additional thousands of persons be victimised.

I only heard about it by chance. If good ideas like this are to work they need the support of large numbers. Therefore the various proactive groups must come closer together, communicate and co-ordinate! Has the letter taken off? Have thousands been sent? I simply don’t know… But I’m posting mine today.