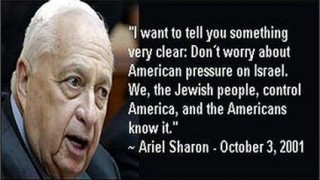 May this man roast on the eternal fires

It was early October 2001. I was driving through the Shorewood neighborhood of Madison, Wisconsin, listening to BBC News on WORT listener-sponsored community radio.

The BBC announcer reported on an Israeli cabinet meeting: Shimon Peres had been pressuring Ariel Sharon to respect American calls for a ceasefire, lest the Americans turn against Israel.

According to the BBC, a furious Sharon turned toward Peres, saying:

“Every time we do something you tell me Americans will do this and will do that. I want to tell you something very clear, don’t worry about American pressure on Israel. We, the Jewish people, control America, and the Americans know it.”

I was stunned. Such colossal arrogance!

After a moment’s thought, it wasn’t so much the arrogance that was so stunning – it was that the BBC had reported Sharon’s indiscretion. Now it was on the record – undeniable – an ineradicable part of the national dialogue and the historical record. Surely the American mainstream media would plaster this story all over its front pages! This could start a long-overdue national dialogue about the power of the Israel lobby. It could even be a turning point – the end of America’s slavish subservience to Israel.

At the very least, it would start a national debate: Was Sharon right? Or was he exaggerating?

During the next several days I scanned the media in vain for any reference to Sharon’s boast. There were none. The story had been buried. It was as if it had never happened.

Sharon’s “we Jews control America” quote was outrageous, scandalous, and attention-getting. Translated into screaming front-page headlines, it could have sold newspapers. Surely the commercial media, always in it for a buck, would milk the outrage factor for every penny it could squeeze out of it.  Right? Wrong.

For some strange reason, the BBC report vanished into the aether.

In 2005, when Sharon resigned as Prime Minister, I called into a WORT talk show hosted by an Israeli woman who was showering Sharon with respect – a strange way for an avowedly leftist, peacenik station to treat one of history’s worst war criminals.  I asked her why the media had buried Sharon’s “we Jews control America” rant. She flew into a rage, called me an anti-Semite, and hung up on me.

So why DID the US media bury Sharon’s quote? Former New York Times journalist Phillip Weiss has offered the most plausible explanation. He says the majority of decision-makers in American mainstream journalism are Jewish, and that they feel like they are Israel’s last line of defense.

It seems Sharon won his argument with Peres. Jewish Zionists control America so completely that when the Israeli Prime Minister screams it from the rooftops, Americans are not allowed to hear it.

As VT’s Gilad Atzmon says: “Jewish power is the ability to get us to stop talking about Jewish power.”