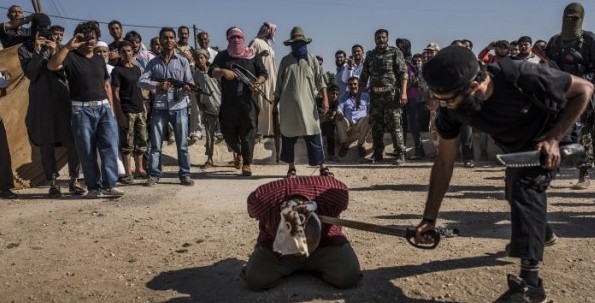 The phone rang early this morning, but it is always nice to get a call from Press TV for a quick news interview, especially one so dear to my heart as America’s regime change foreign policy.

I must have been in a comma when the 12 months of town hall meetings were held all around the country before we voted on the refferendum to have an offensive foreign policy during peace time.

And to that you can add converting our military over to what Marine General Smedley Butler called being the muscle for American business interests.

This holding peace conferenc to declare victory and demand a rigged election to put an Ameican puppet one in as part of the Balkanization of Syria…excuse me but I don’t see any Founding Fatherism in any of that.

Yes, I know…I just invented that word, ‘fatherism’. It was a cute joke to compare that to the big joke of an official foreign policy of spreading freedom and democracy around the world. It has become THE big bad joke, if not for the growing pile of bodies that never voted to be killed by America’s new proxy terror forces.

Whereas Obama made some fortunate moves by stopping a military assualt on Syrian over a totally orchestrated mass killing, done purely as a set up for such an attack. And he has had the wisdom to end the bogus Iran nuclear threat silliness before that killed a million people and made tens of millions homeless.

But the Obamites seem to be going for broke trying to snatch victory from defeat. I can’t help but feel that all of those dual Israeli citizens in the upper rankes of the State Dept. have had their finger in the big regime change pie. The Manchurian candidates all turned out to be Israelis.

The two minute audio interview can be seen here.

The Obama administration’s regime change policy for Syria is another example of the failed American strategy in the Middle East, VT columnist Jim W. Dean says.

“It’s another example of nonsensical American strategy, and while it’s going on, more and more Syrians are dying and suffering,” Dean told Press TV on Wednesday.

“Totally there’re some idiots thinking that they want to play a colonialist empire in the Middle East in 2014,” he added.

During his opening statement Wednesday at a conference about the Syria crisis, US Secretary of State John Kerry insisted that President Bashar al-Assad should not be part of a transitional government.

The Syrian government and members of the opposition gathered in Montreux, Switzerland, for negotiations aimed at ending the country’s three-year unrest.

Dean said, “It really hasn’t come as a surprise to see the US still going for broke now on having Assad removed as part of any type of ‘settlement’.”

“What the Obama administration is trying to do now is although [its strategy] has been a disaster- they’ve basically lost- they’re continuing the war in terms of having a settlement by basically saying that anybody that wants to come [to the talks] like Iran, you’d have to agree that we win,” he stated.

“Why should Assad step down when all he said is if we have an election and I don’t win, the people reject me, I’m gone. And for Western countries that promote democracy it’s an absolute astonishment to say that oh no we can’t wait and have an election, we want you out now,” the columnist argued.