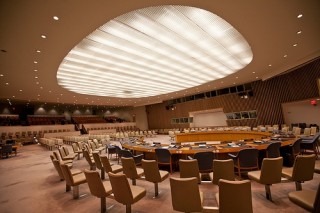 According Samantha Power, US ambassador to the UN, “Russia has used its veto as an accomplice to unlawful military incursion.”

How ironic. Substitute “US” for “Russia,” and you could be describing US behavior as regards the Israeli occupation of Palestine.

The 41 US vetoes include numerous resolutions condemning the construction of Israeli settlements in occupied Palestine, which are illegal under the Fourth Geneva Convention. The Obama administration last blocked Security Council efforts to force Israel to end settlement construction in February 18, 2011. You have to question the President’s sincerity in the current Middle East peace process. For peace negotiations to be fair, surely they must start with an absolute requirement that Israel abide by international law.

Other resolutions condemn Israeli for massive human rights violations against Palestinian civilians, their illegal war of aggression against Lebanon and Gaza, and their illegal expropriation of land in the West Bank, the Golan Heights and East Jerusalem. The US also vetoed a call for the UN to investigate Israel’s role in the murder of UN Food Program workers and countless Palestinian civilians

Since 1972, the US has vetoed more Security Council resolutions than any other permanent member. In addition to vetoing resolutions on Palestine, it has vetoed fourteen resolutions condemning South Africa’s apartheid regime, one each condemning illegal US military aggression against Nicaragua and Panama and one condemning the illegal British war in the Falklands.