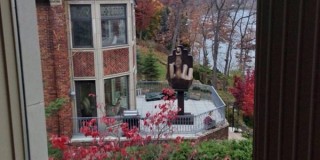 A woman in California isn’t happy with her local authorities. So she’s putting up a giant middle finger statue in her front yard.

This got me to thinking. What have those local authorities got that Washington, DC hasn’t got?

It’s springtime. The birds are chirping. The bunnies are humping, I mean, hopping. Why stay indoors on your computer, flinging verbal venom at the psychopathic serial killers in our nation’s crapital, when you could be outside on the lawn, soaking up some sun aiming a giant middle finger statue at them?

Image a nation with a couple of hundred million front lawns each featuring a bird-flipping colossus giving the digitus impudicus to D.C. Now THAT is the kind of country I wouldn’t mind living in!

The Founding Fathers would be proud. I understand that they have given up rolling over in their graves; now their worm-nibbled skeletons are slowly raising their right arms and extending their middle finger bones.

Muslims achieve a feeling of togetherness by all turning to face in the same direction when they pray – toward the kaaba in Mecca. So why shouldn’t Americans come together in our shared loathing of the bastards in DC, by building a few hundred million giant middle finger statues all pointing thitherward?

Objections, naturally, will be raised. Some will say: What about the people who live in Washington, DC? Not all of them are AIPAC-addled congress-critters, Constitution-butchering judges and justices, White House appendages, Pentagon war criminals, or other illuminati arch-villains. In what direction will the handful of nice, ordinary people in DC point THEIR giant middle finger statues?

If they flip their giant concrete birds at the White House, then they’re ignoring Congress, the Supreme Court, the CIA, and a lot of other creeps. Ditto if they choose any of the other targets.

What America needs is an omphalos – a national navel toward which all Americans, including those in DC, could raise their middle fingers skyward.

If the kaaba is the omphalos of Islam, symbolizing the God toward which all monotheists turn, perhaps the George Washington monument could serve as the omphalos of the post-9/11 police state usurping what used to be America.

True, most people see the Washington Monument as a giant phallus, not a giant middle finger. But since the extended middle finger is itself a sort of symbolic phallus delivering the “up yours” message, it seems to me that DC’s great stone obelisk, with a few minor modifications, could become the national symbol of illegitimate authority toward which all Americans unite in flipping off a big one-gun salute. 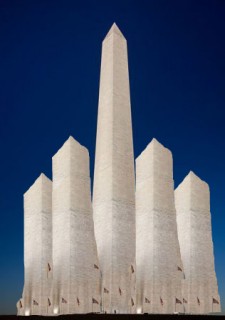 I proposed this idea at my local town hall meeting yesterday and got a very enthusiastic response: 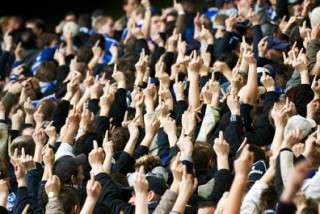 The patron saint of our new national salute will be – who else – the late, great Johnny Cash.

But before implementing this concept, and starting a national movement to build middle-finger statues on everyone’s front lawns, I figured I had better ask permission from the one government that deserves to get flipped off even more than America’s does. So I called up Netanyahu, who quickly put the kibosh on my idea.

“I don’t care what Dan Brown and his freemason friends say – the one eternal and undivided capital of the New World Order is ISRAEL not Washington DC!” Bibi screamed. “The world must make its undying salute of sacramental hatred in OUR direction or we’ll nuke all the capitals of Europe!”

So Bibi and I are now working on a plan to place a giant quenelle statue in the middle of Rothschild Plaza in Tel Aviv.