Why do so many in America accept journalistic and scholarship intimidation and censorship? 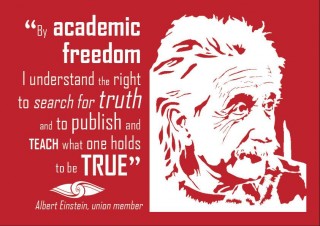 For the first time in history, an American university has hosted an event questioning the official stories of 9/11, the JFK assassination, and the Nazi holocaust.

The conference, entitled “Academic Freedom: Are There Limits To Inquiry?” was held yesterday, April 26th, at the University of Illinois Urbana-Champaign.

[Read about my presentation on “Facts, Insults, and Academic Freedom”]

Of the three topics, by far the most contentious is the holocaust. Polls show that about two-thirds of Americans doubt the official version of the JFK assassination, while about one-third are 9/11 skeptics. Most professors who critique the official stories of JFK and 9/11 do not lose their jobs. (I was the unlucky exception; in 2006 I was targeted by a political witch-hunt designed to discourage 9/11 skepticism in the academy.)

But the holocaust is different.

Many Americans who question the official versions of 9/11 and the JFK assassination have contacted me to ask why I would associate with holocaust revisionists. They are afraid that the holocaust issue is so taboo that anyone who comes near it will get lynched.

My answer: That is precisely why I want to participate. The persecution of holocaust revisionists is wrong. People should not have their lives and reputations ruined for doing historical research and reporting their sincerely-held conclusions.

And yet in today’s USA, a scholar who questions the sacred narrative of the Nazi holocaust is committing career suicide. Europe is even worse.

Did the Germans really murder six million Jews, most of them in gas chambers, as part of an official policy of complete extermination? To even ask the question is heretical in the West.

Yet in Morocco, where I did my Ph.D. research on a Fulbright fellowship, every scholar with whom I discussed the topic sided, to a greater or lesser extent, with the revisionists. Many of these scholars had read dozens of books on the topic. I had read none. Still, I thought the holocaust revisionists were almost certainly wrong.

Then about five years ago, I read a book purporting to refute the revisionists: Denying History by Michael Shermer and Alex Grobman. From this book I learned that the official Auschwitz death total was revised downward from 4 million to 1.5 million in 1989. Yet the official “holocaust” total remained at 6 million.

Shermer and Grobman explain that around 1989, at the exact moment that 2.5 million Auschwitz victims disappeared, historians revised upwards the total number of Jews killed by firing squads on the Eastern Front…by precisely 2.5 million. The result: The sacred 6 million figure remained enshrined.

Shermer and Grobman also explained that a thick blue coating of hydrogen cyanide (Zyklon B) has been found in certain rooms in the Nazi concentration camps. The problem: These rooms are admitted by all historians to have been de-lousing chambers in which clothing and bedding were fumigated to prevent typhus outbreaks. No such “Prussian blue” has been found in any of the ostensible gas chambers. Shermer and Grobman claim that this is because more Zyklon B was necessary to kill lice than to kill people.

Shermer and Grobman (and others who defend the official story) admit that there is relatively little hard forensic evidence that millions were killed in gas chambers. They also admit that there is very little documentary evidence that the Germans launched such an outrageously complex, expensive, ambitious, wasteful, and logistically formidable official program as the attempted total extermination of Europe’s Jews.

The almost-complete lack of documentary evidence for any German extermination plan or program is explained by Raul Hilberg, the father of orthodox holocaust studies, as follows:

“But what began in 1941 was a process of destruction not planned in advance, not organized centrally by any agency. There was no blueprint and there was no budget for destructive measures. They were taken step by step, one step at a time. Thus came about not so much a plan being carried out, but an incredible meeting of minds, a consensus – mind reading by a far-flung bureaucracy.”

No blueprint? No budget? No plan? The perpetrators failed to communicate with each other using official documents, letters, phone calls, or telegrams, but instead organized the genocide of six million people by ESP?!

Since then I have read three more books and many articles on the subject, about evenly split between supporters and opponents of holocaust orthodoxy. I still do not know nearly enough to have a firm opinion about the veracity of the “holy trinity” of the holocaust religion.

But I am convinced that any fair-minded person who takes the trouble to investigate the issue must admit that that the revisionists have a prima facie case that bears investigation.

The holocaust needs to be fearlessly re-opened and re-thought. Challengers to the official version should be encouraged, funded, and turned loose in the archives.

Scholars with the latest archeological equipment should swarm the sites of the alleged death camps looking for the mass graves that have thus far eluded discovery. Chemistry experts should follow in the footsteps of Germar Rudolf and Fred Leuchter and do exhaustive chemical analyses of the camps. Perhaps they will confirm the official version; or perhaps they will disprove it.

But the most important issue is not what happened to a small fraction of the 60 million people killed in World War II. The real issue is whether or not we are free to question history.

Cary Nelson, a professor of English here at the University of Illinois and the President of the American Association of University Professors between 2006 and 2012, originally had accepted an invitation to speak at the Academic Freedom Conference – then backed out due to the inclusion of the holocaust.

It turns out that Professor Nelson wants to destroy the academic career of anyone who questions holocaust orthodoxy. In an article in the Chronicle of Higher Education entitled “Does Academic Freedom Protect Holocaust Deniers?” Nelson wrote: “I would not knowingly hire a Holocaust denier or grant one tenure in a discipline to which the Holocaust is relevant.”

If a student produced a research report like the film below, would he automatically give it an F?

Nelson’s article offers no evidence that he knows anything at all about the historical issues under consideration. His long-winded, badly-written essay blows smoke-rings of pretentious obfuscation while kowtowing mindlessly to the official sacred narrative.

I doubt he would last thirty seconds in a factual debate with a holocaust revisionist like Nick Kollerstrom.

Kollerstrom, a History of Science Ph.D. with chemistry expertise, had his academic career destroyed by people like Cary Nelson. While teaching at University College London, Kollerstrom published a scholarly article arguing that the chemical evidence does not support the existence of mass-execution gas chambers in the German camps.

Shortly thereafter he was summarily fired. No explanation was given. No chance to defend himself was offered. No university official or scholar even tried to critique Kollerstrom’s article or show that there was anything wrong with it. Kollerstrom’s career – like mine – was burned for heresy.

I do not know whether or not Kollerstrom is right about the holocaust. But I do know that he is the victim of a monstrous injustice.

Why are the holocaust, the JFK assassination, and 9/11 surrounded by the same kind of taboo? Anyone who questions the official version of any of these three critically-important historical events becomes the target of mindless insults: “holocaust denier,” conspiracy theorist,” and so on. Why is that?

In all three cases, there is strong prima facie evidence that the official story is questionable. Perhaps that is why the questions are taboo – because we are afraid of the likely answers.

Such is undeniably the case with the JFK assassination and 9/11. I have studied the evidence at some length – I have overflowing bookshelves devoted to both topics – and I would happily stake my life on the fact (not theory) that both crimes were committed by powerful insiders, not the patsies blamed by the official stories.

The Academic Freedom Conference here at the University of Illinois is breaking new ground by taking up these monumentally important historical questions. If the United States of America ever becomes a genuinely free society, and its scholars are finally allowed to ask the hard questions about history, it will be thanks to the efforts of such unsung heroes as Academic Freedom Conference organizer Stephen Francis.