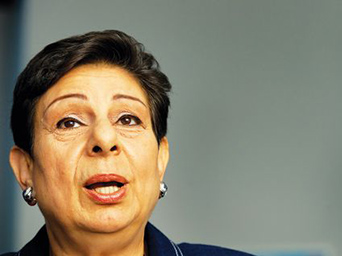 The futile exercise reviving peace talks between Mahmoud Abbas’s half-baked puppet administration and the Israelis comes to its scheduled climax in a few days, after which we wait with bated breath for US Secretary of State John Kerry’s much-trumpeted “framework” for even more lopsided peace talks.

Seven weeks ago, in anticipation of this fateful moment in Palestinian history, I asked Dr Hanan Ashrawi of the Palestine Liberation Organization for an interview and sent her some draft questions.

Dr Ashrawi is a member of the PLO Executive Committee and runs the Department of Culture and Information. A former chair of the Department of English at Birzeit University and highly articulate, she is an experienced and formidable politican. Western activists regard her as a ‘good egg’ and wish they could hear her speak on behalf of Palestinians more often.

I got no reply, and after repeating my request her media assistant asked me make contact again in a few weeks, which I did. That was a fortnight ago.  I have heard nothing, not even an acknowledgement. It’s a familiar story with Palestinian politicians… they treat the media, and even friendly journalists and writers such as myself, with contempt. Then they wonder why they don’t get space or air-time when they want it, and why it is Israel’s narrative that’s broadcast.

It’s hardly surprising that Palestinians never make progress towards freedom – indeed the prospect is more distant than ever – despite having international law and most of world opinion on their side. Losing so heavily, in the circumstances, is a truly remarkable achievement; so remarkable, you wonder if it’s deliberate.

In the eight years I’ve been writing in support of the Palestinian cause I have had no help from Palestinian politicians or their bureaucrats. I find them an uncommunicative ‘awkward squad’ but hoped Dr Ashrawi might be different.

No matter, I’ll set out the questions here. And if ‘good egg’ Dr Ashrawi or any of her PLO colleagues wish to use this opportunity to enthuse campaigners and help sympathisers understand, they are welcome to write in with their answers.

These, I felt, were some of the questions at the front of activists’ minds.

As it happens the rival factions, Hamas and Fatah, have just met to agree preliminary moves to end the division and establish an interim unity government headed by Abbas. The previous unity government, in 2007, was headed by Hamas (who won the 2006 elections)and lasted only 3 months. It was dissolved by Abbas. Whether they’ll do better this time, we’ll have to wait and see, but America and Israel have already objected to Palestinian unity (as if it’s any of their damn business), bleating that Hamas is a terror organization and cannot be involved in government. Does anyone still buy that crapaganda about Israel being the victim of terror when it is clearly the chief perpetrator? Only the zombies in the White House and certain EU capitals.

Spokeswoman for the US State Department, Jen Psaki, said the Palestinian announcement jeopardized the continuation of the fragile peace process, while Israeli prime minister Netanyahu ranted that the unity deal “buried” the peace talks – which he himself had already killed off.

Actually it doesn’t matter what any of them say. There can be no peace without justice, and justice in this case can only be obtained in a court of law.  Failure to recognise this simple truth is plainly perverse.