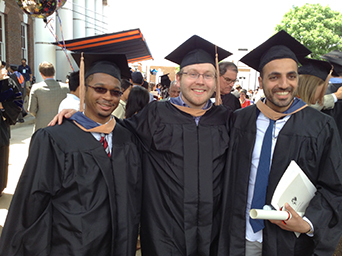 This past Sunday (May 18th) I attended the graduation of my son Jamil from the University of Virginia where he earned his second master (Management of Information Technology), degree from UVA’s McIntire School of Commerce. Jamil finished his Master degree while working full time.

On this very occasion I want to share such great occasion with the tens of thousands of American parents who made all the difference enabling their kids to go to college and graduate. And no doubts scarified so much so that their children can have a better opportunity in life. As parents we all wish for our children than we wish for our self.

I also want to congratulate and celebrate with these graduates. Their perseverance and handwork and “exceptionalism” made it all possible. Since most like my son worked and went to school. America is perhaps one of the very few countries that give such an opportunity for its students. I know many, the majority of students worked very hard to earn that degree. 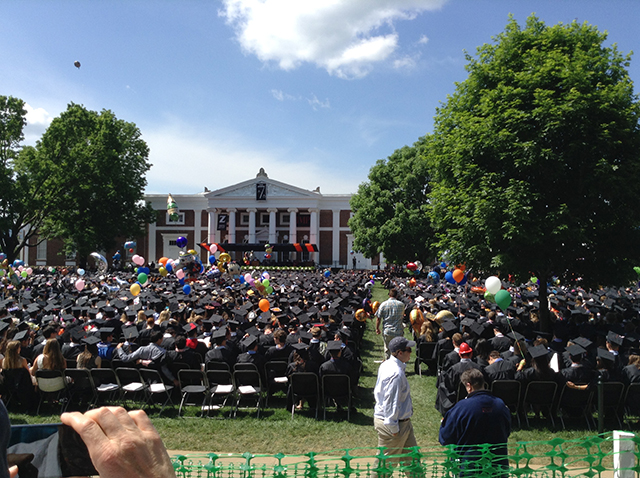 And like myself and son worked throughout college and there is something in that about the young people of America. They work hard, study hard and play hard but then they become active citizens establishing careers and families.

There also the tens of thousands of undergraduate, graduates students who without full scholarship must supplement their hard earned money whether from working part time or contribution from families must seek financial aids and students loans from “shysters and loan sharks” masquerading as legitimate student loans organizations.

Sanctioned by Congress, a Congress that overlooks their deliberate policies of overcharging exuberant rates and in the case of many GI’s deliberate acts of defaulting GI’s on their student loans. A deliberate act of fraud that goes unpunished by our Injustice Department. Watch for this next (too big to fail).

The graduation and commencement exercise at UVA like all across America is a confirmation that yes, there is lots of hopes and resilience in us, the American people. That America and Americans do appreciate and celebrate the hard work that enabled tens of thousands if not millions achieve a better place in life than that of their parents.

Many of us Veterans also enjoyed the benefits of the GI Bill that enabled Veterans like me to attend university benefiting from the $175 a month I used to get as undergraduate at Indiana University augmenting such income working in the steel mills of East Chicago, or driving the Campus bus in Bloomington.

If America did something right for its Veterans it is the GI Bill, perhaps the most prominent of all public laws. The Servicemen’s Readjustment Act of 1944 commonly known as the GI Bill enabled millions to attend college and universities.

However in the days of segregation, many especially, Black Veterans were denied equal access to college education. Returning Black Veterans had the benefits of enrolling in many of the South’s Black colleges and universities. However this was not the case for Black Veterans outside the South. Many universities either practiced segregation or quota and denied admission to Blacks.

Yes, America continues and remains a land of great opportunities especially in education. We are a nation with more than 85.2 % with high school education and some 38.7 % between age 25-64 having college degrees. Not too bad but we can do much better. We are also a nation of the best and most outstanding universities in the world, a Mecca for tens of thousands of international students.

However we are also nation of unequal when it comes to higher education. Blacks represent the lowest percentage to go and finish college with Asian representing the top percentage of any race to attend and finish college, followed by White and one can see that in almost all commencement exercises.

However with all of the great success in education, our educational system remains the most expensive in the world whether colleges and universities are public or private, education is costly with the average 4 years college education running close to $100,000. A substantial sums for any students of families of any means.

During the procession, I was joking with my neighbor Stephen Roberts, a Navy Veteran whose daughter is graduating in Chemistry and I said, Stephen just think, every students who passed us paid some $100,000 to earn his/her degree.

To our amusement, Stephen starts counting, I, 2, 3, 4, 5, 6, 7, 8, 9, 10, one million and kept repeating. By our estimates given the numbers of undergraduates and graduate students, the cost of education for the graduating class of 2014 is around $ one billion.

Imagine if the trillions wasted on our stupid and reckless wars in Iraq and Afghanistan could have been spent on the education of our sons and daughters. Ah well, this is not the time to laments about that

Time for America’s parents and students to celebrate and enjoy. Congratulation America on your families and their children, and congratulation on your new graduate and hopefully new workforce.