Home Life Pope vs. Apartheid Wall: A sign of the times 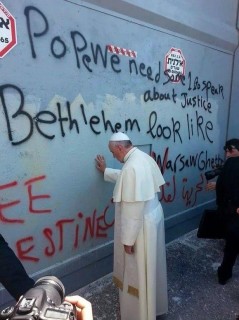 Last Sunday, Pope Francis stunned the world by stopping his motorcade next to Israel’s apartheid wall.

He got out, laid his head on the wall, and prayed. Visible behind him was graffiti reading “Pope, we need someone to speak about justice”, “Free Palestine,” and a comparison of Palestine to the Warsaw ghetto.

The iconic photo of the Pope’s Palestinian prayer went viral around the world. Israeli Prime Minister Netanyahu was furious – but vowed “not to get mad, but to get even.” One wonders what sort of revenge Netanyahu is plotting.

The Pope’s gesture spoke louder than his mostly empty words. He was obviously praying for the apartheid wall to come down. But he cannot say such things directly. The Zionists have more than enough financial and media power (and enough professional killers and dirty tricks experts) to “get even” with any Pope who speaks out against them too forcefully and directly.

The Pope’s historic prayer at the apartheid wall illustrates the rise of religion as a force for social justice. Prior to 1979, social justice struggles were associated with “the left,” meaning socialism or communism. Both movements were dominated by atheists and secularists. They saw religion as a tool of oppression, an “opiate of the people.”

In 1979, two epochal events signaled a sea change in modern history. In Iran, the Islamic Revolution overthrew a corrupt and brutal secularist dictatorship and established a new social model – one that sought social justice through a religiously-based society. And in Poland, the Catholic Solidarity labor movement arose to challenge atheistic Communism. Soon religious Afghans were challenging the atheist Soviet occupation of their country. In 1989, the Berlin Wall came tumbling down…and with it the “Godless Communism” of the Soviet Empire.

Since then, the Islamic awakening has been challenging secular capitalism in many parts of the world. The Catholic Church has begun to take a strong stand against materialistic values. Russia’s President Putin is turning Russia into a pro-religious society – a 180-degree turn from the Communist era of brutal atheist dictatorship. And with his support for Eastern Ukraine and Syria, President Putin is wrecking the New World Order’s plan to wipe out traditional religions and establish a one-world secularist dictatorship.

In Turkey, pro-Islam forces have gradually gained the upper hand over the kemalist atheists, who had conducted one of the worst cultural genocides in world history during their doomed attempt to wipe out Islam. The long struggle of Turkish Muslims to regain their country has also been a struggle for democracy, human rights, and social justice.

The rise of Hezbollah and Hamas, both religiously-based resistance movements against Israeli occupation, is another sign of the times. The Palestinian resistance is no longer led by the secularist PLO, which has become a tame guardian of the status quo. Today the most successful anti-Zionist resistance group is Hezbollah, which defeated Israel in the war of 2006, and which is prepared to inflict an even more stunning defeat on the Zionists should they dare to attack Lebanon again.

Will Putin, the Pope, and the pro-justice Muslims (led by the Islamic Republic of Iran) unite to put an end to Zionism and its dream of a New World Order with a capital in Occupied Jerusalem?

Catholic historian E. Michael Jones foresees such an eventuality. In February 2013, Jones and I were returning to Tehran from a meeting with religious scholars in Qom. Jones, who admires Iran’s God-centered society, expressed the fervent hope that the Pope would come to Iran to make common cause with the Islamic Republic – and turn decisively against Zionism. “But could this Pope (Ratzinger) ever do such a thing?” we asked. “He won’t be Pope forever!” Jones announced.

An hour or so later, regular programming was interrupted by a special bulletin: “Pope Resigns!” It was the first time in 600 years that a Pope had decided to step down. If E. Michael Jones is ever nominated for sainthood, I will happily testify to his miraculous powers of premonition.

The new Pope, Francis, seems blessed with a heartfelt concern for ordinary people. He appears genuinely pained by the suffering of the Palestinians under Israeli oppression. And he seems instinctively opposed to the heartless power of New World Order bankster capitalism.

Will Pope Francis soon be “Going to Tehran”? Will he announce that Netanyahu needs an exorcism, and Zionism needs a funeral? Will he stand with Putin against NATO’s nuclear encirclement of Russia? Will he join the world’s Muslim scholars calling for an end to usury and the destruction of the current international banking system in favor of something more humane and equitable? Will he demand that the US radically scale back its obscene military spending and lead the planet towards demilitarization…and the transfer of trillions of wasted military dollars into schools, hospitals, mass transit, and sustainable energy? Might he call for an end to biological technologies that threaten human dignity and even human existence – such as bio-weapons, designer genes, and trans-humanism?

If the new religious movements for social justice unite – and make common cause with everyone who supports justice, including those who consider themselves secularists – who knows what the future might bring.