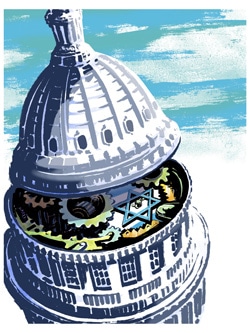 It is amusing to witness the energy and effort mainstream news outlets are investing in diverting attention from the fact that the current mess in Iraq is the direct outcome of Jewish political domination of the West for the last two decades.

When America and Britain launched the criminal second Gulf War, it was the Zionist Neocons, a bunch of politically influential Jews who urged the ‘liberation’ of the Iraqi people. Members of the same breed of tribal exponents have rallied for intervention in Iran, Libya and most recently in Syria.

But Zio-cons were not the only Jewish players in this iniquitous game, they were opposed by a Jewish progressive front largely funded by George Soros and his Open Society Institute. These so called ‘good Jews’ had a different strategy for the Middle East, they planned to ruin the Muslims through the use of Identity Politics by funding Gay, Lesbian, Feminist and Queer groups in the region.

Why do these Jews intervene in Arab and Muslim life? What motivates George Soros and Paul Wolfowitz to ‘revolutionize’ or ‘liberate’ people living thousands of miles away from Manhattan or Washington? Why did Lord Goldsmith give a green light to the war? What drove Jewish Chronicle writer David Aaronovitch to campaign for a series of interventionist criminal wars?  What pushed Lord ‘cash machine’ Levy to the forefront of Blair’s fundraisers?

In 2007, American political science professors James Petras, John Mearsheimer and Stephen Walt reached the conclusion that American foreign policy was dominated by Israel’s lobby.  Surely, Israel’s Lobby is just a polite, politically correct name for the Jewish Lobby. But what motivates the Jewish lobby to destroy Iraq, Libya and Syria? Is it their commitment to the Jewish State?

It didn’t take long for influential Jews to learn that buying a Western politician is much cheaper than buying a tank. When you buy an American or British politician, he often comes with the tank and an army of young soldiers willing to die for Zion.

But George Soros, as a highly sophisticated light Zionist merchant, employed a cheaper method to advance the interests of the tribe in the region and beyond. Instead of buying professional politicians, he invested his money in marginal actors and ID politics. He made the NGO into an effective system of neutralizing potential leaders. He supports ‘very good causes’ that are also extremely good for the Jews.

But here there is a problem – these present day Jewish merchants and stockbrokers, who run AIAPC, LFI, CFI, CRIF and the Open Society Institute excel at selling commodities and stocks. They show talent in inventing false needs that quickly translate into mammon and a lot of it. But they are useless or uninterested in advancing America and Britain’s national interests.  They are devoted to the interests of a single tribe, though they often don’t agree amongst themselves what those interests are.

Although probably unintentionally, the Jewish Lobby often fails to bolster Israel’s long- term interests. The destruction of Iraq, for instance, has made Iran into a regional super power. The failure of the Jewish Lobby to foresee its own role in strengthening Iran is evident. Moreover, it has become clear in the last few days that Iran is uniquely positioned to rescue America from the total mess it was pushed into by the Lobby. Clearly, this is no good news for Israel and the Lobby.

If America and Britain want to remain major powers, each must identify corrosive factors within its own politics, media and finance. They must scrutinize the motives of the Jewish lobby and recognize its dangers. It is time to develop the necessary antidote to deal with this acute political poison.