Home World Dear PLO… Take Your Case To The ICC 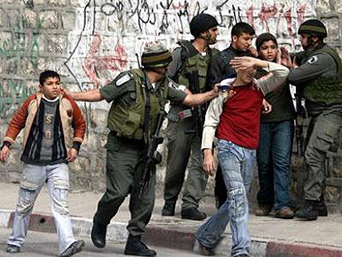 As I write, the Israelis have slaughtered 160 Palestinians in their latest mad-dog military adventure, the vast majority being civilians including 35 children. 934 others have been wounded, including 280 children.

And still the mighty international community shuffles and mumbles.

The Israeli onslaught has brought a flurry of press releases from the Palestinian authorities. One gave detailed prisoner figures highlighting that the huge number of Palestinians arrested in this latest blitz included 12 MPs, bringing the number of Palestinian parliamentarians in Israeli jails to 23.n This shocking statistic shows the lengths to which the regime will go in order to deny Palestinians self-determination and a functioning democracy.

The others were aimed at telling the international community what it should be doing while failing to say what action the Palestinian authorities had taken themselves. For example, PLO (Palestine Liberation Organisation) Executive Committee member Dr. Hanan Ashrawi called on the United Nations Security Council “to uphold its responsibilities in maintaining international peace and security” and to act immediately to stop Israel’s use of excessive force Dr. Ashrawi: “Neither Israel nor its extremist settlers should be granted the license to commit murder and terror” . “Israel must be held accountable for its flagrant violations of international law… We call on all members of the international community to act quickly and stop granting Israel a license to commit murder and terror.”

Dr Ashrawi is surely aware that the UN knows no shame and simply pleading with it to do the right thing is pointless.

But the press release that really irritated came from chief negotiator Saeb Erekat. This was a general whinge addressed to nobody in particular. “We urgently call upon you [who, me?] to intervene and to immediately put an end to the current round of Israeli collective punishment and terror attacks against the people of Palestine. We call upon the international community not to turn a blind eye… and to immediately act…” He reeled off a list of Israeli crimes.

Just a minute, Dr Erekat. A year and a half ago the UN General Assembly upgraded Palestine to a non-member observer state. This enabled Palestinians, at long last, to take part in UN debates and join bodies like the International Criminal Court (ICC).

So what has the Palestinian leadership done with this precious gift of empowerment? Very little as far as one can see.

A year later Erekat was moaning again and demanding action by the rest of the world “to make Israel pay the price for its institutionalized defiance of international law and UN resolutions”. But there was still no sign that he and his bosses — the Palestinian Authority and the PLO – had taken action on their own account, or even started the ball rolling, although they were now equipped to do so.

Dr Erekat’s latest outburst again makes no mention of what the PLO itself has done to bring Israel to book. The peace talks having collapsed Palestinian leaders presumably are no longer bound by their promise to sit still and do nothing. So have legal proceedings been launched in the ICC yet? If they had been, Israel would be behaving with much more restraint. Dr Erekat talks about Israel’s defiance of international law, but why have the Palestinians still not pursued their entitlement to justice through that obvious channel?

Thanks to their infatuation with Israel, the US and Britain reject the Palestinians’ right to go to international law or the UN and insists that all issues must be resolved through negotiations, which of course is ludicrous. The Foundation for Middle East Peace offers useful advice in a recent report that appeared as US-sponsored peace talks were about to collapse http://www.fmep.org/reports/archive/vol-24/vol-24/to-our-readers :

“Palestinians, a subject people, most of whom live under military occupation, are the much weaker party. Israel’s intention to maintain its occupation and settlements, which violate international law, is now obvious. And US diplomacy has failed to bring forth a Palestinian state exclusively through negotiations. Why, then, must Palestinians, and not just as a ‘non-member observer state’ recognized by the UN, forfeit their right to resort peacefully to international law and institutions?

“True, Article IX of the 1993 Oslo Declaration forbade the PLO from internationalizing the conflict. But Article V of the 1995 Oslo Accords said “neither side shall initiate or take any step that will change the status of the West Bank and Gaza.” There were 295,000 settlers in the West Bank and East Jerusalem then. Today there are 560,000. Must the Palestinians waive their rights forever, while Israel continues to abuse these rights unilaterally?”

The latest Palestinian missive to reach me is an urgent plea to the UK government to provide international protection for the Palestinian people from Israel’s criminal onslaught. “We demand the UK government to strongly condemn the Israeli military aggression on Gaza and to intervene immediately to end Israel’s genocide in Gaza Strip and state terrorism throughout occupied Palestine.” Intervene? Britain’s leaders are superglued to the Zionist project and have publicly pledged undying love and loyalty to Israel.

It continues: “We are deeply concerned by the recent statement issued by Minister William Hague, equating the occupied with the occupier and justifying the illegal actions by Israel, the occupying power, against defenceless and unprotected Palestinian civilians.”

Hague is a particular friend and stooge of the criminal Israeli regime, and so is Cameron. Every right-thinking person ought to be concerned.

Ambassador Manuel Hassassian is quoted as saying that Britain “should stand on the right side of justice by bringing an end to the illegal Israeli occupation which is the root cause of the ongoing violence.” Israel continues its use of excessive force with “rampant impunity” and should be reined in by the international community, in particular the High contracting parties to the Fourth Geneva Conventions (which include the UK). The UK government “should not sit idle while Israel continues with its war crimes against the Palestinian people.”

Alas, nothing will change in UK government circles until the electorate dump the likes of Cameron and Hague and exile them to Gaza to live out their lives in a tin-roofed shack while being bombed to hell and back by their vile friends in Tel Aviv.

Pearls of wisdom from our ‘top people’

Now over to our brave peace envoy to the Middle East, that tireless justice seeker Tony Blair Tony Blair: Gaza conflict ‘at very, very critical point . “We are at a very critical point and, in the international community and I think the region, we have got to do everything we can to put in place those short-term changes in the circumstances and then that longer term plan that allows us to create a situation in which the people in Gaza, the West Bank and in Israel feel that this is not then going to recur and that there is some genuine plan in place that’s going to allow this situation to be resolved for the long term security and peace of the people here.”

Say, Mr Blair, have you actually been to Gaza in the seven years since you were appointed to this vitally important job? No? Why is that? Fears for your own safety? What, from Israeli airstrikes?

And with children in the Holy Land continuing to die horribly in large numbers we can’t end without hearing from the British government. Israel-firster William Hague announced today that he had spoken to Palestinian President Mahmoud Abbas and Israeli Foreign Minister Avigdor Lieberman Foreign Secretary calls for ceasefire in Gaza . “I stressed the need for an immediate de-escalation and restoration of the November 2012 ceasefire… I told Minister Lieberman that continuing rocket attacks from Gaza are completely unacceptable. Israel has a right to defend itself against such attacks, but the whole world wanted to see de-escalation.

“It is clear that we need urgent, concerted international action to secure a ceasefire… The current crisis only underlines the need for a fundamental transformation of the situation in Gaza, including the restoration of Palestinian Authority control, the opening up of legitimate movement and access and a permanent end to the unacceptable threat of rocket attacks and other forms of violence from Gaza against Israel… Both sides should take the necessary steps towards a lasting peace and to address the underlying causes of the conflict and instability in Gaza.”

So… no condemnation and still no consequences for Israel’s murderous aggression. Hague twice mentions rockets from Gaza but is silent on all those missiles, bombs, tank shells, etc, from Israel raining down on Gazans who have nowhere to run. He hastens to say Israel has a right to defend itself but daren’t mention that Palestinians have that same right.

And how clever to put the burden of addressing the “underlying causes”on the Palestinian leadership when the instability throughout the Holy Land – not just Gaza – is down to Britain and France nearly a century ago and later compounded by the US and the Zionist movement’s hoodlums.

Say, Mr Hague, in all the years you were shadow foreign secretary and then the real thing have you ever been to Gaza? No? Why is that? You mustn’t talk to Hamas because it’s a terror organisation? I thought only their military wing – the Izz al-Din al-Qassem brigades – were proscribed, not Hamas’s political wing. It says so in this Home Office document Proscribed
Terrorist Organisations.pdf .

So what’s the excuse now for not visiting and talking? Oh I see… it might upset your bosom-buddies Bibi, Avigdor and the adorable Tzipi.