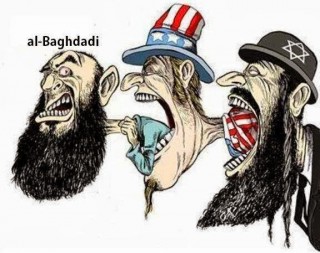 The largely unknown leader of the Takfiri terrorist group ISIL has declared himself “caliph” of Islam and rightful ruler of the world’s nearly two billion Muslims.

Al-Baghdadi’s declaration was met with a barrage of ridicule. Observers pointed out that al-Baghdadi declared himself Caliph while wearing a Rolex wristwatch – a symbol of enslavement to Western materialist consumer culture.

Even Assem Barqawi, the spokesperson for the al-Qaeda-affiliated al-Nusra Front – an erstwhile ally of ISIL in the Syrian war – spurned al-Baghdadi’s claim, and ripped ISIL for its brutality.

In short, al-Baghdadi and ISIL have no support whatsoever among Muslims. They are loathed even by their fellow ultra-Salafis, Wahhabis and Takfiris. 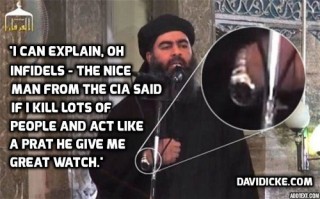 Yet the self-proclaimed “caliph” and his roughly 2000 ISIL followers have been relentlessly promoted by the Zionist-dominated Western media and terror-industry think tanks. For example, terror expert William McCants of the Brookings Institution told the New York Times: “ISIS is now officially the biggest and baddest global jihadi group on the planet… Nothing says ‘hard-core’ like being cast out by Al Qaeda.”

“The lessons of history itself should compel us to take Abu Bakr al-Baghdadi’s promise to wage a ferocious worldwide war of vengeance against those he sees as the enemies of God with the utmost seriousness. His sermon in Mosul may very well mark the opening shots of the Third World War…”

Worse yet, al-Baghdadi and ISIL are not just being hyped – they are also being armed, trained, and dressed in identical black Teenage Mutant Ninja Turtles uniforms. The money is coming from US taxpayers, CIA drug-money slush funds, and CIA-asset Persian Gulf oil sheikhs.

Why are the CIA and the Zionists supporting ISIL and promoting al-Baghdadi’s fake caliphate? And why does Israel provide support and medical treatment to ISIL terrorists in Syria?

This paradoxical situation – a self-proclaimed “caliph of Islam” who has no support among Muslims, but massive support from Zionists and imperialists – points to an ineluctable conclusion: ISIL is a manufactured fake-opposition group.

So who manufactured ISIL – and how?

Circumstantial evidence suggests that al-Baghdadi may have been mind-controlled while held prisoner by the US military in Iraq. The American and Zionist authorities are scrambling to hide the fact that al-Baghdadi spent more than five years in US custody. Why would they engage in such a cover-up unless they had something big to hide?

Wikipedia, a tool of the Zionist wing of the CIA, is peddling the following falsehood:

“According to US Department of Defense records, al-Baghdadi was held at Camp Bucca as a ‘civilian internee’ by US Forces-Iraq from early February 2004 until early December 2004, when he was released. A Combined Review and Release Board recommended an ‘unconditional release’ of al-Baghdadi and there is no record of him being held at any other time.”

This may not be an outright lie. There may indeed be “no record” of the fact that al-Baghdadi was held and treated by a secret CIA mind-control unit at Camp Bucca from 2004 until 2009. The records of such a “fabricate a fake ‘radical Muslim’ leader through mind control” operation would undoubtedly be destroyed or concealed behind a high-level National Security classification.

But is such a thing really possible? Sadly, yes. CIA mind control technology has made tremendous strides since it began in the 1950s with the lavishly-funded MK Ultra program. MK Ultra was closed around 1960 because it had achieved its objective: Power over the human mind such that a brainwashed “Manchurian candidate” assassin could be created. That is, an ordinary human being, after CIA treatment, could be made to kill someone – anyone – without the slightest conscious awareness of his actions. The most notorious “Manchurian candidate” is Sirhan Sirhan, the mind-control slave who was set up as a patsy in the CIA’s murder of Robert F. Kennedy in 1968.

The CIA also has a track record of creating cults – and their charismatic leaders. The Reverend Jim Jones, an anti-establishment clergyman, was turned by CIA mind-control into a fire-breathing, charismatic puppet-master, who convinced hundreds of people to join him in a mass suicide. Ironically, the puppet-master was himself a CIA puppet; the mass suicide was a CIA experiment designed to discover whether a large group of political dissidents could be so totally controlled that they would kill themselves on command. This experiment, like the murder of RFK, was a success.

More recently, the CIA has been conducting Nazi-style mind-control experiments on Muslim inmates in Guantanamo and other terror prisons. Jon Ronson – a mainstream journalist and bestselling author who generally keeps his humorous distance from “conspiracy theories” – discovered in 2003 that Guantanamo inmate Jamal al-Harith and others had been subjected to torture and “silent sound” mind-control experiments while in US custody.

In her book The Shock Doctrine, Naomi Klein shows that CIA torture is not designed to elicit information. Its real purpose is to “break” the subject so he or she can be mind-controlled.

Douglas Rushkoff’s book Coercion explains how CIA mind control works: The subject is “broken,” then the CIA interrogator presents himself as a substitute parent figure and seizes total control of the subject’s mind. That is how Khalid Sheikh Mohammed, who was waterboarded 183 times in a single month, was convinced by his mind-control torturers that he was involved in the 9/11 attacks.

The secrecy surrounding al-Baghdadi’s five years in US custody strongly suggests that the self-proclaimed “caliph of Islam” is actually a Muslim version of Jim Jones. His “Islamic State” is a Muslim Jonestown. It is designed to mass-suicide Islam by turning Muslims against each other.

Fortunately, the world’s Muslims are not drinking the kool aid.