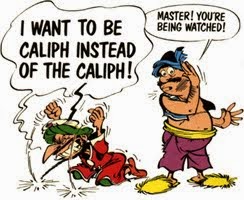 Just when you thought synthetic terrorism couldn’t get any goofier, a new takfiri terror group calling itself OSIRIS (Organization of Silly Islamic Radical Idiot Savants) has declared a new caliphate.

Caliph Ubu Bakr al-Bulldoody of OSIRIS explained: “We really like the idea of naming fake jihadi groups after pagan gods and goddesses. So why stop with ISIS? The more caliphates, the merrier.”

Al-Bulldoody (“call me Ubu”) explained that he is entitled to rule over the world’s two billion Muslims, and wage jihad against the 1,999,999,999 of them who are deviants and infidels, due to his possession of a gold-plated Dick Tracy radio wristwatch that a nice CIA man gave him. “This really cool wristwatch signifies my indisputable authority over the entire House of Islam, and its garage and garden shed too,” Bulldoody asserted. “It also gives me the right to make chopped liver paté out of any Muslim who rejects my authority and disputes my interpretation of scripture.”

But is human liver paté halaal? Al-Bulldoody answers in the affirmative: “Every finger-licking morsel of human liver paté ingested by anyone connected with OSIRIS comes with a seal of approval attesting to the fact that it has been blessed by a rabbi.”

But is there room for two Caliphates? Bulldoody insists that OSIRIS and ISIS will be able to work things out.

“Isis and Osiris is a love story, right? It’s about an incestuous couple who get along really, really well. In fact, Isis loves Osiris so much that she follows him everywhere and brings him back from the dead. I’m sure the guys over at ISIS will love me at least that much.”

Bulldoody has written to President Obama asking for another $5 billion of American taxpayers’ money to finance his caliphate-establishing jihad, and to repair his gold-plated Dick Tracy Radio Wristwatch in case it breaks down. Obama is said to favor asking Congress for the money, on condition that al-Bulldoody sincerely promises to be a good terrorist and not a bad terrorist.

Not everyone is sold on OSIRIS. “At the end of the Isis and Osiris story, Osiris winds up ruling in the underworld – that is, in hell,” said a Muslim who wishes to remain anonymous in order to keep his head on his shoulders and his liver in his belly where it belongs. “That’s where these guys are going to wind up with their so-called Caliphates.”