Will the 13th anniversary of 9/11 be the unlucky one – for the perpetrators?

Though the floodwall holding back the truth has not yet broken, it has sprung a large and growing number of leaks. All over America, indications of disbelief in the official “19 hijackers” myth are puncturing the lamestream liars’ attempts to construct an illusion of unanimous acceptance of their unholy sacred narrative.

In New York, a gigantic 45 foot by 45 foot two-sided billboard in Times Square is showing the 6.5 second controlled demolition of World Trade Center Building 7 – and shoving it in the face of the cover-up criminals at the New York Times.

The billboard is part of a campaign to raise awareness of WTC-7, the achilles heel in the official story of 9/11. Spearheading that campaign is the High Rise Safety Initiative, which succeeded this week in forcing the mobbed-up New York city government to back off on its attempts to keep the initiative off the ballot by claiming that not enough signatures had been submitted. 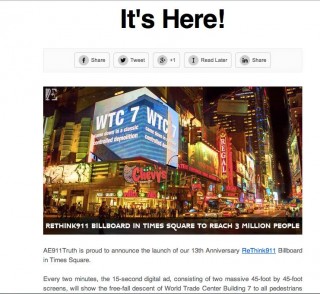 The High Rise Safety Initiative would force a new investigation of the destruction of WTC-7…on the grounds that if a 47 story building can “just fall down” in six seconds from modest office fires, every high rise in New York is a hazard to life and limb. Experts believe they can now prove beyond any doubt that NIST’s “just fell down from office fires” cover story is a deliberate and preposterous lie…and that the ultra-high-security CIA-inhabited WTC-7 was taken down by controlled demolition.

New York is witnessing pro-9/11-truth street demonstrations and other actions, including film screenings as well as the debut of an off-Broadway play entitled This Is Not About 9/11 by Sarah Van Auken, daughter of Jersey Girl Lorie Van Auken, who did yeoman’s work in the early days of fighting the 9/11 cover-up.

Washington DC is also hosting several 9/11 truth events, including presentations on the anthrax component of the 9/11-anthrax false flag by Barry Kissin, raising some of issues highlighted in professor Graeme MacQueen’s new book The 2001 Anthrax Deception. 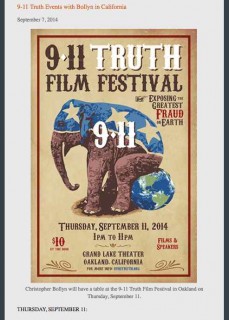 On America’s left coast, the 9/11 Truth Film Festival in Oakland, California (which is being live-streamed by NoLiesRadio) will be the site of 9/11 author-journalist Christopher Bollyn’s “back in the USA” coming-out party. Bollyn has a table at the event and will be signing books and talking with festival goers. He also has events lined up in Los Angeles and San Diego this weekend.

9/11 truth also leaked onto the editorial page of the mainstream newspaper the Greenville, NC Daily Reflector. As the author of the first three 9/11 truth op-eds ever published by any US mainstream daily (the Capital Times of Madison, WI, which was closed down and turned into a free weekly by their parent company a year later) I am always happy to see truth miraculously appearing on a mainstream editorial page. 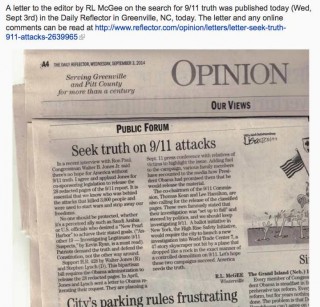 9/11 truth also infiltrated The Daily Kos, a CIA-Zionist left-gatekeeper rag that explicitly prohibits discussion of any non-mainstream version of 9/11. A clever woman named Katherine Smith published a facetious piece entitled “9/11 Truthers are Dummies” which parodies the usual moronic attack pieces of untruthers and disinfo artists. (She explains her real views of 9/11, which she is not allowed to publish at Daily Kos, here.)

Perhaps the most audacious 9/11 truther penetration of a hostile institution this anniversary was Barbara Honegger’s newly-released video 9/11 Museum Virtual Walking Tour. The 9/11 Museum, a shrine to the genocidal Big Lie, actually includes all sorts of exhibits relevant to the reality that 9/11 was an inside job. Thanks to this video, you don’t have to go to New York to get the truthful version of what’s in the 9/11 museum.

9/11 truth will be penetrating another potentially hostile environment this Saturday: the annual left activist event Fighting Bob Fest in Baraboo, Wisconsin. While at least half of the attendees are sympathetic to 9/11 truth, the organizers of Fighting Bob Fest (some of whom privately admit they know 9/11 was an inside job) refuse to schedule any openly pro-truth speakers. Additionally, Wisconsin’s biggest anti-9/11-truth fanatic, a Labor Zionist communist named Allen Ruff, has been known to punch out anyone with the audacity to wear an “Israel Did 9/11” T-shirt. (This happened at Fighting Bob Fest 2009.)

Speaking of penetrating hostile environments, 9/11 truth is spreading surreptitiously through America’s colleges and universities. I know a significant number of professors who are tea

ching the evidence that 9/11 was an inside job, and in some cases even designing entire courses around the false flag interpretation of 9/11. Adnan Zuberi’s award-winning new film 9/11 in the Academic Community examines the way universities seek – or avoid – the painful truth.

The only two countries on earth where 9/11 truth is openly supported by mainstream institutions are Iran and Malaysia. (No wonder Israel wants to attack Iran, and appears to have been involved in the destruction of two Malaysian airliners.) Later this month a group of leading 9/11 truth advocates will be attending the New Horizon Resistance Conference in Tehran. The group of 9/11 truth seekers in Tehran will include Globalization Studies professor Anthony Hall, We Are Change founder Luke Rudkowski, “Operation Terror” director Art Olivier, former NSA officer and whistleblowing journalist Wayne Madsen, and yours truly.

Press TV, “the Iranian CNN,” is also helping spark 9/11 truth by publishing such articles as:

Arrest Kissinger for Both 9/11s (my new one)

Neocons confess: We did 9/11 anthrax! (most-read 9/11 truth article of this anniversary)

In a sense, the biggest “9/11 truth leak” this anniversary is the wave of over-the-top neocon propaganda hyping the alleged Islamic terror threat in ludicrously unrealistic fashion. The September criminals are obviously signaling their desperation – and their guilt – by hyping such stories as the “11 Libyan jetliners set to attack US on 9/11” and the “ISIS to invade US from Mexico.”

Another big leak: The effort to declassify the 28 missing top-secret pages of the Joint Congressional Inquiry 9/11 report has been drawing attention from the mainstream as well as the alternative media. Is this a “Blame the Saudis, Protect the Israelis” limited hangout? Maybe we’ll find out before the next anniversary.

Finally, no discussion of recent 9/11 truth leaks would be complete without mentioning the classified 2003 International Atomic Energy Agency report documenting the use of miniature nuclear weapons in the 9/11 demolitions. According to VT Senior Editor Gordon Duff, angry IAEA personnel are finally pushing this story out, in part because they have been authorized, or a least tolerated, in doing so by senior members of the military and/or administration. VT sources report that new-generation miniature fusion weapons have been used in a series of false flag events during the past two decades, including 9/11; an international organized crime ring with close ties to Israel is the leading suspect. Stay tuned to this publication for updates on this developing story.

So there you have it – this year’s top 9/11 anniversary news, as reported this morning on False Flag Weekly News.

I look forward to coming back here next year for a report on even bigger 9/11 truth leaks, maybe even a “case solved, criminals jailed and/or executed” game changer.