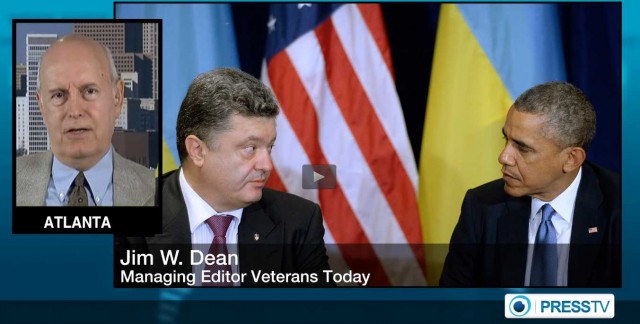 [ Note: Poroshenko is the dirtbag who agreed at the four-party talks in Geneva to begin a political dialog, and then went home and kicked off his attack on East Ukraine. And when the first one stalled he finally agreed to a truce and formal meeting, during which he used the time to regroup and prepare another bigger assault. He did this with the full backing of the US and the EU. This guy is what you scrape off the bottom of your boot if you work in the stockyards.]

US President Barack Obama’s Thursday meeting with his Ukrainian counterpart in the Oval Office is a “big push” to rebuild their “diplomatic image” tarnished over the Ukraine crisis, says an analyst.

Petro Poroshenko will address a rare joint session of Congress after meeting with Obama at the White House. The Ukrainian leader is seeking more robust US aid to help his military battle pro-Russia forces fighting for control of eastern regions along the border with Russia.

Poroshenko’s visit to the US is designed as a symbolic show of support for the Ukrainian leader, said Jim W. Dean, managing editor at VT. “They bring him over here, make a big hero, saying we’re going to support you.”

The US and its Western allies have repeatedly accused Moscow of destabilizing Ukraine by supplying arms to the pro-Russian forces operating in the eastern part of the country.

They have imposed a series of economic sanctions on Russia and also restricted President Vladimir Putin’s involvement in some international organizations.

White House officials made clear that Poroshenko’s visit was aimed at sending a message to Russia about the West’s support for Ukraine.

“The picture of President Poroshenko sitting in the Oval Office will be worth at least a thousand words — both in English and Russian,” White House spokesman Josh Earnest said.

Dean told Press TV that, “The US is huffing and puffing, playing the big bad bear, but Russia’s diplomatic reputation, particularly Putin and Lavrov, is basically in the stratosphere here.”

Putin and his Foreign Minister Sergey Lavrov, the analyst noted, “have never gone for any of the feints that the US has tried to do to make them look like aggressors. NATO basically has had to put out one silly lie after another about the Russians invading Ukraine,” Dean said.

“So I think they just feel they need a big push to try to get control over the diplomatic image,” he said, referring to Obama’s meeting with Poroshenko