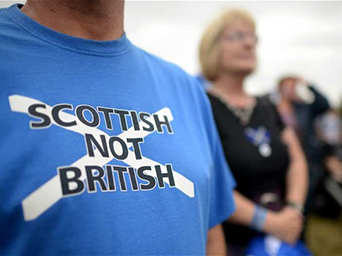 Wallace and the Bruce left spinning in their graves

As voting day neared, the “Yes” to Independence campaign was seriously threatening the unity of the realm by arguing that the only guarantee of self-governing powers for Scotland was to vote for independence. Successive polls showed the matter was too close to call.

In a panicky move just 3 days before the Referendum the main party leaders in Westminster published a pledge on the front page of the Daily Record, a high-circulation Scottish tabloid based in Glasgow, in a last-throw bid to persuade Scots to vote ‘No’.

This “vow” was signed by David Cameron, Ed Miliband and Nick Clegg.

It promised “extensive new powers” for the Scottish Parliament delivered by a process starting immediately, i.e. today, and “opportunity and security for all by sharing our resources equitably”. The trio “categorically” promised that Scotland would have the final say on funding for the National Health Service, and the Barnett allocation for resources would continue.

The Barnett formula, devised 40 years ago as a temporary fix, is a method for determining the distribution of public spending to the various regions of the UK in proportion to their population.

“We are agreed that: The Scottish Parliament is permanent and extensive new powers for the Parliament will be delivered by the process and to the timetable agreed and announced by our three parties, starting on 19th September.

“And it is our hope that the people of Scotland will be engaged directly as each party works to improve the way we are governed in the UK in the years ahead.

“We agree that the UK exists to ensure opportunity and security for all by sharing our resources equitably across all four nations to secure the defence, prosperity and welfare of every citizen.

“We believe that the arguments that so powerfully make the case for staying together in the UK should underpin our future as a country. We will honour those principles and values not only before the referendum but after.

“People want to see change. A ‘No’ vote will deliver faster, safer and better change than separation.”

Did the sweetener work?

In the end the Scots voted 55% to 45% to stay in the Union. But what do those vague promises of better things to come actually mean? The wording is cleverly crafted to leave plenty of wriggle-room. Besides, the three signatories might not be in leadership positions this time next year (a general election intervening). So how will they be held to their promise? Will English and Welsh MPs who want the same devolved powers feel bound by the trio’s pledge just to Scotland?

Cameron has just issued a bulletin: “We have heard the voice of Scotland – and now the millions of voices of England must not go ignored.

“So, just as Scotland will vote separately in the Scottish Parliament on their issues of tax, spending and welfare, so too England, as well as Wales and Northern Ireland, should be able to vote on these issues – and all this must take place in tandem with, and at the same pace as, the settlement for Scotland.”

He’s saying that nothing will happen for Scotland unless it happens for England, Wales and Northern Ireland simultaneously. But such extensive constitutional changes could take years to achieve. In the meantime would a grumpy British Parliament agree to enhanced powers for Scotland only, as per the Cameron-Clegg-Miliband deal, assuming anyone can work out what it actually means?

So was the pledge worth the parchment it was written on? Indeed, was the ballot rigged? (see this video http://www.youtube.com/watch?v=LbJif7vISQg&app=desktop now doing the rounds). Anyway, the powers-that-be would never allow the United Kingdom to break up… just like that. All and any steps would be taken to prevent it.

My guess is that any change will be illusory; the status quo will be maintained. A second referendum – with no last-minute ambush or other hokey-pokey – will be needed.

Those legendary freedom-fighters William Wallace and Robert the Bruce, who achieved true Scottish independence through a long campaign of broken heads and hacked limbs in the 14th century, must be spinning in their graves at Scotland’s comfy capitulation in the 21st.