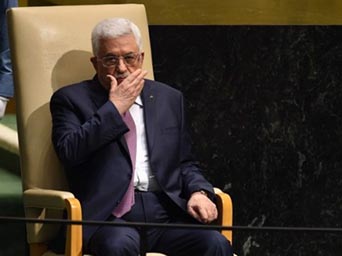 Ever since I began taking an interest in the Palestinians’ struggle – nearly ten years ago – those brave people have been cursed with rubbish leadership that has taken them steadily backwards instead of forwards… leadership that studiously ignores Palestine’s friends outside, fails its people inside and allows its territory and resources to dwindle.

Western Christendom is afflicted with similar misfortune. Corrupted leaders don’t lift a finger to stop the Holy Land, which is central to the beliefs of most of their people, from being smashed, grabbed and bloodied.

Now the Palestinians are huddled in the Last Chance Saloon drinking bad whisky and polluted sarsaparilla while Zio-cowboys shoot up the town, carpetbaggers lurk in the shadows and the marshal and his deputies cower in the jail. The cavalry’s nowhere to be seen.

There are several versions of the speech made by the town marshal, alias Mahmoud Abbas, the date-expired President of Palestine, to the United Nations General Assembly. He may or may not have said any or all of the following…

He is said to have ended by submitting an application for full UN membership for Palestine on pre-June 1967 borders and with Jerusalem as capital.

Has Marshal Abbas, whose day job is acting as Israel’s enforcer in the Palestinian territories, suddenly turned on his handlers and rebelled against the evil occupation? One might think so…. except that he’s saying both ‘yes’ and ‘no’ to more spointless negotiations, and a definite ‘no’ to any “unilateral steps” — meaning, I assume, that he still won’t take the case of Palestinians’ rights and the war crimes committed by Israel to the International Criminal Court (ICC). The message he sends is as confused as ever.

Turning to the ICC became a key option for Abbas in 2012 when the UN General Assembly recognized “Palestine” in the West Bank, Gaza and East Jerusalem as a non-member observer state. This upgrade opened the way to requesting the ICC’s jurisdiction in Palestine. He still hasn’t done that.

On 25 July this year the Palestinian Authority’s Justice Minister Saleem al-Saqqa and General Prosecutor Ismail Jabr submitted a letter to the ICC requesting an investigation. Unfortunately, only a head of government, head of state, or foreign minister has the authority to grant the ICC jurisdiction for an investigation. ICC Prosecutor Fatou Bensouda said she “did not receive a positive confirmation” that the documents accepting ICC jurisdiction were on behalf of the PA/PLO’s top cats (i.e. Abbas and his senior deputies), the only figures who could authorize an investigation. “Accordingly, there is no legal basis for my Office to consider and/or treat the 30 July 2014 communication as emanating from a representative of Palestine endowed with the required full powers to seize the Court’s jurisdiction…”

In early August, Riad Malki, the PA foreign minister, met with ICC officials in the Hague, and said Palestinians should do everything in their power to enable the ICC to investigate. But on 29 August Bensouda wrote in the Guardian that the Palestinians had still not granted the ICC jurisdiction to investigate alleged war crimes in its territory. Also, in August, Hamas were reported to have agreed to back an application to the ICC even if it led to themselves being investigated for indiscriminate rocket fire against Israel. They said they weren’t concerned about that. “We are under occupation, under daily attack and our fighters are defending their people… It is well known that Israel initiated this war and previous wars.”

For two years Marshal Abbas, who should have handed in his tin star when his official term as President ended in 2009, has dragged his feet over going to the ICC, a move that could transform the Palestinians’ relations with their chief tormentors, Israel and the United States. Had he acted like he meant business, the latest slaughter in Gaza would probably not have happened. It is futile to repeatedly demand that the UN and the international community intervene to end the occupation and the war crimes when he has not used the tools available to him.

The way is clear for Abbas to pursue a solution based on justice instead of engaging yet again in a lopsided political fudge concocted by some of the most dishonest fixers on the planet masquerading as ‘peace brokers’.

In the meantime extracting meaningful information from the PLO [Palestine Liberation Organisation, the sole representative of the Palestinian people to the outside world] and the Palestinian Authority is like squeezing blood from a stone. In August, during the bickering about the Gaza ceasefire terms, I put this question to the PLO’s media officer, to Dr Hanan Ashrawi (PLO executive member and darling of the pro-Palestinian movement), and to the Palestinian embassy in London:

The Agreement, drawn up by the US and sponsored by the Quartet, was launched by Condoleezza Rice (US Secretary of State) and Javier Solana (EU High Representative) in Jerusalem on 15 November 2005. http://unispal.un.org/UNISPAL.NSF/0/C73B42AA9C864783852570BA0064EF7E

Having thrashed it out before, shouldn’t all sides be focused on this right now as a minimum?

Also, when does the leadership intend to accede to the Rome Statute [i.e. engage with the ICC] given the urgency of the situation?

The 2005 Agreement, if readers remember, promised the Palestinians, among other things, freedom of movement of people and goods, their own seaport and airport, and control over entry and exit.

In spite of reminders I received no reply from any of these official sources. The familiar silent routine, and their desire to be as unhelpful as possible, was maintained.

Then in July I quizzed the PLO about a curious item by Fox News which reproduced correspondence from Abbas to UN secretary-general Ban Ki-Moon pleading for “international protection” for the Palestinian people
http://www.foxnews.com/world/interactive/2014/07/25/letter-from-secretary-general-addressed-to-president-security-council/ .

Was the correspondence genuine? If so, what was the PLO saying about the request by Mr Abbas, received by Ban Ki-Moon on 13 July, to make Palestine a UN Protectorate? The dates would suggest that Security Council members had been aware of his approach while the savagery in Gaza continued. Ban Ki-Moon had seemed very relaxed about it, waiting a week before taking action, so did Abbas follow up as a matter of urgency?

Assuming the UN letter wasn’t a hoax, why was Abbas’s application for protection not broadcast through all mainstream channels? Did the people of Gaza know about it as they continued to be butchered 24/7 in increasingly large numbers?

A reply from a PLO media person simply said: “I’m overloaded with work. I can confirm that this letter was sent and published in local newspapers. It doesn’t mean that we have requested Palestine to become a UN protectorate, but simply to be protected as per international law.”

Published in local newspapers? Is that the feeble limit of the PLO’s efforts to inform the world?

When can deep-suffering Palestinians expect the requested “protection” to actually arrive… as per international law?

The words “unity government” are on everyone’s lips. But is it really a good idea for Palestinians to unite under the likes of Abbas and his cockeyed, lazy PLO? Where are the alternative leaders hiding?

Please don’t tell us there aren’t any.