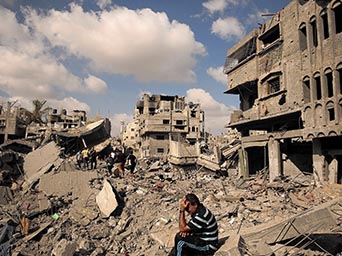 Now that all the guns fell silent, perhaps temporarily, the Palestinian Authority government of Dr. Hamdallah and his entire cabinet are meeting in Gaza with the mission to rebuild Gaza.

In all previous criminal wars against Gaza, Israel was the biggest perhaps the sole beneficiary of the reconstruction of Gaza, securing for its building suppliers, contracts worth hundreds of millions as a reward for what its army did in destroying Gaza. As it happened in previous wars, Israel destroys only to have its suppliers and contractors take the lion shares.

When Palestinian Prime Minister Hamdallah met with Israeli officials few weeks to discuss the reconstruction of Gaza, it was not sure what was agreed to and what role and benefits Israeli construction and building material companies will benefits from such reconstruction.

With Gaza remaining under siege from the Israeli side and with almost total siege from the Egyptian side, and with Israel having a total and absolute say over what and when such reconstruction start, or what supplies are allowed, it is very likely that Israeli suppliers will be the primary beneficiaries. The international community and the UN should resist that and stand firm.

Well, that should not and must not be the case. Those responsible for the destruction and mayhem of Gaza should not be the financial beneficiaries of the rebuilding of Gaza even if the US stands behind and support Israel on such issues. 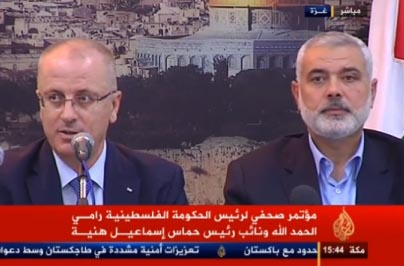 In fact the US and Israel should be the ones paying for the entire costs of reconstruction and rebuilding of Gaza, since both countries are solely responsible for the massive destruction witnessed during the last war on Gaza. The US as the prime financials and political sponsor and main armed supplier of Israel’s continuous wars on Gaza. Germany, England and France as main armed suppliers of Israel should also contribute to the reconstruction. Those who destroy and kill and murder must be the one that pays the price. Israel must not be rewarded for its deliberate crimes.

Israel always has a deliberate practice of targeting civilian infrastructure as a way to punish civilians and inflict maximum damage. This was always the case in Israel’s war on Lebanon when it targeted bridges, roads, power stations, schools, airports and hospitals, even communication towers.

The case of Gaza is no different. Israel and as usual targeted all key civilian infrastructure in Gaza including the sole power station, sewage and water treatment plants, roads, schools, hospitals, supply depot and of course entire neighborhood and building blocks. In fact Israel destroyed over 25,000 homes and buildings rendering more than 500,000 homeless.

The Palestinian Authority and the world donors including Arab donors must not reward Israel for its criminal act and must push for all materials and supplies to come from outside Israel even Egypt, through setting a supply depot in Cyprus to receive all reconstruction material from international suppliers.

Every one knows that certain influential individuals within the Palestinians Authority have a monopoly over any construction projects, small or large with key relatives being awarded feasibility studies, engineering studies, supplies, even actual construction. Open, fair and transparent bidding and awarding of contracts is not known or practiced in the Palestinian Authority controlled areas. That explains why wealth is concentrated within a small circle of people all of whom are within the inner circle of the PLO and Palestinian Authority.

To ensure transparency and accountability, there is a need to set up an international commission to be in charge of the reconstruction of Gaza. A commission that handles all the studies qualifies companies and suppliers, set up the depot in Cyprus with project managers on site in Gaza. Lebanese, French and English consulting companies are notorious for their corruption practices in the Gulf. I should know that having worked in the Gulf in the construction industry.

Given the shameful history of both the US State and Defense departments in awarding tens of billions of rebuilding contracts in Iraq and Afghanistan, I would think it would be a big mistake if the same group of companies that were the primary beneficiaries of these projects were part of the rebuilding of Gaza. The corruption and mismanagement of rebuilding Iraq and Afghanistan is legendary and can only be matched by corrupt countries in Africa and the Middle East.

Palestinian officials and their families should meet a much higher threshold standards, not only in qualifying as suppliers and contractors but in awarding such supplies and contracts, given the solid and shameful history of corruption within the PLO and Palestinian Authority.