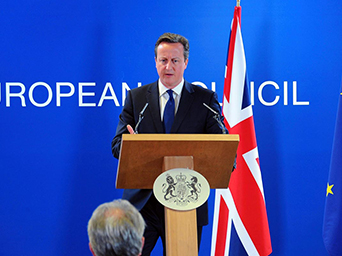 Agent Cameron still hasn’t got the message on Palestine

Last Monday the House of Commons voted emphatically to “recognise the state of Palestine alongside the state of Israel as a contribution to securing a negotiated two state solution.” So decisively, that the motion was carried by 274 to 12.

MP Grahame Morris, who tabled the motion, said afterwards: “I want to impress on the Minister… the need to reflect on the debate. The will of Parliament has spoken tonight. It is the right thing to do to recognise Palestine and I hope that he will go away and implement the motion.”

When it came to the point more than half the nation’s MPs ran for cover and went missing rather than be seen voting one way or the other and risking a backlash from justice seekers on the one side or pro-Israel bully-boys on the other. One MP, George Galloway, declined to vote saying he couldn’t support the motion “as it accepts recognition of the state of Israel, does not define borders of either state or address the central question of the right of return of the millions of Palestinians who have been forced to live outside Palestine” http://english.pnn.ps/index.php/politics/8349-british-mp-george-galloway-abstained-from-palestinian-state-vote-as-it-accepts-recognition-of-israel .

Many will agree with Galloway, but the sad fact is that the British Government recognised Israel long ago, without regard to the rights of the Palestinians, so it’s now a question of establishing parity while the Government continues to promote its fantasy of a two-state solution.

Only two days after the resounding Commons vote Baroness Warsi stood up in the House of Lords to ask what the Government’s position was on the recognition of Palestine as a state.

Baroness Anelay, for the Government, replied: “We will recognise a Palestinian state at a time of our choosing, when we think it can best bring about peace. A negotiated end to the occupation is the best way to meet Palestinian aspirations on the ground.”

How uncanny. Her answer was almost word for word identical to what Tobias Ellwood (Parliamentary Under-Secretary of State for Foreign and Commonwealth Affairs) had told the House of Commons 48 hours earlier… “The UK will bilaterally recognise a Palestinian state when we judge that that can best help bring about peace… because a negotiated end to the occupation is the most effective way for Palestinian aspirations of statehood to be met on the ground.” It showed, if nothing else, how superbly trained ministers are in not straying from the carefully scripted mantras orchestrated by Tel Aviv.

A few weeks ago Sayeeda Warsi resigned her position as Senior Minister of State for Foreign and Commonwealth Affairs saying the British Government could only play a constructive role in solving the Middle East crisis if it is an honest broker “and at the moment I do not think it is…. Our position not to recognise Palestinian statehood at the UN in November 2012 placed us on the wrong side of history and is something I deeply regret not speaking out against at the time.”

She now pressed Anelay, her replacement: “Could the Minister detail the specific conditions or criteria that would need to be met for this Government to recognise the state of Palestine? What is the Government’s response to the overwhelming vote for recognition that we saw in the House of Commons on Monday?”

Baroness Anelay, yet another unelected Conservative Party apparatchik, replied: “The issue is and will remain a foreign policy priority for the UK, but, as I said, we need to judge when it is right to take that decision. What we need to do is to find a negotiated end to the occupation. That is the most effective way of proceeding. My noble friend asked about criteria. Clearly, you judge criteria on a fluid system. You watch, you wait and you encourage the Middle East process to continue—and one does not give up.”

Lord Alderdice: “Do Her Majesty’s Government understand that many people not just in the region but in this country and, increasingly, in Israel itself believe that the only way to save a two-state solution, if it is not already too late, is to recognise a Palestinian state immediately, and that without that Her Majesty’s Government unintentionally may be contributing to the intractability of the problem rather than its resolution by giving a veto to one side through their policy on recognition?

Baroness Anelay: “One has to say that the Middle East process itself has not failed; it proceeds. Prime Minister Netanyahu and President Abbas continue to say that they are committed to a two-state solution. That is the way forward, whereas this country recognising Palestine now would not achieve anything. It would not remove the occupation or give everyone the opportunity to do what we need to do now, which is to focus on the people of Gaza and the rebuilding of it.”

It was Lord Grocott who finally skewered the Baroness to the House of Lords’ ornate woodwork by saying, “My Lords, various references to the problem of recognising a Palestinian state indicated that it would somehow inhibit the peace process. I ask: what peace process? What achievements can be chalked up to this alleged peace process? All we have seen from the process over the past 50 years is a continued diminution of the prospect of a Palestinian state because of the constant settlement activity in violation of all international law which the Israeli Government seem to be able to pursue with impunity.”

Yes indeed. The British people challenge Agent Cameron to produce just a tiny spec of evidence that successive Israeli governments ever wanted a just peace with the Palestinians