A Strange tale about ISIS 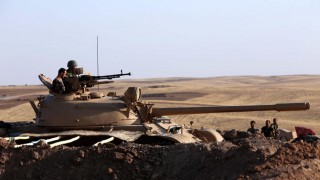 Never has a group been more secretive, more “capable,” even to the point of violating physical laws. They have money when there is no money; they have fuel when there is no fuel. They get floods of new recruits when all borders are sealed, even refugees detained —  but ISIS/ISIL fighters move like magic.
The divergent reporting on ISIS/ISIL itself is telling. Controlled media, as is now always the case, ignored the obvious questions, instead seemingly tasked with maintaining an endless drone of Iranian nuclear plots while the world burns down around them.
More recently, our Turkish friends say they are helpless, though they expect to soon have a radical nuclear jihadist state on their border they claim antipathy for. No one believes Turkey, no sane person at least. Even American vice president Joe Biden cited Turkey as a major source for ISIS/ISIL aid — aid that is ever increasing as does the flow of money.
The axis — Tel Aviv, Qatar, Ankara and Riyadh, and, we must include the banks of Zurich and London and the back rooms of Washington as well — is this why ISIS/ISIL is so secretive?


In January, I met with Sunni leaders to discuss the defense of Iraq, in particular Anbar and Baghdad.
Without violating security protocols, it would be reasonable to assume that I left days of meetings with the impression that there was a general belief among Sunni governors that Baghdad had no standing army and no intention of opposing ISIS/ISIL.
Other things were said as well, over optimism on behalf of some that ISIS/ISIL could be worked with.
There was always, however, an overriding belief that Iraq could survive, that clever men would use ISIS/ISIL to redress political inequities in Iraq’s American-made monstrosity of a government and yet retain a national identity.
I only said, “They don’t want Anbar, it’s desert, they are going to take Mosul on their flank and make a run for the oil.”

A solution was proposed, experts were consulted. You see, Iraq was left without an air force. Supposedly, the US had retrained an army the equal of any. That simply was a lie also. That money, over $1 trillion was stolen, all in banks, mostly the Cayman Islands.


American politicians, American and British “contractors” got some. “Others” split the rest as they had done with billions in oil revenue since 2003 when the US began stealing 40% of the oil shipped through Basra and Ceyhan.
Everyone knew, you could simply trace the ships and their capacity through the online site of the US Coast Guard and compare figures with revenue. A child could do the math — that, and the fact that the American who oversaw Iraq’s oil industry was my Pentagon contact at one time and close friend.
But we are talking about “blindness.” Armies have to eat, have ammunition, gasoline, but today armies have to have “eyes and ears.” Iraq had none, American had blinded them. ISIS/ISIL, however, is far from blind. That’s another story.
I was there to offer “eyes and ears.” While we sat through 74 slides, translating my commentary into Arabic as we went, it was outlined how satellites with 1 meter SAR (synthetic aperture radar) passing over every 6 hours, combined with aerostats, tethered balloons with cameras and sensors capable of seeing hundreds of miles, specially equipped OCULUS planes and Skyships, a secret development the US now uses for defense, could be put online in 56 days.

This would connect to intelligence fusion centers and provide minute by minute tracking of ISIS/ISIL movements, stop the influx of arms and cash, of jihadists, and paralyze their military operations. The presentation, beginning with “Top Secret/No Distribution” sits on my desktop. I wrote it. The companies involved were US, some Arab financed, some even Israeli, all with a strong track record. The price was high, tens of millions of dollars and crews and equipment were “on tarmac” because of the emergency situation.

Then, weeks later, we learned that something different had been chosen, that Iraq had taken this offering and had gone to Lockheed and Raytheon, two prime US contractors, who were to provide similar services, though in some areas they had no access to key technologies. The dollar figure was twenty times higher.
Without this equipment, the training teams, the advisors and scientists, Iraq would be not only blind, but their military could be crushed by any group that had what Iraq didn’t have — military-grade satellite imagery, surveillance drones, ground sensors and signals jamming and intercept capability — the things Iraq was offered, things ISIS/ISIL has had all along, things they should never have, not unless they are directly supported by either the US or Israel.
In the end, the deal, many many billions, was signed but nothing was ever delivered.

At the same time as the meetings with the Sunni leaders, other meetings were going on in Kurdistan. The Kurds knew they had a war coming. Turkey had been negotiating with their long-time enemies, the PKK, also the long-time enemies of the Kurdish government in Arbil as well. There was something very wrong, very sinister in this.
Kurds, longtime friends of the US — friends “sold down the river” by the US more than once — knew a “storm was coming.” They contacted their old friends in the US, their contacts at the major defense companies, US and UK, that coordinated intelligence operations in Northern Iraq, people who are longtime friends of mine.
The Kurds demanded help — help that never came.


I have worked with the Kurds, with the people of Iraq, many Americans have. Iraq is and was a complex nation, Baathists, Sunni groups based on complex interwoven family relations, a series of Christian sects with complex relationships almost 2000 years old, this and a Shia majority long abused during Saddam’s rule.
Iraq should be seen through the eyes of its people, a nation destroyed by the US, a nation trying to rebuild infrastructure, commercial life and restore a survivable balance that may well have prevented what we see now.
America’s insanity of the Bush years, 3 proposed false flag terror attacks that were to lead to an invasion of Iran, all made public by former National Security Council member and Veterans Today editor, Gwenyth Todd, still scars Iraq. General Petraeus and his “Sunni Awakening” — American millions spent to buy off extremist elements — is the basis for ISIS/ISIL.

It is not unsound to assume that Petraeus built ISIS/ISIL as leverage the US was to maintain over Baghdad — leverage to assure the US a platform for operations against neighboring Iran. This was his job; this was what America had to leave in place before being booted out of Iraq.
Has it “backfired” or is everything working exactly as intended? We see that Turkey is not concerned. Israel is not concerned. America’s bombing campaign, supposedly up to 1500 sorties a day, is now up to 5% of expected levels.
Money and jihadists are flowing in, through where and how nobody knows… Egypt? Israel? Turkey?
The Iraqi army, supposedly divisions of top level fighters trained to NATO levels, are not to be found. The American ISR (Intelligence/Surveillance/Reconnaissance) and intelligence fusion capabilities that were to guide Iraq to a successful defense are not to be seen.
The real “deliverable” capabilities were derailed, most likely through the US State Department, a very good guess. There seemed to be a desire to keep Iraq defenseless against ISIS/ISIL.

Gordon Duff is a Vietnam War Marine combat veteran who has worked on veterans and POW issues for decades and consulted with governments challenged by security issues; and is a senior editor and chairman of the board of  Veterans Today, especially for the online magazine “New Eastern Outlook”.