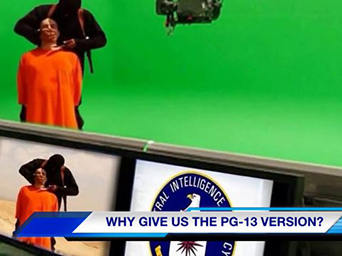 An American analyst says the video showing the murder of American aid worker Peter (Abdul-Rahman) Kassig “seems to have been set-up” in line with the “Islamophobic propaganda” behind the ISIL terrorist group.

In an interview with Press TV on Monday, Dr. Kevin Barrett, founding member of the Muslim-Jewish-Christian Alliance, discussed the reasons behind the Islamophobic nature of ISIL’s media coverage and how it is “designed” as an excuse for further intervention in the region.

“There have been a couple of previous beheadings which appear to have been actually staged, or photoshopped, so again it’s hard to tell what kind of publicity stunt this is, whether it’s even another real beheading or another staged one, or who knows?” Barrett asked.

The video was definitely “a publicity stunt designed to create the impression that there is a huge threat to America that has to be met with by lots of money for the military, intervention in the Middle East and bombing Syria,” he said.

The US bombs in Syria and Iraq have not really been “directed in the most strategic way towards targeting ISIL, but rather towards destroying the infrastructure of Syria,” he added.

Barrett said the “Islamic State” is not Islamic, and only acts as a “false-flag excuse” for the Western powers that want to “demonize” Islam.

“This ISIL group is a false-flag group. It’s not an Islamic radical group. It’s taken up where al-Qaeda left off, al-Qaeda being so heavily infiltrated by Western intelligence agencies that it was turned against Muslims, and against anti-Imperialists. It was turned into essentially a false-flag excuse for Western war on Islam and ISIL has been that from the very beginning.”

Barrett noted that even al-Qaeda dismisses the Islamic nature of ISIL Takfiris and the “supposed teaming up” between al-Qaeda and ISIL in Syria is “all theater.”

“What it is really about is destabilizing the region, providing an excuse for intervention and demonizing Islam,” he said.

“As an American Muslim, I am getting tired of this endless parade of Islamophobic propaganda that we are getting in our American media, with these beheadings. They [media] never show us the beheadings in Saudi Arabia, which happen at a pretty regular basis in ‘Chop-Chop Square’ in Riyadh, we never see those. We only see these dubious ISIL beheadings, which are designed to make Americans think that this is Islam.”

ISIL is not really Islamic, he continued. “They put the name Islamic State in there, just to provide more propaganda effect to make Americans and Westerners hate Islam.”

US President Barack Obama on Sunday confirmed the assassination of Kassig, describing his beheading at the hands of the ISIL terrorist group as “pure evil.”

“ISIL’s actions represent no faith, least of all the Muslim faith which Abdul-Rahman adopted as his own,” Obama said in a statement.

Barrett said that he would agree with what Obama said about the faith that Abdul-Rahman belonged to.

“But I would ask president Obama to go one step further and to reveal the real agenda behind ISIL and to change America’s Middle East policies and turn them away from this enslavement to Zionist expansionism and constant intervention, and step back to become an honest broker helping to maintain peace and stability in the region.”