Home Life Be thankful it hasn’t happened yet 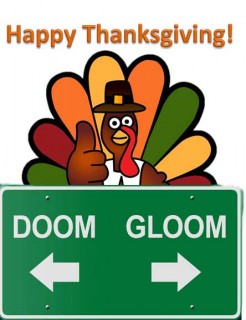 Be thankful. Be very, very thankful.

But it could be a whole lot worse.

And yes, I know it’s bad. Every week, Jim Fetzer and I bring you a hideously depressing summary of all of the awful things going on in the world. It’s a TV show called False Flag Weekly News, and it goes out live on NoLiesRadio.org every Thursday at 8 a.m. Pacific/11 a.m. Eastern. This week we will be bringing you a special Thanksgiving episode guaranteed to stuff your inner turkey with appallingly demoralizing reports about the most insufferably disheartening happenings.

If you watch False Flag Weekly News regularly, you will be atrociously well-informed about the unbearably hideous events transpiring on this benighted planet.

Even incurably optimistic people have been cured of that dread disease by watching False Flag Weekly News. One cockeyed optimist, simply by setting his computer screen exactly 28 inches from his eyes and focusing intently on it for the duration of a single 30-minute episode of False Flag Weekly News, was able to quickly achieve 20-20 vision, throw away his rose-colored eyeglasses, and cancel his weekly visits to the ophthalmologist.

Now he’s seeing a psychiatrist instead. Fortunately, she’s much better-looking.

Such things might happen to you too, if you made a habit of watching False Flag Weekly News.

Every week we bring you 25 or 30 stories, virtually all of them qualifying as spine-chilling, gut-wrenching bad news. If you survive watching our show, you will be in a position to withstand everything and anything that could possibly come your way, in accordance with Nietzsche’s axiom “whatever doesn’t kill me makes me stronger.”

But Thanksgiving is no ordinary Thursday. So this November 27th, as we kneel down before our national turkeys and plunge our carving knives into the juicy stuffing of our individual and collective dreams, it is incumbent upon us to remember the nearly infinite number of things that we ought to be grateful for. High on that list: The very large number of terrible, horrible, no-good, awful things that, somehow, haven’t happened yet.

Here are some of those things. Each of these stories represents an authentic newspaper headline or TV news lead-in, just like the ones we report on False Flag Weekly News…except these dreadful things have not occurred…at least, not yet.

Packers Lose to Patriots at Lambeau

WWWIII Begins, Ends; Everybody Dead; Why Are You Reading This?

And if that last one ever happened, folks, you wouldn’t get to read any more delicious holiday articles like this one. Ever, ever again.

So be thankful it hasn’t happened yet.