Edited and introduced by Lasha Darkmoon, with additional notes and comments

“In the German race, there is nothing but evil. Use force and break the racial pride of these German women. Take them as your lawful booty. Kill!”  — Ilya Ehrenberg, Jewish propagandist in the Stalin regime

This shockingly explicit review of one of the most outspoken books about Allied atrocities against postwar Germany is not for the squeamish.

If you have a delicate constitution and wish to protect your mind from images of extreme violence, images bordering on the grotesquely obscene and satanic, please read no further. If, on the other hand, you have an appetite for the truth and insist on taking a peek into the Devil’s cauldron, then you have only yourself to blame if you throw up after reading this hell’s a-popping review.

The review concerns itself with the savage rapes and murders of 2 million German women at the hands of Red army soldiers, the bulk of them Mongols, Tatars, and Jews with an atavistic hatred of the White race. These Russian troops had been incited to lust murder by the psychopathic Jewish propagandist Ilya Ehrenberg.

One German woman came to her priest and broke down in tears. “Father, I can’t go on living! Thirty of them raped me last night.” (Goodrich, p.158)

The German clergy was only too aware of the rape and mass murder of Catholic nuns, many of them bedridden geriatric women. 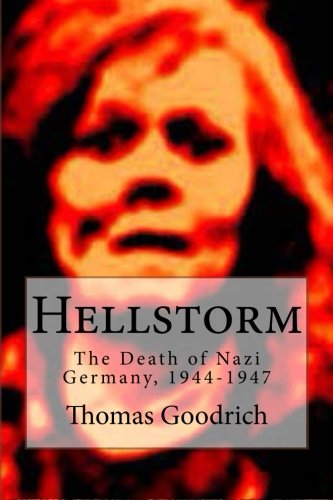 One of these priests writes in his diary:

“The girls, women, and nuns were raped incessantly for hours on end, the soldiers standing in queues, the officers at the head of the queues, in front of their victims.
During the first night, many of the nuns and women were raped as many as fifty times. The Russians knocked them down, kicked them, beat them on the head and in the face with the butt-end of their revolvers and rifles.

The same dreadful scenes were enacted in the hospitals, homes for the aged, and other such institutions. Even nuns who were seventy and eighty years old and were ill and bedridden were raped and ill-treated by these barbarians. (Ibid. p.84)

The Americans and the Brits knew all these atrocities were going on but did nothing to stop them. They stood by and saw it all happening, cruel accomplices to the crime. Indeed, many of them joined in the bloodbath of sadistic sexuality: Americans, Brits, Frenchmen, Poles, Moroccans, and, last but not least, Jews from all over the world salivating for revenge against the White race — in particular, a contingent of lust-crazed Jews from Palestine.

“Staggered by what he had seen and heard, a German officer tried desperately to make sense of the disaster; to understand the minds of men ‘who find . . . pleasure in raping the same woman over and over, dozens of times, even while other women are standing near.’” (Ibid. p.93)

Tearing German women apart, including little children before their parent’s eyes, was one of the perks of war for these coldhearted killers. These atrocities have either been minimized or covered up by court historians since there are not enough tears to go around. All our tears need saving, it would seem, for the victims of the Holocaust. They alone must be commemorated and held in honor in perpetuity.

Here are a few chilling quotes from Hellstorm which you will not find in Sexton’s book review below, though you will find other quotes there that are equally horrifying.

“Of all the methods used to express its anger, the Red Army said it best with rape. From eight to eighty, healthy or ill, indoors or out, in fields, on sidewalks, against walls, the spiritual massacre of German women continued unabated. (p.155)

The mothers had had to witness how their ten and twelve-year-old daughters were raped by some 20 men; the daughters, in turn, saw their mothers being raped, even their grandmothers. Women who tried to resist were brutally tortured to death. There was no mercy. (p. 159)

When even violated corpses could no longer be of use, sticks, iron bars and telephone receivers were rammed up their vaginas. (p. 155)

The women were raped, not once or twice but ten, twenty, thirty, and a hundred times, and it was all the same to the Russians whether they raped mere children or old women. (p.79)
“Those women who were pregnant, on their menstrual cycle, or enduring diarrhea, suffered like all the rest. Nothing, it seemed—not age, ailment, or ugliness—could repel the Red rapist. Even death was no defense.

‘I saw some twenty Red Army men standing in line before the corpse of a woman certainly beyond sixty years of age who had been raped to death,’ one sickened witness recorded. ‘They were shouting and laughing and WAITING FOR THEIR SATISFACTION OVER HER DEAD BODY.’” (Emphasis added, p.84)

This haunting book review will take you to hell and back. Prepare for a roller coaster ride into a landscape of terror that neither Dante in his Inferno nor Hieronymus Bosch in his maddest paintings could ever have imagined.

The Rape and Mass Murder of German Women after WWII

“Who could inspire such madness . . . all the torture, abuse, burning, systematic rape and beatings? Thomas Goodrich answers this question: the Jews in Communist Russia.” — JA Sexton
What is the hell?

I’ve often pondered what the concept of “hell” entailed; what it means to be living in the absence of “God,” the supreme creative force behind all life. After reading Thomas Goodrich’s breathtaking and physically nauseating analytical narrative of the burnt offering – Holocaust – of Germany I now know what hell looks like and how its inhabitants live and behave.

Relentless, reckless, and senseless hate of a magnitude so profound, so immense, that I am still unable to understand it. And then the irony of it all: that former inhabitants of Europe – Europeans – were responsible for inculcating hell in their own Heimat (homeland).

Who but the Devil itself could make a family turn on itself, causing it to tear itself apart in such a murderous, inhuman fashion that the victims are left unrecognizable after all the torture, abuse, burning, systematic rape, and beatings subside?

Who or what could inspire such madness? Thomas Goodrich answers this question silently, subtly, but matter-of-factly – the Jews in Communist Russia (the former USSR) and Capitalist America and Britain.

Hellstorm is the type of book that changes lives. Goodrich is the type of author who literally puts you, the reader, there in the midst of hell. And what is this hell that he forces you to experience page after page, torture after torture, and rape after rape? One that has been all but forgotten; the only hell the modern age really knows:

Goodrich describes the Allied-induced inferno in more detail than most need to know to gain an understanding of the depths of Allied criminality and hatred, but the detail is necessary. Without detail no one will really know what hell is like. Here’s a taste of it.

A German woman has her jaws forced open by the filthy brutish hands of a Soviet serial rapist. He literally spits into her mouth and forces her to swallow his salivary filth as he rams her body again . . . and again . . . and again – until he’s satisfied fulfilling his oath to Stalin and his chief Holocaust propagandist, Ilya Ehrenburg.