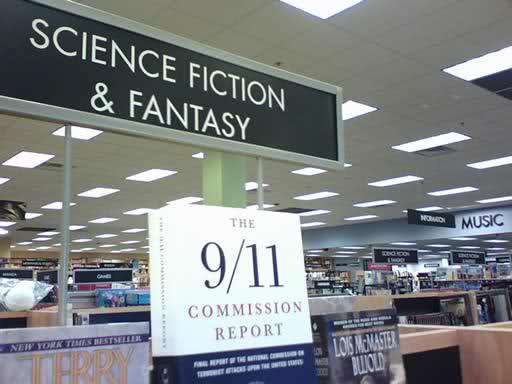 “Let’s borrow a page from South Africa and impanel a Truth and Reconciliation Commission to examine race in America. The model should be the 9/11 commission or the Warren Commission on President Kennedy’s assassination, and it should hold televised hearings and issue a report to help us understand ourselves.” – Nicolas Kristof, New York Times, 11/30/14

Maybe they are. But Kristof, in his call for a “truth commission” modeled on the two biggest and most satanic lies ever told on earth, has got to be the most clueless of all the clueless white guys in America.

African-Americans know full well how cruel and corrupt America’s power structure really is. They’ve been on the receiving end of it for centuries. And they know how deep the denial runs, and how white folks habitually whitewash the truth.

A Commission on Race modeled after the Warren Commission and the 9/11 Commission Report?!  How could any investigation of racial issues possibly fabricate a cover-up report as ludicrous as those fetid, stinking documents?

Let’s give it a shot.

The 9/11-Warren Commission Report on Race in America

By Philip Zelikow, channeling the spirit of Allan Dulles

Conclusion: Darren Wilson acted alone. Allegations of the existence of other racists or incidences of racism in the United States, inside or outside of police departments, are baseless conspiracy theories.

Saturday, August 9th, 2014 dawned warm and humid, with a 50-50 chance of scattered showers or thundershowers, in the central United States. In Ferguson, Missouri, happy African-Americans awoke in their large, prosperous homes with sprawling, well-tended lawns and gardens, and busied themselves getting ready to send their children off to first-rate schools, and then commute to excellent, high paying jobs.

For teenagers like Michael Brown, conditions could not have been better for a safe, pleasant walk to and from the local convenience store.

World Trade Center Building 7, a 47-story high-rise built by Silverstein Properties, was the highest-security building in New York. Featuring the second-biggest CIA station on earth, as well as the SEC Corporate Crime Unit with its Enron files, WTC-7 was also the site of New York City’s Emergency Response Bunker, a fortified 23rd-floor unit where officials would form a command post to oversee the government response to any disaster, natural or otherwise, that might occur. (Wait a minute…this is the chapter I left out of the 9/11 Commission Report! What is it doing here?)

Ahem…as I was saying, Police Officer Darren Wilson’s dental records show that he had fairly nice teeth, roughly on par with Lee Harvey Oswald’s. This important information is being included in order to assure you that the report you are reading is so painstaking and thorough that there is no reason why you should actually read it, much less think about it. And if you think THAT’s tedious and irrelevant, you should see the 10,000-page NIST report on what supposedly happened to the Twin Towers.

As he entered the convenience store, Michael Brown, Ph.D. – who had earlier that month become the first African-American on his block to earn a doctorate in the University of Virginia’s Creation and Maintenance of Public Myths program – decided to purchase a high-quality Cuban cigar and then smoke it to celebrate his academic achievement. As he snatched the cigar, Mike Brown began to ruminate about the evil deeds of Lee Harvey Oswald, Sirhan Sirhan, James Earl Ray, John Hinckley Jr., Mark David Chapman, Lynette “Squeaky” Fromme, Mohammed Atta and the 19 Very Naughty Arabs, and Paul Wellstone’s drunken pilot.

Cradling the full-bodied, rich, earthy-flavored H. Upmann cigar (JFK’s favorite brand) in his palm, Brown was suddenly struck by a disturbing thought: What if it had been all those Cuban cigars he smoked that gave Hugo Chavez that fast-acting cancer of the type David Ferrie had developed at his lab in New Orleans? Lost in thought, Mike Brown exited the convenience store, still holding the cigar he had forgotten to pay for.

Across the street, on the sixth floor of the Missouri School Book Depository, Officer Darren Wilson slowly raised his 6.5 mm Mannlicher-Carcano rifle and trained its sights on Michael Brown. A communist and Islamic terrorist who had recently returned from visiting the Cuban embassy in Mexico City, Saddam Hussein in Baghdad, and Osama Bin Laden in a cave in Afghanistan, Darren Wilson burned with  hatred of America in general, and the freedom it represented in particular.

Officer Wilson squeezed the trigger. A three-centimeter copper-jacketed lead-core 6.5 slug exited the rifle, boarded a plane at the Portland, Maine airport, transferred to Flight 11 in Boston without its luggage, dropped a hijacker’s passport outside the ruins of the World Trade Center, planted a Shia bandana next to a 15-foot empty hole in the ground in Shanksville, Pennsylvania, caused three New York skyscrapers to disappear at free-fall speed, struck the Pentagon leaving a small hole in the first floor with undamaged windows all around it, and finally returned to Ferguson, Missouri, where it repeatedly entered and exited Michael Brown’s body, causing six gunshot wounds to his head and chest and wounding Governor Nixon. The bullet, looking as pristine as the day it was manufactured, was later discovered on Michael Brown’s stretcher.

Officer Wilson was immediately arrested and charged with murder. Fortunately for the nation, a kind-hearted mob hit-man named Jack Rubenstein, who wished to spare Michael Brown’s parents the pain of a trial, drew his gun and walked through a sea of policemen to shoot Wilson as he was being transferred to a different jail.

The conclusion is indisputable: Wilson acted alone. Now that we have achieved closure, and put to rest any suspicions that America has a racial problem or that policemen ever treat black people with anything less than the utmost kindness, respect, deference, and humility, we can go back to fighting the War on Terror against those nasty little brown people with funny accents who hate our freedoms and refuse to recognize Israel’s right to exist.