[Listen to my new interview with James Perloff on “Pearl Harbor: Roosevelt’s 9/11“] 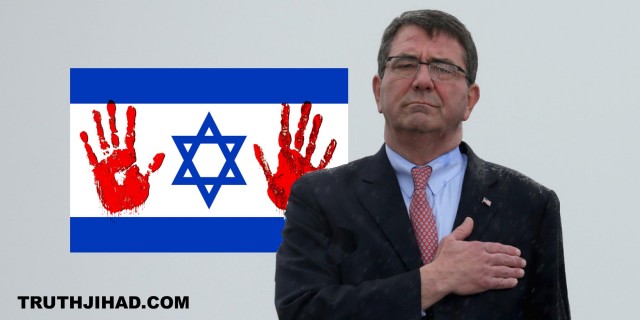 Would Obama appoint a known 9/11 criminal as Secretary of Defense? Since foreknowledge of an act of high treason and mass murder constitutes criminal conspiracy – and since participation in plotting such an act would be an even worse crime – maybe it’s time to ask some hard questions about Ashton Carter. Such as: How did he and his buddy and co-author Philip Zelikow know, back in 1998, that the 9/11 “New Pearl Harbor” was just around the corner?

Ash Carter Predicted 9/11 and Its Aftermath

The article makes a case for Carter’s precocious prowess at precognitive prognostication. It is worth quoting at length:

— Here’s Carter in a 1998 essay in Foreign Affairs, co-written with Philip Zelikow, who would later be executive director of the 9/11 Commission, and former Deputy Defense Secretary John Deutch:

“An act of catastrophic terrorism would be a watershed event in American history. It could involve loss of life and property unprecedented in peacetime and undermine America’s fundamental sense of security, as did the Soviet atomic bomb test in 1949. Like Pearl Harbor, this event would divide our past and future into a before and after. The United States might respond with draconian measures, scaling back civil liberties, allowing wider surveillance of citizens, detention of suspects, and use of deadly force. More violence could follow, either further terrorist attacks or U.S. counterattacks. Belatedly, Americans would judge their leaders negligent for not addressing terrorism more urgently.” http://fam.ag/1wtevyQ

— And here’s Carter in a September 2000 book chapter he co-wrote with former Defense Secretary William Perry:

In the coming years, “an incident of catastrophic terrorism on the U.S. homeland would be likely to spark concern and effort on a comparable scale” to the reaction to the Soviet detonation of an atomic bomb in 1949. “It is easy to see how the concern could escalate to hysteria, and how actions taken in the angry aftermath of a destructive event could be corrosive of civil liberties as well as counterproductive. Because the aftermath of [a] homeland attack could be as fearsome as the attack itself, our government should begin to organize for this future threat now.” http://bit.ly/1yQxuCw

The Politico column leaves out one crucial observation: Ashton Carter and Philip Zelikow did not only foresee that an act of “catastrophic terrorism” would transform America the way Pearl Harbor did; but they even predicted precisely where it would strike. Their 1998 Foreign Affairs article actually predicted that the complete destruction of the World Trade Center would give America its “New Pearl Harbor.”

Since hindsight is always 20-20, some may say: “Well of course they did! It was so OBVIOUS that the World Trade Center would be targeted again! Anyone could see that the WTC would be annihilated in less than three years.”

First, the 1993 WTC bombing, which was perpetrated by corrupt elements of the FBI, led to a huge uptick in Trade Center security. The only people with a reasonable shot at even attacking the WTC, much less seriously damaging it, much less demolishing it, were the people who controlled that security apparatus.

More pertinently, what are the odds that a ragtag band of shrimpy little cocaine-snorting stripper-dating pork-chop-relishing gambling-junket-loving “radical Muslim” alcoholics who couldn’t even fly Cessnas would somehow manage to destroy the entire World Trade Center complex, including its three massive skyscrapers, with two planes…and simultaneously bomb the most heavily-defended building on earth, the Pentagon? If we had an infinite number of alternate universes and could run that plot over and over to see how often it would succeed, the results might look something like this:

Odds that all of the plotters and “hijackers” would maintain operational secrecy and successfully insert “hijackers”carrying package-openers as weapons on all four planes: ONE IN FIVE HUNDRED.

Odds that if they somehow got on the planes, the five-foot-tall 100-pound “muscle hijackers” would get into the cockpit, overcome the big, tough, military-trained pilots, and subdue all the passengers on even one of the planes: ONE IN ONE HUNDRED.

Odds that such alleged hijackers could seize control of even one plane without that pilot or copilot squawking the hijack code – a procedure that takes a couple of seconds? ONE IN ONE THOUSAND.

Odds that drugged-up alcoholic playboys posing as Muslims, who were such bad pilots they were not allowed to solo in Cessnas, would be able to direct even one plane to its target and hit it at aeronautically impossible speed – a feat that the world’s best pilots have been unable to replicate in simulators tweaked to allow the planes to fly that fast at sea level? ONE IN A MILLION (and that’s being generous).

Odds that the Pentagon, the best-defended building on the planet, could be hit by a “hijacked” plane with no air defense response almost 90 minutes after emergency phone bridges between the Secret Service and the FAA were set up to deal with “terrorist hijackings”? ONE IN TEN THOUSAND. (And that’s assuming our military is incompetent to the point of insanity. With a competent military, it would be one in a trillion at most.)

Odds that a suicide hijacker would WANT to crash a plane at grasstop level into the relatively empty, newly-reinforced West Wing, rather than simply dive into the roof towards the East Wing where all the brass were? ONE IN TEN THOUSAND.

Odds that the same hijacker, stupid enough to make the above choice, would be competent enough navigate the obstacle course of the alleged approach path – a feat that highly skilled pilots cannot replicate in a simulator – and actually hit the building? ONE IN TEN THOUSAND.

So what are the odds that the 9/11 plot, with all of its grotesquely improbable elements, could succeed? I have no idea; when I tried to multiply all those numbers together, my calculator imploded into its own footprint.

No wonder the insurance companies allowed Netanyahu’s close friend, the notorious Zionist mobster Larry Silverstein, to purchase the condemned-for-asbestos World Trade Center two months before 9/11 and then double the insurance…and even change it to cash payout. The odds of anything really bad happening to the WTC seemed astronomical.

I think we can all agree that Ashton Carter’s 1998 foreknowledge that 9/11 would soon happen was not gained by his being a really smart guy who realized exactly what the dastardly terrorists were capable of. Instead, Carter and Zelikow were presumably part of the team that designed the 9/11 false flag deception.

Carter’s telltale 1998 article, which in a sane world would by itself be enough to get him hanged for treason, offers clues about the real motives of the real perpetrators.

Carter and Zelikow’s key prediction is that the coming act of catastrophic terrorism would “…undermine America’s fundamental sense of security, as did the Soviet atomic bomb test in 1949. Like Pearl Harbor, this event would divide our past and future into a before and after.”

Let’s unpack the above sentence.

Pearl Harbor divided America’s past and future into a before and after because it undermined the nation’s fundamental sense of security. Before Pearl Harbor was the era when Americans felt secure…and reluctant to go to war. After Pearl Harbor was the “whole new world” in which Americans would embrace their new role as world’s rogue cop – and murder over 50 million innocent people in undeclared wars and CIA interventions.  Vltchek and Chomsky do the math: “Along with the 55 million or so people killed as the direct result of wars initiated by the West, pro-Western coups and other conflicts, hundreds of millions have died indirectly in absolute misery, and silently” since World War II. This holocaust, which William Blum calls “the American holocaust,” is by far the greatest mass killing ever inflicted on the world, dwarfing all others by orders of magnitude.

How did a single event – the alleged surprise attack at Pearl Harbor on December 7th, 1941 – transform the American people so profoundly that they suddenly abandoned George Washington’s non-interventionist foreign policy and embraced permanent war for empire?

The Soviet atomic bomb test of 1949, as Carter and Zelikow suggest, reinforced the lesson of Pearl Harbor. It helped Harry Truman “scare the hell out of the American people” in order to keep the US military-industrial complex on a wartime footing even in peacetime.

Ash Carter and Phil Zelikow apparently saw that something similar could be accomplished with a false-flag “New Pearl Harbor.” In 1998, when they published their article in Foreign Affairs, the end of the Cold War had left Americans feeling way too secure. Military budgets, as a percentage of GDP, were falling. Citizens clamored for a “peace dividend.” And perhaps most importantly, America’s softness in the Middle East was allowing anti-Israel forces – including Saddam Hussein’s Iraq, Islamic Revolutionary Iran, Qaddafi’s Libya, al-Turabi’s Sudan, various “terrorist” groups, and so on – to support the martyrdom operations that were threatening Israel’s existence.

Philip Zelikow, Carter’s co-conspirator in foreseeing the 9/11 event, let the cat out of the bag.  On September 10th, 2002 – the eve of the first anniversary of 9/11 – Zelikow, speaking to a crowd at the University of Virginia, admitted that the real purpose of the “New Pearl Harbor” was to spur the United States to defend Israel:

“I’ll tell you what I think the real threat [is] and actually has been since 1990 – it’s the threat against Israel. And this is the threat that dare not speak its name, because the Europeans don’t care deeply about that threat, I will tell you frankly. And the American government doesn’t want to lean too hard on it rhetorically, because it is not a popular sell.”

Unlike Philip Zelikow, Ashton Carter is not Jewish. Why would he help orchestrate a “New Pearl Harbor” designed to create a whole-new-world in which the US bankrupts itself, morally and fiscally, by waging permanent war against Israel’s enemies?

The answer appears to be that although Carter is not Jewish, he is a “kosher gentile.” Carter has made a career of serving as token goy in groups of hard-line Jewish Zionists. For example, he is the token goy (alongside kosher co-authors Dennis Ross and Michael Makovsky) behind JINSA’s Carter-Makovsky-Ross Report railing against the Iranian nuclear program.

Ashton Carter is such a close associate of Paul Wolfowitz, the 9/11 mastermind who began working on the New Pearl Harbor project while studying under Leo Strauss in the 1960s, that Carter’s appointment as SecDef has been called “the second coming of Wolfowitz.”

You don’t need to be a psychic (or a traitor plotting an attack on your own country) to foresee that Ashton Carter’s nomination as Secretary of Defense means that something very, very bad is coming down the pipe.

Trump could hang Bill Kristol over 9/11