If you read that half-baked fantasy called the 9/11 Commission Report and follow the footnotes, you’ll find that virtually the only source for the Commission’s story about the alleged hijacking plot was the alleged testimony of Khalid Sheikh Mohammed (KSM) while he was being tortured for weeks and months on end. Yet the Commission never saw or spoke to KSM. It never witnessed his interrogations. It never even saw a single video, audio recording, or transcript of KSM’s interrogations. It simply accepted secondhand accounts of what KSM supposedly said under torture. Later the CIA illegally destroyed the audio and video recordings of the interrogations, leading Bob Baer – the former top CIA officer in the Middle East – to say “the conspiracy theorists are going to have a field day with this” and to assert that 9/11 looked like an inside job because so much evidence pointed in that direction.

Why would the CIA destroy virtually the only alleged evidence supporting the claim that 19 Arab hijackers plotted and executed the 9/11 attacks? The answer was always obvious to those with eyes to see and ears to hear. Now that the Senate report on CIA torture has been released, it is even more obvious. 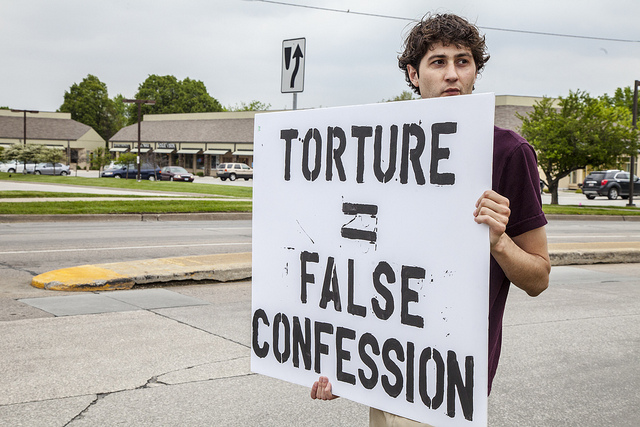 Is the newly-released US Senate report on CIA torture a limited hangout?

It certainly looks that way. The report tells one very important half of the truth. But it leaves out the other, even more important half.

The Senate report reveals that the CIA engaged in long-term, viciously brutal torture of “terror suspects” under the false pretense of trying to extract information. In fact, the torturers knew full well that such long-term torture is completely useless…at least if the purpose is to extract timely, accurate data.

But it works wonders for extracting false confessions…and “breaking” innocent suspects in order to brainwash them into believing they are guilty.

The CIA knows this. A decade before the “War on Terror” began, the Agency was already aware – as its own documents state – that “inhumane physical or psychological techniques are counterproductive because they do not produce intelligence and will probably result in false answers.”  It knew that the torture program it had reverse-engineered from North Korea’s in the 1950s had only one purpose: To break captives so they will falsely confess to crimes they have not committed.

If you have captured an enemy and you want to extract information, there are two ways to do it. The time-honored way, which is invariably effective in the hands of a good interrogator, is to build rapport with the captive. In the real world, there is no reason to do anything else.

In the paranoid fantasy world of the neocons, however, there is always the “ticking time bomb” scenario. For example: In the extremely unlikely event that someone like, say Alan Dershowitz, has concealed a nuclear weapon in a Manhattan basement, and you need to find it before it goes off this afternoon, all you have to do is attack Dershowitz’s teeth with a dentist’s drill. Correctly applied, this approach quickly produces more pain than any human being can endure.

In the case of a sub-human weasel like Dershowitz, though, you probably wouldn’t have to do anything like that. A simple “Alan, tell me where you put that Dimona mini-nuke or I’ll kick your Zionist ass” would suffice.

So why did torture advocates like Dershowitz and his CIA acolytes James E. Mitchell and Bruce Jessen insist on subjecting “terror suspects” to long-term interrogations aimed at “breaking” the prisoners – a practice whose only possible purpose is to produce false confessions and inculcate in the subject the false belief that he has committed crimes that he did not, in fact, commit?

The answer is staring us in the face. But you won’t find it in the New York Times.

The real 9/11 perpetrators – a team that presumably included Dershowitz, Mitchell, and Jessen – needed to blame their crime on “radical Islamic terrorists.” But Bin Laden wasn’t cooperating. On the contrary, he repeatedly insisted during the fall of 2001 that he had nothing to do with 9/11. Rather than taking credit for the crime of the century, as the perps had hoped he would, Osama said the attacks were un-Islamic because they killed innocent non-combattants. The real perpetrators, Bin Laden darkly suggested, had their own agenda. He hinted that American Jews, not foreign Muslims, were the likely culprits.

The CIA responded by creating a fraudulent “confession video” designed to convince the world that Bin Laden and Islamic radicals were responsible for 9/11. One of America’s leading Bin Laden experts, Duke University professor Bruce Lawrence, has pointed out that this “confession video” is a patently obvious fabrication. In an exclusive interview with Truth Jihad Radio, Lawrence stated “it’s bogus,” and said that all of his many acquaintances who work on the Bin Laden detail for Homeland Security and other agencies also know that this video is “bogus.” They publicly pretend otherwise, Lawrence suggested, because they need to (falsely) pin 9/11 on Bin Laden, in order to cover up the horrible truth.

And just as the CIA needed a false Bin Laden “confession” to hide the truth about 9/11, they also needed false confessions from other “radical Muslim terrorists.” To get those false confessions, they engaged in widespread, systematic, long-term torture. Khalid Sheikh Mohammed – who apparently was broken and brainwashed into believing he not only masterminded 9/11, but also kidnapped the Lindbergh baby, assassinated JFK, made off with 1980s Savings and Loan money, helped OJ kill Nicole, engineered the 2008 financial crisis, and so on, – is the walking, talking result of the CIA’s torture-brainwashing program.

*The Secret Service got drunk the night before and “incompetently” allowed JFK to be assassinated – then the Dallas Police “incompetently” stepped aside to allow Ruby to walk through a crowd of cops with his gun drawn to kill Oswald.

*US Air Defenses “incompetently” forgot to scramble fighter jets during the nearly two hours that allegedly-hijacked planes were allegedly flying all over the eastern half of the US and attacking the nation’s most sensitive targets…even though when a passenger jet strays from its course, it normally takes about ten minutes for a fighter jet to arrive and lead it back on course – a routine event that happens about 100 times per year, except on 9/11/2001.

*The Secret Service “incompetently” allowed President Bush to remain in a pre-scheduled known location for an hour while the nation was allegedly under surprise attack from the air.

So now, in addition to these and countless other examples of the “incompetence” excuse, we are asked to believe that the CIA was simply incompetent when it engaged in long-term systematic torture. Despite the well-known fact that the CIA torture program adapted to the post-9/11 environment was designed for only one purpose – to produce false confessions – we are asked to believe that Khalid Sheikh Mohammed and other torture victims were telling the truth about 9/11, even though all of their other absurd confessions to crimes they could not possibly have committed are fabrications.

If you really believe that, please allow me to lock you up in a dungeon and torture you for several months or several years. I’m pretty sure that will change your mind.