Home Life Half Moon Over Damascus 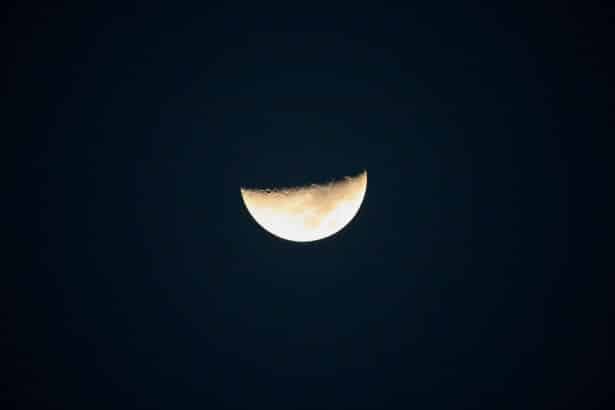 Take me off to the half-moon over Damascus, where half-lives are split
Into billions of crystals of cognizance.
What is a terrorist?
A death fighter. That’s as opposed to a freedom fighter.
So many damn lives. So many festivals to the dead. Dead people
As well as dead concepts. Communism. Capitalism. Terrorism.
All isms are sophisms. It is a world turned inside out—in which
Nietzsche would have argued that God is alive but for the fact that
Nietzsche was Jewish, and when Jews expound and communicate with
Non-Jews God must always be dead, buried, and forgotten (except
During the annual menorah-lighting in front of the White House),
But I saw half of God’s face in the half-moon over Damascus. Here’s the thing:
The menorah in front of the White House gives off a false light, but the light from the
Heavenly moon over Damascus is genuine and real.

I want to spread my wings and go flying upward
Toward the half-moon over Damascus.
What is a terrorist?
The entities of Ein Gedi and the colossal will of failure.
Sacrificial goat kids in Muslim dress. Terrorists are those who fired a round
Of grapeshot at the mainstream media only to have it bounce back into their eyes
And blind them. It was a tragic accident. Grapeshot and terminal darkness.
Satan smiled. For nearly 2000 years Satan had had both hands and both feet
Caught in a whipped cream pulverizer. He was convinced it was an iron vise.
It wasn’t. It was only a whipped cream pulverizer. Christ had something to do
With putting the delusion into his head, but that’s a long story we’ll
Save for another day. The man who disencumbered him of this illusion was
Edward Teller, who had turned 120,000 human beings instantly into dust particles at
Hiroshima and Nagasaki. Teller thought it was good practice. So did Satan.

I reached out my arms toward the half-moon over Damascus,
For I loved your light and saw in you the majestic greatness of God.
What is a terrorist?
Someone whose skilled hands are set to work.
It started out with the more harmless activity of lopping off the heads of flowers,
But Satan, predictably, was dissatisfied and took out his frustration
By gulping down a glass of clear liquid which he at first took for water but which
Turned out to be benzene, which gave him a case of heartburn but at the same time
Did not assuage his anger. He then ordered a batch of illustrated storyboards
To demonstrate how the flowers were to be replaced with children. After a while
The terrorists grasped the concept, and then with the movie cameras
Rolling they all took their first trial run. It is the first sound of nothingness.
Yet the wonderful smell of fresh basil cooking came to me while I sat in my daughter’s
Kitchen, as the half-moon bathed in splendor the traffic flowing by outside.

With a loving, tender smile I sought the half-moon over Damascus, for
It is the principle permeating the universe; it is neither negligent or shameless.
What are terrorists?
Circus frogs jumping into the air on command! It was an act never before seen!
ISIS. Al-Nusra. The Free Syrian Army. Dumb, dumber and dumbest (respectively in
that order). Gray matter that sprouted out of black matter and turned finally
Into pink matter. Satan the buffoon whispered into the ear of Barack Obama,
“Here’s what we’re going to do…” and the US began dropping supplies
To ISIS while pretending to bomb them. It is the second sound of nothingness.
The earth is the field where good and evil are sown and reaped,
But the moon over Damascus is a pipit in an undead tree, its song one of
Fetterless existance, the whimsical musing of an ancient verse:
Love your neighbor as you love yourself.
These old humanities can never be covered up with darkness.

They under this moon see the rain that talks
And the homicide in the morning dew.
A fast forward dive—the grub worm goes live!
In reality the powers held by the few
Are a bucket for kicking in the thin shadows long,
In the fading light of the late Western sun,
And the midnight sun is the moon, I knew,
A radiant strobe, a ringlet begun…

What is a terrorist?
A paraplegic caterpillar with its own sense of specialness,
The moon replied.

Since pristine times this messenger
Softly reassured our gaining.
We played a flute, we sang a dirge—
This we gave as the moon was waning.
Rummaging here, searching there,
An estuary ever taxing;
Wisdom, joy—resultant fruits,
A reservoir as the moon is waxing!
Beauty inexhaustible…
The nimble, agile, graceful gull
Whose flight the earthbound often yearn,
Heart and soul—the moon now full!

Richard Edmondson was part of a US delegation at a conference on combating terrorism and religious extremism held last month in Damascus.