Home Investigations Caught: The Backstory on the Paris Anti-Semitism Hoax 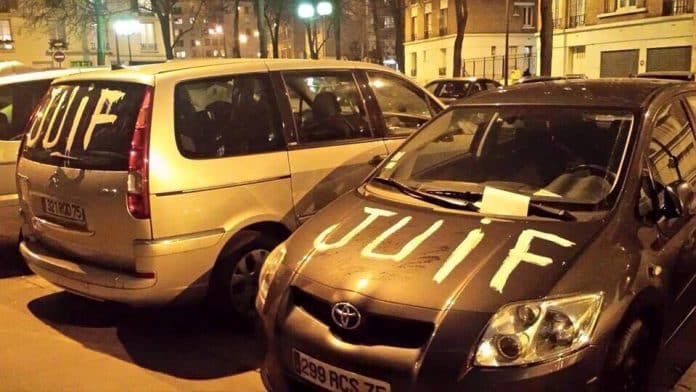 In the run up to the controversial Netanyahu “uninvited” visit to the US, staging “persecution theatre” is keeping some “pro-Semetic” septuagenarians busy.   Even when caught “red handed,” the concept of “exceptionalism” doesn’t stop the lying.

This week a French national with ties to Jewish activist groups was arrested for spray painting “Juif” on 20 cars.  Despite the fact that a French citizen of Jewish heritage was arrested, US conservative websites run by Pam Geller and that dowdy blonde McCain girl, among dozens of others, are spinning the story without the real punchline.

Does this further prove, when added to the volumes of evidence, that the “Hep-Toe” attacks in Paris were staged?  Considering the flagrancy of what we are seeing, yes it does.

Stormfront and the ADL had a field day with this one.  Stormfront loves publicizing whenever Jews are caught painting swastikas on things, which is fairly often.  No matter what actually happened, even when an ADL employee is caught, and they have been, the Foxman run organization sticks to its guns and call them “Nazis” even when its their own family members.

When we look at this story, a “perp” who spends his life it seems, spraying swastikas all over Paris, caught again and again, a virtual “one man holocaust,” we take note.

This is the story as reported in Metro News, Paris, yes, a real news publication:

Trivia – A 73 year old man was caught Monday trying to tag the word “Jew” on vehicles of the 16th district. The man and his wife, who are Jewish, had filed a complaint in July and August following antisemitic graffiti being discovered on their building.

The police had strong suspicions that have been confirmed. Monday around 4 pm, a man was caught trying to write the word “Jew” on parked vehicles avenue du General-Clavery avenue Dode de la Brunerie in the 16th district. Twenty cars were tagged. “The police handcuffed him, and ‘they have caught me’ he said,it’s crazy for doing this .’

The suspect was taken into custody in stride. This man was born in April 1941 and named Pierre B. was already known to police, not as a suspect but as a victim. Last summer, he would indeed twice visited the police station of the 16th district to denounce anti-Semitic remarks.

Not the First Time

In July, Peter and his wife Suzanne B., who are Jewish, went to the police to report the presence of swastikas on their mailboxes, their bearing and on the door of their dwelling in a building owned by the Property management of the City of Paris (RIVP) and located rue Abel Ferry (16th). In August, they made another similar complaint.

Six months later, in December of new graffiti was found . “Dirty Jew” swastika and other tags are found on the walls of the building. Same in January. “It started to do a lot, says a source close to the case. Several people were interviewed and writing tests were carried out … This is where the police found that there was something really weird in this story. “

The graffiti was in what appeared to be Peter B’s handwriting.

Indeed, comparing the scriptures, investigators found that the complainant was eerily similar to that found on the walls and the mailbox of the building including. “Another coincidence, B. has indicated that the couple had the housing unit to protect themselves. During this period they were gone, there was no graffiti. The police were convinced that Peter and Suzanne B were guilty of the anti-Semitic graffiti, but lacked proof.  “

Tuesday afternoon, Pierre B. was still in custody. All residents, they were shocked. They too had heard of this desire of the couple to change accommodation. “From there to attack the Jews, moreover when we know that the wife of the suspect is Jewish, it’s surreal,” concludes a neighbor.

The suspect’s custody was extended Tuesday to 17 hours. According to our information, the individual was to be presented to a psychologist in the evening.

This is the same story in the Yeshiva News, however this time it wasn’t Jews at all.  You see, we read the Stormfront article, followed their link to a French ultra-nationalist site.  Then we took language out of the quote and searched for a real news story, thus giving us the one featured above, one we could actually credit. The story is very real, it is just the response to it that isn’t.  Below, the official story of the arrest with just a bit of convenient editing:

Trivia – A 73 year old man was caught Monday trying to tag the word “Jew” on vehicles of the 16th district. The man and his wife, who are Jewish, have filed a handrail filed a complaint in July and August following antisemitic discovered in their building.