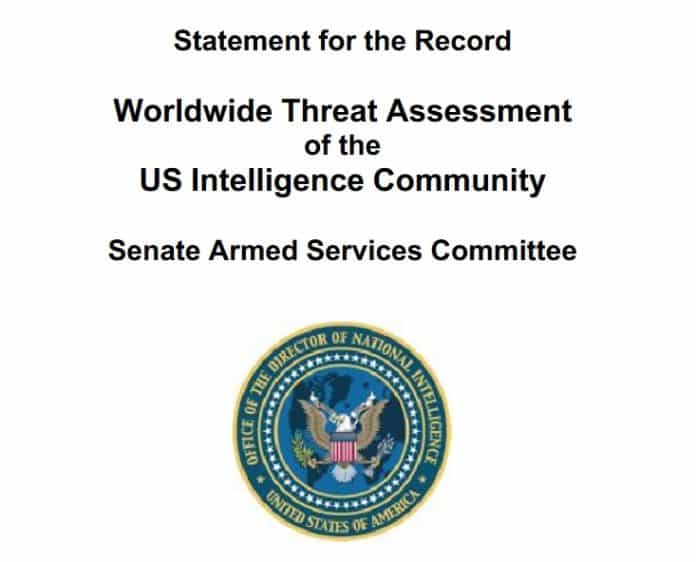 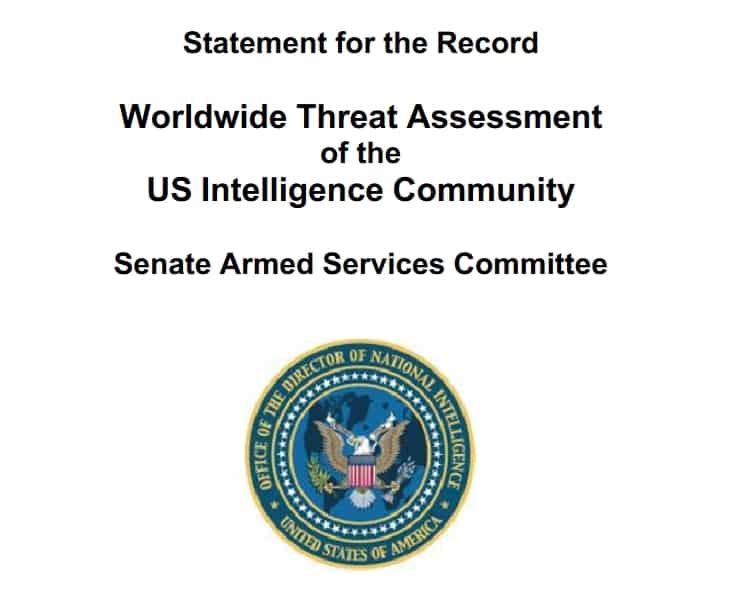 By Times of Israel

An annual report delivered recently to the US Senate by James Clapper, the director of National Intelligence, removed Iran and Hezbollah from its list of terrorism threats, after years in which they featured in similar reports.

The unclassified version of the Worldwide Threat Assessment of the US Intelligence Communities, dated February 26, 2015 (PDF), noted Iran’s efforts to combat Sunni extremists, including those of the ultra-radical Islamic State group, who were perceived to constitute the preeminent terrorist threat to American interests worldwide.

In describing Iran’s regional role, the report noted the Islamic Republic’s “intentions to dampen sectarianism, build responsive partners, and deescalate tensions with Saudi Arabia,” but cautioned that “Iranian leaders—particularly within the security services—are pursuing policies with negative secondary consequences for regional stability and potentially for Iran.

The United States and other Western nations, along with a coalition of regional allies, both Sunni and Shiite, has been launching attacks against Islamic State targets in Iraq and Syria in recent months. The Sunni group, also known by its acronyms IS, ISIS and ISIL, is an offshoot of al-Qaeda that has carved out a self-proclaimed caliphate across large swaths of Syria and Iraq, both of whose governments are allied with Iran’s.

The Shiite Lebanese group Hezbollah, which is funded and mentored by Tehran, has been fighting the Islamic State, independently of the American-led campaign, both in Syria and Iraq.

Meanwhile, the US has been engaged in marathon talks with Iran in an effort to reach an agreement on its nuclear program. Tehran, according to the National Intelligence threat assessment, has “overarching strategic goals of enhancing its security, prestige, and regional influence [that] have led it to pursue capabilities to meet its civilian goals and give it the ability to build missile-deliverable nuclear weapons, if it chooses to do so.”

The report said that it was unclear whether or not Iran would eventually decide to build nuclear weapons, but noted that should the Iranian government decide to pursue such a course, it would face no “insurmountable technical barriers to producing a nuclear weapon.” It lingered on Iran’s pursuit of intercontinental ballistic missile technology as a likely delivery system for a nuclear weapon, and delineated Iranian threats in the realms of counterintelligence and cyber warfare.

According to one Israeli think tank, the removal of Iran and its proxy Hezbollah from the list of terror threats, where they featured in previous years, was directly linked to the campaign against the Islamic State.

“We believe that this results from a combination of diplomatic interests (the United States’ talks with Iran about a nuclear deal) with the idea that Iran could assist in the battle against the Islamic State in Syria and Iraq and maybe even in the battle against jihadist terrorism in other countries,” the Meir Amit Intelligence and Terrorism Information Center said in an analysis of the report (Hebrew PDF). It also noted the Iran and Hezbollah were both listed as terrorism threats in the assessment of another American body, the Defense Intelligence Agency.

“Islamic Revolutionary Guard Corps-Qods Force (IRGC-QF) and Lebanese Hezbollah are instruments of Iran’s foreign policy and its ability to project power in Iraq, Syria, and beyond,” that assessment, also submitted to the Senate of February 26, said in its section on terrorism. “Hezbollah continues to support the Syrian regime, pro-regime militants and Iraqi Shia militants in Syria. Hezbollah trainers and advisors in Iraq assist Iranian and Iraqi Shia militias fighting Sunni extremists there. Select Iraqi Shia militant groups also warned of their willingness to fight US forces returning to Iraq.”

Israel, as well as Sunni allies of the US, has often warned that Iran, through Hezbollah and other proxies, has been sowing instability in the region. An escalating dispute between Jerusalem and Washington over the terms of an eventual agreement on Iran’s nuclear program has seen Israeli official rail against the relatively conciliatory tone adopted by US officials toward Iran, in light of the shared interest in combating the Islamic State.

In a polarizing speech before a joint session of Congress on March 3, Prime Minister Benjamin Netanyahu sought to persuade American lawmakers of the folly of signing an agreement with Iran, and, comparing its leaders to those of the Nazi regime of World War II, cautioned that it “poses a grave threat, not only to Israel, but also [to] the peace of the entire world.”

Iran has made bellicose statements toward Israel, threatening to destroy the Jewish state, often citing Israeli talk of attacking its nuclear facilities, which it maintains are for peaceful purposes.

Hezbollah, which is based to Israel’s north in Lebanon and the Syrian Golan Heights, has largely refrained from attacking Israeli targets since the bloody Second Lebanon War of 2006, although there have been skirmishes along the border.

In one recent confrontation, Israel struck first, purportedly destroying a Hezbollah unit near the front line of the Golan Heights. Among the seven dead on January 18 were an Iranian general, a top Hezbollah commander and the son of another former commander in chief. Some two weeks later, Hezbollah took revenge, killing two Israeli soldiers and wounding seven in a cross-border attack.