[ Editor’s note: In a way, these are VT’s glory days. In 20 years, we will look back upon this sliver of ‘time’ as the good old days, when we were young, feisty and jousted a good round against a series of fat-walleted and self-satisfied political opponents.

What greater manna could the cosmos provide? And in the vast ocean of the Internet, we found a luminescent starfish glowing in the abyss… New Eastern Outlook.

NEO’s Ulson Gunnar provides us with astute reflections about Russia, as he discusses Western attempts to revise and marginalize their history. This latest round of Western neoconservative attempts by robber barons to run down Mother Russia’s culture are foolish — she’s too deep and multi-faceted, with her feet in Europe and head in Asia. And, yes, during the 1940s, it was communist Soviet Union, and not the Russia we know 70 years later, but the people have a similar heritage of strength.

Human endurance is a unique and fickle thing. We endure disinformation and propaganda, sieges, pain, starvation, corporate-sponsored insecurity, and assaults on sensibility.

I remember when I was a teenager and read about the Siege of Leningrad in the Readers’ Digest, which was always conveniently shelved in my parents’ “library”. Amidst the pages filled with corny jokes and Norman Rockwell-ish sugary endings, I stumbled on a condensed article about the sufferings of Russians during WWII. I recall that I almost fainted from shock as I read the piece.

Leningrad (St. Petersburg) was besieged for twenty-eight months, resulting in the lives of around one million residents being lost.

During Operation Barbarossa by Army Group North, which was the Reichstag’s thrust to Moscow, Hitler decided to encircle Leningrad to starve it out, rather than using a direct attack, and sought to completely destroy the city and its population.

The Germans bombarded the city with air and artillery attacks, as they slowly starved the residents to death.

Said Astoria Hotel manager Anna Andreievna, “You don’t know what it was like. You just stepped over corpses in the street… Terrible things used to happen. Some people went insane with hunger. The practice of hiding the dead somewhere in the house and using their ration cards was very common indeed.

There were so many people dying all over the place, authorities couldn’t keep track of all the deaths.” So many people died that they had no coffins to bury them in. (Ref.: Eyewitness to History – Siege of Leningrad.)

Major Lozak, a staff officer in the Soviet Army, was quoted as saying,

“We never lost heart. The Battle of Moscow gave us complete confidence that it would be all right in the end.”

What the world is witnessing now is a repeat of a game of chicken from the 1930s. The Iron Curtain came down over two decades ago. But like a pesky fly, a street gang of Western oligarchs are teasing the Russian bear to see if it will try to swat it down, using provocations like these Russian bikers who have been banned from riding through Poland to commemorate when the Russian Army pushed the Wehrmacht back to Berlin.

It’s a cheap shot, and we should all be aware of what pre-war song the violins are playing. And, never let it be said that war isn’t a racket… Erica P. Wissinger and  Jim W. Dean ] 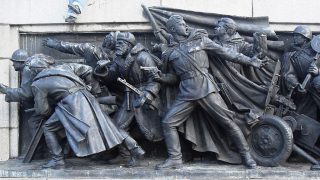 In efforts to demonize Russia, the history of the Western World is being distastefully rewritten. The monumental sacrifices of the Russian people during World War II are not only being marginalized, but flipped upon their heads.

Today, reading through the Western media, one will find a multitude of comparisons between Russia and Nazi Germany, with Russian President Vladimir Putin compared with Nazi dictator Adolf Hitler.

Beyond distasteful, this propaganda is dangerous to the point where it borders on exonerating the Nazis, even celebrating their acts of aggression and bolstering those monkeying their ideology today, particularly in Ukraine, Poland and other NATO-oriented Eastern European nations, where fascism has been resurrected to once again battle the Russian people.

The most recent example of this can be seen in an ABC News article “Polish Border Guards Refuse Entry for 10 Russian Bikers,” where Russian bikers planned to trace the route of Russian soldiers as they pushed back the Nazi tide in World War 2.

Their goal was to visit the grave sites of fallen Russian soldiers (which includes many Polish soldiers who fought alongside them) and honor the sacrifices of tens of millions who resisted and eventually ended fascism in Europe.

The ABC News article admits that Poland has been unable to explain precisely why the Russian bikers were barred from entering the country. No weapons were found and no danger was described. Instead, ABC claimed:

“This is not a normal bike club. They are tools in the hand of Vladimir Putin to make propaganda,” said Tomasz Czuwara, spokesman for the Open Dialog Foundation, a Polish group that supports Ukraine.

The German government has also expressed unease at the bikers and said they would not be welcome.

German Foreign Ministry spokesman Martin Schaefer said that Germany had decided to revoke the Schengen visas of a small number of people after the government concluded that “there are some people we believe to be in the leadership of the Night Wolves who we do not believe are pursuing a legitimate aim with their actions in Germany.”

Reminding the world of the dangers of fascism and extraterritorial military aggression is particularly inconvenient for the West, particularly NATO and especially the current political orders occupying power in Poland, Ukraine and even Germany.

Since the Russian bikers pose no real threat, it is clear that the decision to bar them from entering Poland, and possibly even barring them from entering Germany to honor fallen Russians in a war that Germany provoked and Polish collaborators helped facilitate, is purely politically motivated.

It is the West itself that often labels nations “dictatorships” and describes them as lacking “freedom” when activities are banned simply for political reasons, yet this is precisely what is being done now along the border of Poland.

“Free speech,” an alleged pillar of Western civilization ensures that even unpopular points of view and activism are protected. Honoring those who defeated the Nazis and fascism in Europe is hardly even “unpopular,” though it appears there are concerted efforts to change that.

Russia’s Thanks For Saving Europe

Before launching the invasion of Russia, Nazi Germany was the uncontested master of Western Europe. It had swept away Polish, French and British forces in a lighting-fast war before consolidating everything under a singular fascist supranational state.

The island nation of England was all that was left unconquered, and through a blockade and persistent air war, the Germans were confident they could break the British as well.

But in 1941, three massive German armies comprised of millions of soldiers moved east toward Russia. They aimed to seize Leningrad in the north, Moscow in the center, and the oil-rich southern regions in the Caucasus.

The ensuing battle soaked Russia with the blood of its people. Over 20 million Russians, soldiers and civilians, would perish in a battle that first confounded, then exhausted the Nazi military machine, before eventually overrunning them and pushing them back to Berlin itself.

It is commonly understood that if the millions of German soldiers committed to the failed conquest of Russia had been concentrated instead in the west, it is likely that Britain would have finally been conquered and the history of the Western World would have from then on been written by the Nazis.

But because of the monumental sacrifices of the Russian people, followed by sacrifices of Europeans and Americans, the Nazis were defeated.

In the wake of a conflict described as the most expansive military theater of all time, one would expect this sacrifice to lead toward generations of enduring vigilance against fascism. What must those with relatives who perished in this great conflict, in Russia and in both America and Western Europe, think when they see a Ukrainian regime come to power backed by ultra-violent fascist militias wearing the insignia of Adolf Hitler’s notorious Waffen SS divisions?

Hypocrisy and the Shape-Shifting Notion of Freedom

In America, biker clubs also often ride to commemorate the sacrifices of fallen comrades. There have even been events held in Vietnam, a nation the US invaded from almost literally the opposite side of the planet.

Yet the Vietnamese have allowed these events to move forward, a nation also described as “not free” by the West, yet apparently more willing to allow such events than the “free” West.

It is clear that the increasing animosity toward, and attempts to defile the sacrifices of millions of fallen Russian soldiers during World War 2 represents not only a temporary political row between the West and Russia, but a dangerous overwriting of history that attempts to obscure the crimes, atrocities and acts of aggression that led up to and lasted throughout the war. Obscuring the warnings taught by history invites history’s repeating itself.

It also represents an increasingly obvious hypocrisy pervading Western society, where the concept of “freedom” is used to label enemies as dictatorships, but is willfully trampled when politically convenient at home to an extent even “not free” nations refuse to entertain.

Barring the Russian bikers is just one of many attempts to disrupt this year’s Victory Day and reframe Russia as the very threat it helped defeat in World War 2. However, while Russian bikers seek to follow the trail of Russian soldiers as they pushed the Nazis back to Berlin, it is NATO that is following the ignoble steps of the Nazi army as it expanded eastward toward Russia.