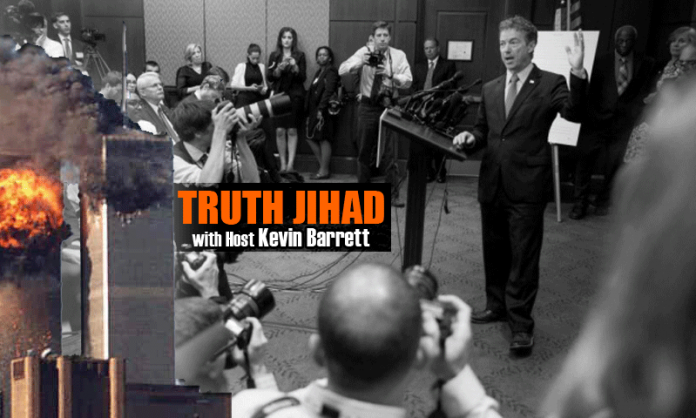 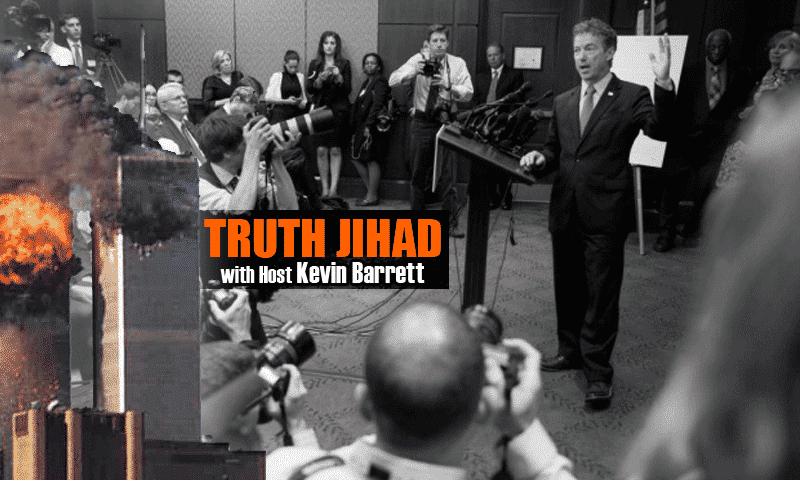 Barry argues that the push to declassify the redacted 28 pages of the Joint Congressional 9/11 Inquiry is not a “blame the Saudis” limited hang-out, but a pry-bar that could open the whole 9/11 can of worms – and expose the real perpetrators: the Bush crime family and the neocon-Likudniks. I made the same point during two recent Press TV interviews: 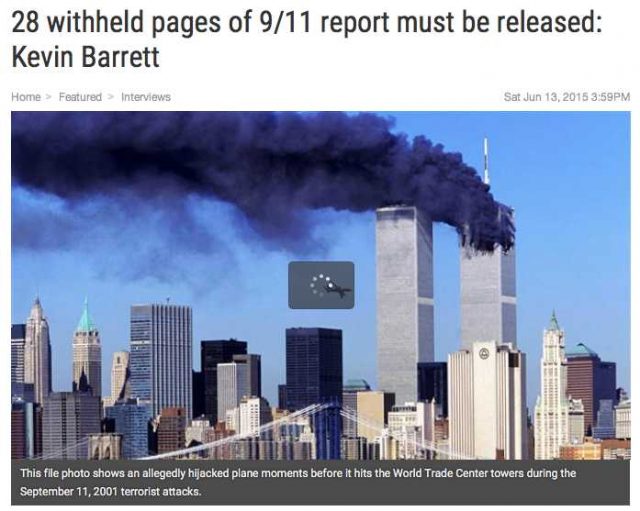 Press TV has interviewed Kevin Barrett, an author, researcher and political commentator based in Madison, to discuss a recently declassified 500-page CIA report on 9/11 with pages about Saudi Arabia’s involvement in the terrorist attacks left blank.

A rough transcription of the interview follows.

Press TV: A 500-page CIA report with 30 pages relating to Saudi Arabia blacked out. Why?

Barrett: Well, I think that if the American people actually see the information linking Saudi Arabia to the alleged 9/11 hijackers, all hell will break loose. We will learn that these alleged hijackers were being funded through the Saudi Embassy in Washington DC, [and] were getting their money from Bandar [bin Sultan], who is known here in the US as Bandar Bush – the Saudi prince who is an honorary member of the Bush family.

So this would not only implicate Saudi Arabia in arranging the patsies for the fake hijackings – there were actually no real hijackings on September 11 – but it would start a process of inquiry that might lead to solving the crime. This would shake up the power structure here in the United States completely because 9/11 was actually a very complex coup d’état. As a top-level CIA official told a friend of Robert Baer’s… he relates this at the end of his book See No Evil, which was published in 2002… top-ranking CIA official said that “When the dust finally clears, Americans will see that September 11 was a triumph for the intelligence community, not a failure.” What could that possibly mean? Well, it was a triumph in the sense that it was the most logistically complex false flag attack ever attempted and the Saudis who are very close with elements of the American deep state that pulled off September 11 along with the Israelis are going to be the first people blamed when these 28 pages are finally released, but they won’t be the last.

Press TV: Washington always demands transparency in any and all foreign policy issues and probes into sensitive matters. Now, isn’t it only logical that it hold itself to the same standard?

Barrett: Well, of course insistence on transparency coming from Washington is a complete joke. There is no more opaque bureaucracy (than) in Washington DC, and you can find that out just by reading these documents that were just released under the Freedom of Information Act. They are all available on the Internet. And they are utterly opaque bureaucratese CIA cover-your-whatever… it is not transparency by any means. And of course, Washington is actually less transparent than many countries… maybe even Saudi Arabia, which is an extreme example of a totally opaque dictatorship. In Washington DC, they deceive the world; they do several things at once; they work across purposes to each other. For instance, one element of the American power structure created and is still supporting ISIS, while another element pretends to fight ISIS. The same was true with Al Qaeda prior to 9/11. And in fact that is one of the interesting subtexts in some of these documents. They show that two different bureaucracies in the CIA were fighting each other prior to 9/11; the UBL Department, which was tasked with going after bin Laden, was fighting with another department whose name has been redacted.

I think the back story there is that the UBL Department, which was under-staffed with incompetent people who had no training for this, and were under-funded, were pretending to be trying to get bin Laden; but the deep state, which is funded by more than $1.5 trillion per year in drug money, which is then leveraged into even more money… that deep state element that has inter-penetrated with the CIA and other agencies which actually pulled off 9/11, was protecting bin Laden, manipulating and grooming him to be the patsy who would take the blame for the September 11th coup d’état. So yes, Washington D.C. is completely opaque. And when it calls for transparency in other countries, that is only so that it can see through their glass windows in order to target them.

Press TV: If the public, the American people and their respective Congressmen make a big enough fuss, who actually has the power at this point to declassify these redacted pages?

Barrett: Well, very interestingly, Senator Rand Paul just joined the movement to declassify the 28 pages. I was just speaking with Barry Kissin, who was at the hearing where Senator Rand Paul and other high-level officials were calling for this declassification.

I think if the American people demand that these 28 pages get released and get behind the few people with enough courage to lead the charge on this, including Senator Rand Paul, this could be the opening that could lead to the unraveling of the official story of 9/11. That will be a very painful thing for the United States but we need to go through that pain in order to heal. 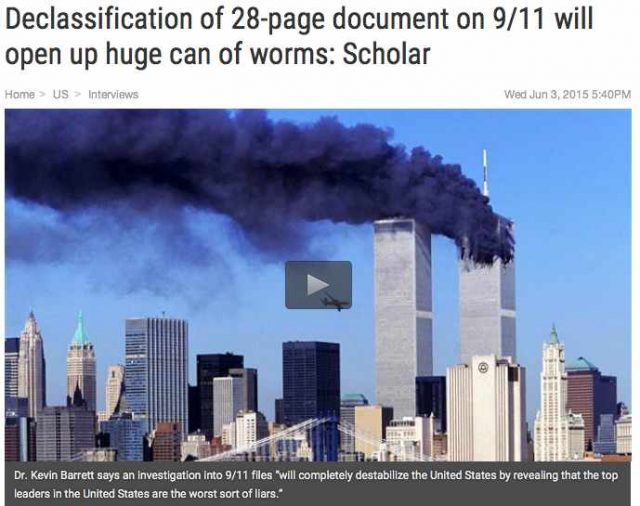 An American scholar in Wisconsin says a serious investigation into the background of fifteen alleged Saudi 9/11 hijackers, who were falsely blamed for “the 9/11 inside job”, would open up a huge can of worms.

“This missing document, these 28 pages, allegedly contain evidence of Saudi involvement in financing and backing the alleged 9/11 hijackers,” said Dr. Kevin Barrett, a founding member of the Scientific Panel for the Investigation of 9/11.

“And those who have seen these pages, including [former] Florida Senator Bob Graham and other people in the Congress have said that it completely transforms one’s viewpoint of 9/11,”  he told Press TV in a phone interview on Wednesday.

Dr. Barrett made the remarks a day after Republican Senator Rand Paul joined a group of bipartisan House lawmakers to force the disclosure of pages extracted from a 2002 Congressional inquiry into the September 11, 2001 attacks.

He said the reason that the classified pages are still hidden from the American people and the world is that an investigation into “the links revealed between the Saudi government and these patsies” will reveal that 19 hijackers were actually trained by the CIA in the United States.

The political commentator and activist said the document “utterly annihilates the official version and reveals that 9/11 was not an attack by a rogue group of terrorists, but it was actually a state-sponsored operation.”

“They were living with an FBI informant at times they were getting money from the Saudis. And they were also in the United States on CIA snitch visas. These are the visas that CIA issues to people who spy for it in Saudi Arabia. It’s part of the reward; you get paid if you’re Saudis and spy for CIA, and you get a free trip to America on a snitch visa,” Dr. Barrett revealed.

“So, the CIA brought the 15 Saudi hijackers to America — alleged hijackers I should say — on this these visas that prove that these fifteen Saudis were actually CIA agents. That’s just one of the facts that will emerge if there is a serious investigation of this,” he added.

“We will also learn that these alleged 19 hijackers [were] trained in secure US military facilities during the run-up to 9/11, including Pensacola Naval Air Station and others.”

Dr. Barrett offered the example that “Mohamed Atta, or the person who posed Mohamed Atta, who spoke fluent Hebrew by the way, was a regular at the officers club at the Florida military base.”

“So looking at the backgrounds of the patsies, who were falsely blamed for the 9/11 inside job, the coup d’état by Zionist neo-conservatives with the help of Israeli intelligence and treasonous elements  in the United States military and political system, will reveal this huge can of worms,” the American scholar underlined.

“It will be the scandal of the century; it will completely destabilize the United States, by revealing that the top leaders in the United States are the worst sort of liars and traitors,” he said.

“And frankly many people in positions of power here in the US, even those who are not at all complicit in the 9/11 coup d’état, don’t want to destabilize the country that much. And that’s why there’s been so much resistance to declassifying these critically important 28 pages,” Dr. Barrett concluded.

The September 11, 2001 attacks, also known as the 9/11 attacks, were a series of strikes in the US which killed nearly 3,000 people and caused about $10 billion worth of property and infrastructure damage.

US officials assert that the attacks were carried out by al-Qaeda terrorists but many experts have raised questions about the official account.