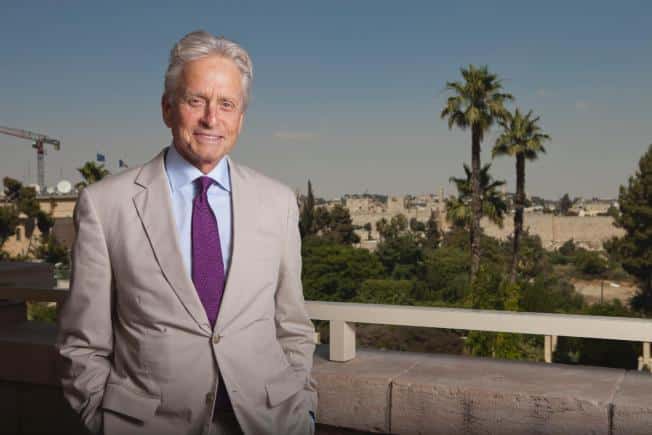 Some joker must have thought that Michael Douglas has already made a significant breakthrough in the twenty-first century.  He has been awarded the “Jewish Nobel Prize”[1] and has received two million dollars.[2] We are told that Douglas was awarded “for his efforts to promote Jewish culture.”[3]

But what does “Jewish culture” mean? Does that mean that Douglas has been promoting peace and harmony in the Israel/Palestine conflict? Has he traveled to Palestine like Rachel Corrie did and seen the pain and suffering that the Israeli regime has imposed on the innocent and the helpless? Or could it be that he has been awarded for advancing evil things in Hollywood?

The media wants us to believe that Douglas is a “peace activist.” The questions again are pretty simple. What has Douglas said about Israel’s massive killings of the Palestinians? What has he said about peaceful resolutions in the Middle East? Has he delivered any lecture about living in peace in the Middle East? Perhaps he should pay some attention to Palestinian filmmaker and artist Amer Shomali, who now lives in Ramallah. Shomali said:

“Israeli officials barred me from going to my film’s premiere for ‘security’ reasons. This is life under occupation… In the West Bank and Gaza, the Israeli state controls Palestinians’ border crossings, internal movement within the West Bank, airspace, tax system and population registry. Israeli officials decide where and when Palestinians are allowed to travel. Israeli state authorities even shape our diets by determining what imported foods we are allowed to eat and drink…

“I am not alone. My story is similar to those of tens of thousands of other Palestinians living under the Israeli matrix of control in the occupied territories. Introduced in various forms over the last 48 years, initial restrictions have spawned an elaborate system that dictates who can travel where.

“In the West Bank, a network of walls, other barriers, and military checkpoints slices the land into an archipelago of separate enclaves. The most extreme case is the Gaza Strip, where 1.8 million people are imprisoned in an enclave roughly twice the size of the District of Columbia.

“Israel’s instrumental use of the word ‘security’ is both elastic and arbitrary. In practice, it is used to limit the freedom of movement of Palestinians who have no recourse.”[4]

Will Douglas help Shomali in the fight? Will he promote his work in Hollywood? If not, how can Douglas want us to take him seriously when he starts talking about “anti-Semitism”? Will he entertain the thought that there is such a thing called anti-Gazans?

As I write, Paul Miller, executive director of the Salomon Center for American Jewish Thought, has lambasted University of Missouri biology professor George Smith for saying that, among other things, the average Palestinian has “go through a checkpoint every time he has to take a shit.”[5] Smith also said that the creation of Israel in 1948 resulted in the “Palestinian Holocaust.”

Miller, of course, did not like Smith’s approach here. Miller was quickly transformed into a fire-breathing dragon and declared that the “U.S. higher education goes down the rabbit hole.”[6]

Once again, has Miller heard of Israeli historians like Benny Morris and Illan Pappe? Is Miller familiar with academic Andrew Pessin, who said that Palestinians are “rabid pit bulls”?

Going back to our previous point. We can easily see that “promoting Jewish culture” is pregnant with meaning. Douglas works in Hollywood, and some of his brethren like Eli Roth brag that their work will “fu$k up an entire generation.”[7]

So, “promoting Jewish culture” inevitably or indirectly leads to the view that unless the Goyim are screwed up morally and spiritually, then people like Roth will live a miserable life. How else would they continue to produce pornography in the name of “freedom”? How else would they continue to use some Goyim and then degrade them?[8] Isn’t Roth known for inventing things such as “torture-porn”?[9] Roth said:

“We’re all just trying to bring back really bloody, violent, disgusting, sick horror movies… When I go see an R-rated horror movie, I want lots of violence. I want nudity. I want sex and violence mixed together. We’re in a really violent wave and I hope it never ends. Hopefully we’ll get to a point where there are absolutely no restrictions on any kind of violence in movies. I’d love to see us get to a point where you can go to theaters and see movies unrated and that people know it’s not real violence.”

Movies unrated? What in the world is this man talking about here?

Roth here is indirectly saying that you should take your five-year old child to go see his new movie, Knock, Knock, featuring Keanu Reeves. Here is the trailer:

Whether he likes it or not, Roth is proposing a Talmudic worldview, and that is how he approaches movies. That is almost certainly the view that Douglas has been advancing in many of his movies.

The interesting thing is that Douglas has not only corrupted himself but has projected his own lifestyle onto the culture and much of the world through his work. Keep in mind that it was the same Douglas who played in subversive movies such as Basic Instinct, Fatal Attraction, etc.  Douglas himself said, “I hide behind my work a lot.”[12]

Douglas seems to be telling the truth in reverse here. Put simply, Douglas can be understood through much of his work. Basic Instinct, which biographer Marc Eliot called a “masturbatory screenplay,” was offered to people like Peter Weller, Sylvester Stallone, Wesley Snipes, Denzel Washington, Kurt Russell, Mickey Rourke, Alec Baldwin, Don Johnson, Tom Cruise, and Patrick Swayze.[13] None of those guys had the guts to digest, well, the “masturbatory screenplay.” “Only Michael,” writes Eliot,

“whose instincts were impeccable, would see Basic Instinct as not just a big picture, but a phenomenon, one that would polish his slightly tarnished leading man image by allowing him to play a slightly tarnished rogue cop…[Producer Mario] Kassar eventually agreed to Michael, not necessarily for his acting abilities but because no other big name would do it.”[14]

Kassar paid “$15 million to Michael Douglas for him to star in Basic Instinct.”

As it turns out, Michael Douglas, like Arnon Milchan,[15] was and is still working for the Israeli regime. It took him years to identify himself as a “reform Jew.”[16]

“a commitment to Jewish values, the Jewish community and the state of Israel…Genesis chairman Stan Polovets said in a statement issued Wednesday that Douglas was being honored ‘both for his professional achievements and for his passion for his Jewish heritage and the Jewish state.’”[19]

Douglas’s double standard becomes quite apparent when it was reported that he is presumably an advocate of nuclear disarmament. As we have argued over the past two years, Douglas must know that Israel has hundreds upon hundreds of nuclear warheads.[20] In fact, Israel does not even allow international inspections.

Douglas must also know that Israel has used covert operations to wipe out perceived enemies.[21] Douglas should know that the Mossad worked with former Nazis such as Otto Skorzeny.[22] Douglas is an intelligent man and is almost certainly aware that Israel was involved in the bombing of the King David Hotel.

“We possess several hundred atomic warheads and rockets and can launch them at targets in all directions, perhaps even at Rome. Most European capitals are targets for our air force…. We have the capability to take the world down with us. And I can assure you that that will happen before Israel goes under.”[23]

It is also reported that Douglas is an advocate of gun control. But how did this man end up making millions upon millions of dollars in Hollywood promoting the opposite ideology? How would the Dreadful Few in Hollywood continue to pervert and subvert and invert the Goyim without guns and violence and drugs? Hasn’t Douglas read Michael Medved’s Hollywood vs. America?[24]

Hasn’t Douglas seen David Cronenberg’s A History of Violence and Eastern Promises? More precisely, has Douglas seen Douglas’ Basic Instinct and Fatal Attraction? Why is it that the Dreadful Few have promoted violence, drugs, degeneracy, race riots, and even pornography in Hollywood?

In short, Douglas is an Israeli double agent whose goal is to force Talmudic mores on the American culture.

[4] Amer Shomali, “We are imprisoned by Israel: A filmmaker not allowed to attend his U.S. premiere on the nightmare of life in the West Bank,” Salon, June 24, 2015.