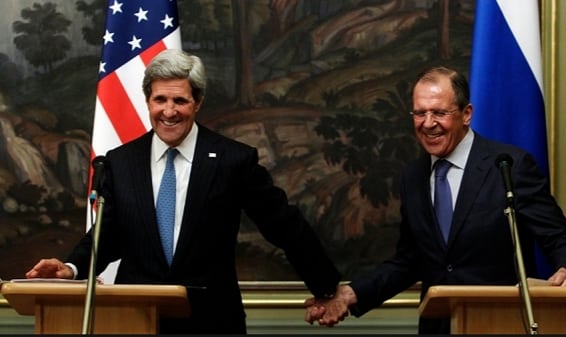 Lavrov said he had raised this issue at a meeting with U.S. Secretary of State John Kerry in Doha following US President Barack Obama’s sanctioning US’ possible bombardment of the Syrian government troops.

“This issue was raised. I raised this issue before John Kerry. When a year ago the United States announced its plans to establish a coalition to fight against Islamic State in Iraq and Syria, Washington back then enrolled consent of the Iraqi government but opted not to ask consent from Damascus,” Lavrov said. “Already then, we pointed to the illegitimacy and counter-productivity of such an approach as violating international laws in principle. And as for practical aspects, all this hampers the formation of a consolidated front to fight against Islamic State, Jabhat al-Nusra and their affiliated terrorist groups.”

“All recognize that air strikes only are not enough, it is necessary to consolidates the like-minded, including those who repulse the terrorist threat with weapons in their hands on the ground,” the Russian minister said. “As for the latest developments [concerning the actions of the US-led coalition against the terrorist group Islamic State], we posed a question to [US Secretary of State John] Kerry,” he said. “We think it counterproductive to announce publicly that aviation will deliver air strikes to protect groups of the so-called moderate opposition. Such plans give birth to many questions. It will hamper anti-terrorist efforts.”

“Sometimes, it is difficult to see who is fighting against whom and who is hampering whom,” he added. “I do not think that I succeeded in shaking the US stance. Apparently, we are too wide apart on this issue,” Lavrov said.

The Russian top diplomat also said his meeting with former president of the National Coalition for Syrian Revolutionary and Opposition Forces Ahmad Mouaz al-Khatib indicates no changes in Russia’s approaches to the Syrian crisis.

“The meeting with Mouaz al-Khatib does not mean any changes in Russia’s approaches to the situation in Syria,” Lavrov said. “It reflects our principles position to work with all representatives of the Syrian people, giving no preferences to either of them.”

Russia stands for immediate cessation of any outside interference into the Syrian crisis and calls on all the parties to the conflict to sit down at the negotiating table.

“We are seriously concerned about the ongoing crisis in Syria and the humanitarian catastrophe in that country,” he said. “We demand that in line with the Geneva communiques any outside interference into the Syrian crisis be stopped and urge the Syrian parties to sit down at the negotiating table to reach agreements by exclusively peaceful, political means on the basis of mutual consent.”

“All problems are to be solved on the basis of general consent,” Lavrov noted. “Many countries are taking efforts to promote the establishment of a broad dialogue involving the Syrian government and the entire spectrum of opposition forces.”

In such conditions however, he said, it was becoming apparent that the position upheld at the time of the Geneva conference in 2013 was wrong, since only once opposition group, namely the National Coalition, had been invited to the conference.

“It became obvious very soon that the spectrum of opposition forces is much wider,” Lavrov said. “And in order to resume the political process the opposition must consolidate its efforts towards a constructive dialogue with the regime, just what is written in the Geneva communique.”

The Russian foreign minister reminded that Moscow had hosted two meetings, where “the Russian side invited all opposition groups, both domestic and those active abroad.”

“The meetings yielded the Moscow platform that lays down the principles reflecting the Geneva’s communique’s goals of preserving Syria as a territorially integral state and securing Syria’s sovereignty, so that Syria is a secular state where the rights of all ethnic and religious minorities are protected by the law,” Lavrov said. “Efforts towards this goal must be continued.” Besides, Lavrov on Monday held a meeting with his counterpart from Saudi Arabia, Adil Al-Jubayr.

“At this meeting, we discussed ways to support efforts of the UN special envoy for Syria Staffan de Mistura geared to form conditions for practical implementations of agreements commuted to paper in the Geneva communique of June 30, 2012,” he said. “We proceed from the fact that it would be a contribution to de Mistura’s efforts and that in the long run we will be able to reach progress in the Syrian settlement, concurrently promoting the political process that would be acceptable for all Syrian parties and forming a strong front to address the terrorist threat in the Middle East.”