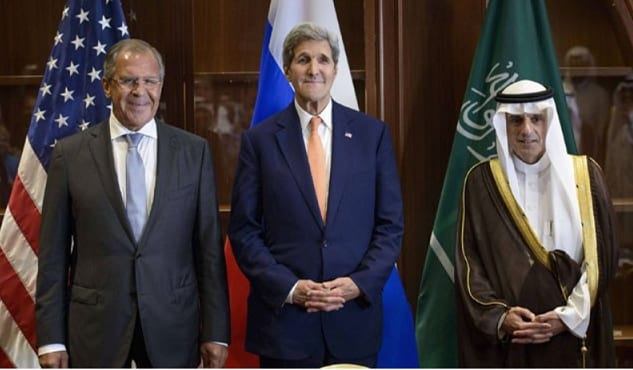 The two ministers last met in Qatar on August 3 when Lavrov, Jubeir and US Secretary of State John Kerry held a three-way meeting, with the situation in Syria topping the agenda.
Saudi Foreign Minister Adel al-Jubeir will visit Moscow on Tuesday to discuss Syria conflict and the ISIS group with his Russian counterpart Sergei Lavrov, the Russian foreign ministry said Saturday.

The two ministers last met in Qatar on August 3 when Lavrov, Jubeir and US Secretary of State John Kerry held a three-way meeting, with the situation in Syria topping the agenda.

The ministers will continue “a discussion on ways to resolve the crisis in Syria,” the Russian foreign ministry said.

Moscow said topics would include the “sharp growth in strength of various extremist groups, primarily the so-called Islamic State”.

“The ministers will discuss the possibility of Russia-Saudi cooperation in fighting terrorism, which is in the interests of both countries,” the ministry said.

It said they would discuss Russia’s proposal to create a “broad international coalition to fight the ISIS gunmen inside Syria.”

Moscow said the ministers would also pay “great attention” to the conflict in Yemen where a military coalition led by Saudi Arabia attacking Yemeni people and discuss strategies for a “speedy resolution”.