Home Life NEO – Hollande Shot Himself in the Foot by Canceling the Mistral... 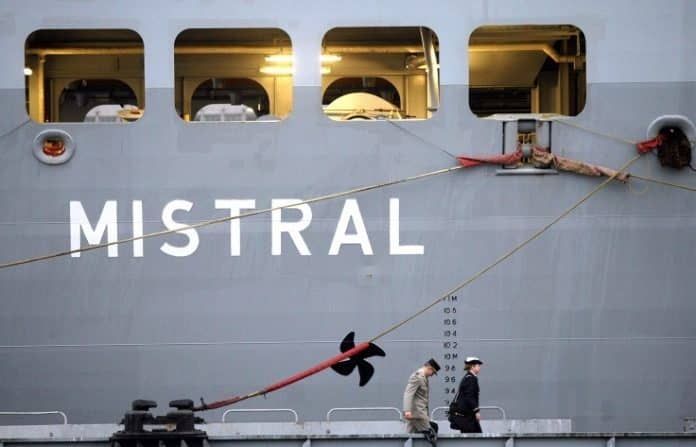 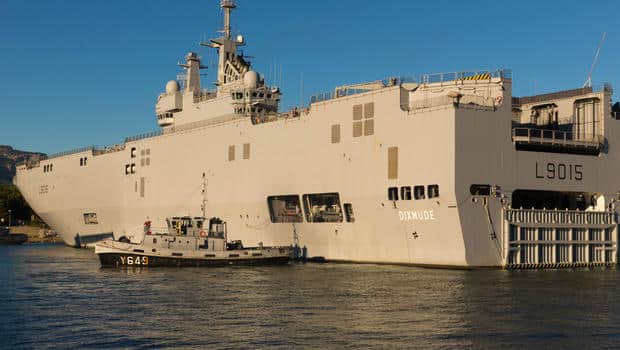 [ Editor’s note:  I had always wondered what strings were being pulled on Hollande to ride the Mistral Affair over the cliff. It certainly had nothing in it for France, but quite the contrary. And if NATO was putting the squeeze on, then it was NATO’s place to pick up the cancellation tab.

So it had to be something else. Blackmail is always at the top of the list. God only knows these big political figures have more than a few sordid things in their Intel files that not too many get to see. But Hollande’s opposition is going after him like banshees on this.

France has done well in arms sales to the Gulf. But those folks are running out of places to park the stuff, much less have competent people that can fight the stuff that aren’t mercenaries. Its pending fighter bid with India is facing stiff competition from Russia with the Asian Pivot having India reorient itself long term on where they will buy their major weapons. After the treatment the Russians got, India has to be nuts to contract with France.

Cross your fingers that the formal investigations into killing the Mistral deal really exposes what happened. If Hollande was being blackmailed, that will be hidden behind a national security veil, but that can make someone angry enough to leak the truth.

The Russian shipyard contractors getting the new Mistral business are the winners, as the new boats might be serviceable in both the Arctic and Pacific. And if the Indians go Russian on their 5th generation fighter, that will be a big boost to those production lines when Eurasia needs all the defensive power it can muster.

And it must be the dependable kind, including access to an integrated supply chain, so if a shooting war started with warehouses and production lines destroyed, you are not left hung out to dry. These concerns give military brass heartburn. Helping a NATO country keeps its production lines tuned up and running is beyond stupid… Jim W. Dean ]

The events surrounding the contract between France and Russia on the construction of two Mistral ships for more than a year have been the focus of different countries.

Particular interest to this deal was paid by Washington, where policymakers were convinced that their “training leash” will not allow the sitting authorities in the Élysée Palace to follow the path of the self-determined Charles de Gaulle.

Even more attention to this deal was paid by the states that have already made their first steps toward the development of economic and military cooperation with Paris, or are considering such options. Those were the states of the Arab world, Africa and Asia.

After all, the credibility of a business partner plays a pivotal role in any trade deal, and when this partner is deprived of its own opinion, while being fully dependent on its masters overseas, it provides little assurance.

So after a somewhat prolonged attempt “save face” by Hollande, and after the personal intervention of Russia’s President Vladimir Putin, Élysée Palace was compelled to announce a decision to cancel the contract on the construction and delivery of two Mistral-class helicopter carriers.

There are reports that, after eight months of negotiations under the personal supervision of the Russian Deputy Prime Minister Dmitry Rogozin and the French French Secretary General for National Defence Louis Gautier, the sides reached an agreement that all funds that had been allocated by Russia must be returned.

The contract between the French DCNS and the Russian Rosoboronexport included a total worth of 1.12 billion euros signed back in 2011. According to this contract, the first vessel named Vladivostok was to be handed over to Russia in November 2014.

But at the very last moment Paris authorities, while keeping an keen eye on the White House, suspended the transfer of the helicopter carrier, stating that this decision was dictated by “the situation in Ukraine.” The second helicopter carrier Sevastopol, though finished, didn’t change hands as planned either.

As a result, Paris was forced to transfer 1.16 billion euros to Russia, out of which 785 millions had previously been paid by Russia, while the rest should cover Moscow’s expenses, including the training of 400 Russian crewmen, the construction of infrastructure in Vladivostok (where the first Mistral was to be stationed), and the building of four helicopters for the ship.

However, one should not forget that there’s even more financial losses that the Fifth Republic has to suffer, since the maintenance of Mistral ships costs the company-manufacturer DCNS up to two million euros per month. The company management fears that they won’t get paid for all these losses, hence the contract will become a heavy burden for the employees of this manufacturer.

The future of these vessels remains unclear, since the French navy has already bought three ships of this type and is unlikely to seek procurement of new vessels. The only logical decision is to sell them at a bargain price, but there’s no buyers. Canada has already stated that it may be considering such an option, but it is hardly an easy client to deal with. India and a number of other countries are also considering their options, but are unlikely to make any deal soon.

An equally important question is who will pay for the translation of virtually every single inscription on these vessels? After all, using Russian ones wouldn’t be convenient for any other owner. In addition, Moscow ordered helicopter carriers equipped with heating systems. Those are perfect for plying the waters in the Baltic Sea, but can hardly be of any use in the Indian Ocean.

French taxpayers will be the ones to pay a hefty price for Hollande’s silent obedience to Washington, but will they take it lightly or will they flood the streets – time can only tell.

But it’s hard to overestimate yet another factor –  losses suffered to one’s reputation, starting with France itself, who can hardly be considered a sound political and business partner anymore, and ending with French companies, namely DCNS / STX, which are now going to have a hard time doing business abroad. Even if some production of these companies will be delivered to other countries, the fate of its maintenance will depend on the political decisions of the White House.

The decision on the Mistral contract has already been labeled a catastrophe for France by numerous Western politicians. In particular, that exact word was used by a deputy of the French National Assembly, Thierry Mariani, who said that this cancellation of the deal shows that there’s no independence left in Paris.

According to Mariani, France will suffer tremendous financial losses, but the government is silent about it, since it doesn’t dare to  tell  taxpayers the exact sum they will pay for this political and diplomatic disaster.

French businessmen can now forget the long-term commercial contracts on the supply of their products abroad, and it’s not just military contracts such as the shipment of some Rafale jets to India, but even the most basic equipment for the production of cheese. It’s no wonder that against this background, the risk ratios on French share markets have skyrocketed over 100%.

And what about Washington? Has it granted a worthy prize to its obedient servant? Seems like it’s not the case. There has been no mention about compensation for the financial losses. One can only recall the events of 2013, when President Hollande decided to demonstrate his loyalty to the White House by committing an unprecedented violation of international law, when he forced the jet of the Bolivian President Evo Morales to land in Austria.

Then, to become even a more “trusted person” in Washington, the sitting French President started a campaign of disinformation about the use of chemical weapons by Damascus.

At that time, François Hollande was daydreaming about French jets bombing Syria to the stone age, pilots were on high alert but then Washington did not even care enough to promptly inform its servant about the change of plans, putting France in a very embarrassing position. This time around the situation is no different.