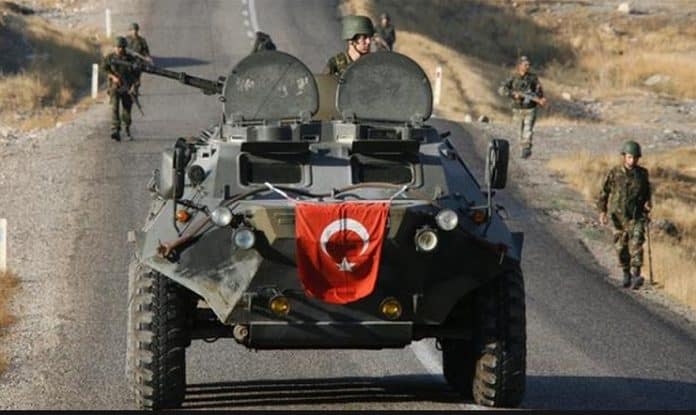 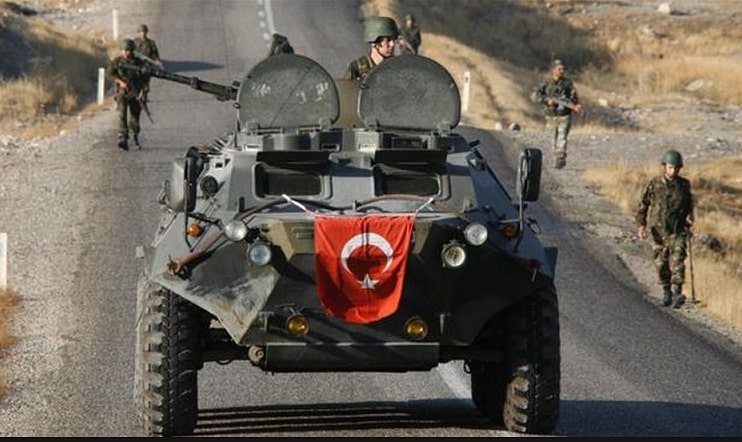 Turkey and the United States have jointly decided to move into Syria, daring Russia to respond.  The US and Turkey have dropped all references to protecting refugees, always a very hard to sell fantasy based on Turkey’s long history of persecuting minorities.

State Department spokesman, Mark Toner, yesterday started laying out the rules for the “buffer zone” the US and Turkey have decided they are carving out for Turkey.  It is claimed that this “zone” will be occupied by the Free Syrian Army and can only be used by forces sworn to overthrow the legal government in Damascus.

There is a problem with this.  There are no units of the Free Syrian Army in the North of Syria.  In February 2015, that force disbanded with its leadership fleeing to Turkey.  The Free Syrian Army, since 2014, has been reorganized by the Turkish intelligence forces as an organization answerable to Erdogan and the Saudi, Qatari trainers assisted by American contractors. The majority of those initially involved with the FSA have accepted amnesty from the Damascus government or have joined al Nusra or ISIS forces.

Any forces sent by the United States and Turkey into Syria can only be there for one purpose, assisting ISIS in overwhelming the Damascus government that has taken on new vigor in its fight against terrorist forces.

It is believed that this new aggressive move is one of desperation based on improved relations between Russia and Saudi Arabia and recent inroads in the chilly relationship between Saudi Arabia and Iran. Saudi Arabia, it is said, has given up its material support for ISIS in Iraq and Syria, leaving that organization to fend for itself, aided only by Israel, Turkey and the United States.

Let’s be honest here.  This is Syrian territory and the Syrian military has every right to bomb terrorists there and to operate freely there.  Any attempt by the United States and Turkey to restrict the operations of the Syrian military inside their own country on behalf of what everyone knows are terror organizations that have been looting Syria on behalf of Erdogan and his wealthy friends, not just oil and antiquities, they actually trucked out an entire automobile assembly plant and dozens of other factories, all into Turkey.

In discussions with Syria’s Minister of Justice last week, Najm Hamad al-Ahmad, we were told a working group is being established to cite Turkish involvement in war crimes inside Syria including human trafficking and piracy.  There are reliable reports that from Syrian Christians kidnapped over the past 4 years by ISIS terrorists that Syrian citizens are not being protected as refugees inside Syria by Non-Governmental Organizations but rather being held in concentration camps where those who fail to convert and join ISIS fighters are being executed, all with full complicity of Turkish military and intelligence units.

The refugee issue, supposedly an important one to the West with recent stories of how Syrian refugees are making a home in Jordan making the news, needs to be discussed.

Reports out of Turkey have been consistent on one thing, Non-Governmental Organizations supposedly working with refugees are providing logistical support for both ISIS and al Nusra. Truck convoys from NGO’s have brought Sarin gas into Syria, confirmed by sources inside Turkey along with the Syrian Ministry of Defense, and transported precursor chemicals for Turkish Army run bomb factories inside what can now be openly spoken of as Turkish Occupied Syria.

All the while, the CIA run Syrian Observatory on Human Rights provides cover by blaming Damascus for Turkish atrocities.

As Turkey hosts both Al Nusra and ISIS, provides both logistic support and safe haven, free and open transit as well and now air support as well with attacks on US backed YPG fighters along with PKK, some of the most successful forces opposing ISIS in this critical war, failing to cite Turkey as a combatant is more than remiss.

With a flurry of unconfirmed stories out of Moscow last week of a confrontation between President Putin and the Turkish ambassador, reportedly citing Putin’s anger at overt Turkish military moves against Syria, there can be little doubt that the West has decided that Syria, rather than Ukraine, is where they wish to confront Russia.

Non-Governmental Organizations, once overseen by the United Nations, some under Special Consultative Relationship, have now become the bane of the Middle East. Some, perhaps most are CIA and Mossad fronts. All are seemingly tasked with saving refugees, “cataloging antiquities” or selecting valuable Syria or Iraqi assets such as machine tools, CNC and robotics needed for Turkey’s burgeoning “sweat shop” industrial empire.

Where Syria plans legal challenges, demanding international criminal prosecution against these organizations is in their “refugee work.” Some refugees “flee” on their own, filling camps in Jordan and Lebanon or adding to the already overflowing population of cities like Damascus. Many go to Turkey, all are screened, investigated, often blocked for weeks or months. Some, however, are trucked into Syria with no trouble at all.

These are ISIS captives, taken to camps inside Turkey, picked up by NGO’s working with ISIS, transporting weapons in and taking out human captives as “refugees,” in reality human trafficking for the brothels of Britain and Germany.

Scenes reported are reminiscent of Schindler’s List, the 1993 Spielberg film depicting treatment of the Jews by Nazi, Germany.

No one disputes these hideous acts though the Kurdish government in Erbil says little, too little when its people are slaughtered by the Turks.

The US has assumed that, with continual moves against Donbas, they can brutalize Russia’s ally, Syria without repercussions. This is what is really behind the US move.

Gordon Duff is a Marine combat veteran of the Vietnam War that has worked on veterans and POW issues for decades and consulted with governments challenged by security issues. He’s a senior editor and chairman of the board of VT, especially for the online magazine “New Eastern Outlook”.