Less than two weeks before the 14th anniversary of 9/11, General Petraeus announced that the US should forge an alliance with al-Qaeda to fight ISIS.

A US alliance with al-Qaeda?

Better idea: Let’s forge an alliance with al-Qaeda to fight the neoconservatives – the folks who actually pulled off the murderous 9/11 deception.

But seriously, folks, Gen. Petraeus must be really, REALLY scared of ISIS if he thinks the only way to beat them is to make friends with al-Qaeda.

Maybe we should bring Bin Laden back from his alleged watery grave and have him magically cause ISIS’s buildings to explode into powder through the path of most resistance at free-fall acceleration?

Wait a minute…ISIS doesn’t have any tall buildings.

On the other hand, an explosive controlled demolition of their tents, conducted by a dead guy hooked up to an underwater dialysis machine with seaweed dripping from his beard, would scare the hell out of them.

Bottom line: ISIS is so evil we will hook up with anyone, ANYONE, to fight them. Anyone except Russia, that is.

For details, check out my latest two Press TV interviews. 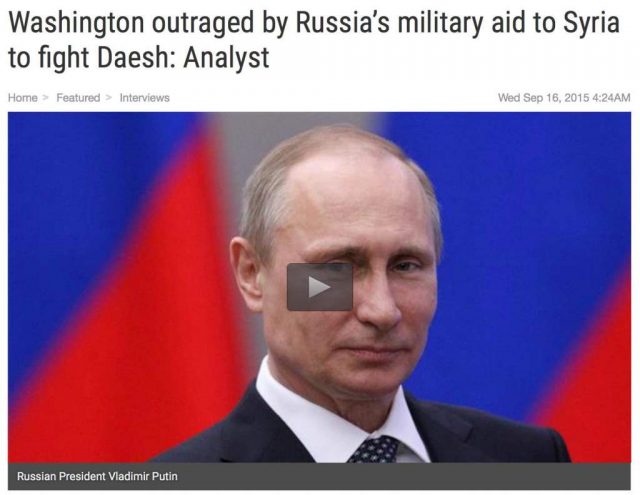 Press TV has interviewed Kevin Barrett, an author and Middle East expert, in Madison, and political commentator Jihad Mouracadeh in Beirut to discuss a dispute between Russia and the US over fighting Daesh (ISIL) terrorists in Syria.

Barrett says that there is “great outrage” in Washington over Russia’s military backing of the Syrian government in their fight against Daesh, just as they were angry at Iran and Hezbollah for their support for Damascus.

He says that the Russians are “clearly” helping Syrian President Bashar al-Assad and seeking to stabilize the situation in the war-torn country by sending a strong message to the West, which has “destabilized Syria in attempt to overthrow its government.”

“The Russians have said enough is enough! You have utterly annihilated Iraq (and Libya)… the buck stops here, you are not going to do the same to Syria,” he maintains.

The US is behind the ongoing conflict in Syria and former director of the Central Intelligence Agency (CIA) General David Petraeus’ call on the US to cooperate with al- Qaeda is enough proof, the analyst argues.

He says the Daesh terrorist group is becoming a “Frankenstein’s monster.”

“[The] US and its allies created the ISIL and the ISIL is a tool of destabilization that may have already served its purpose to the point that they are ready to try and clean it back up,” he adds.

The White House uses Daesh to “ruin” countries which do not serve Israeli interests like Syria, he says.

Mouracadeh, for his part, says that Russia is building a military base in Syria. He claims that Moscow is not in Syria to fight Daesh, but to consolidate its own position because the Assad government “is not able to hold it anymore.”

He says it is “a little bit too late” for Russia to join the ongoing air strikes against the terrorist group, and even now Moscow must first coordinate with NATO and the US to carry out such operations. 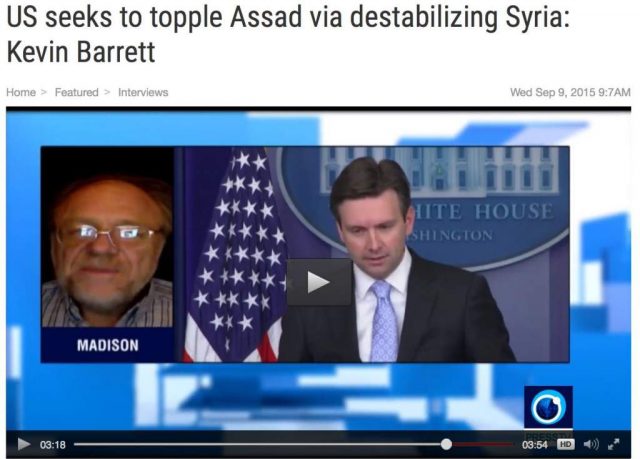 Following is a rough transcription.

Press TV: It seems that the US is accusing Russia of a military buildup in Syria, especially in Latakia and near the capital Damascus. Moscow, of course, denies that but the question is why is Washington so afraid of a military buildup given that Syria is itself a victim of ISIL and is fighting it?

Barrett: That is right. It is a very paradoxical situation. We have the American side claiming that the so-called war on terror has moved into a new phase and the new enemy is ISIL. And that is what is being used to propagandize the American people against Islam, to propagandize the American people for more military spending and we are hearing the Republican presidential candidates trying to one-up each other in exaggerating the threat to civilization and humanity coming from the ISIL.

And yet at the same time, the US government is basically supporting ISIL and basically created it to destabilize Syria in an attempt to overthrow the government of President Assad. So it really doesn’t make a lot of sense. And every time somebody actually tries to fight against ISIL, whether it would be Hezbollah, or the government of Syria or now Russia, it seems that the Americans are not happy. So they have a lot of explaining to do to the American voters.

On the one hand, they are telling us that we must fight ISIL – and then when Syria, Hezbollah or Russia actually tries to help out fighting ISIL or it appears that it is what is happening, they complain about it. So somebody really needs to ask some hard questions from the people in Washington.

Press TV: The US along with its regional Arab allies and Turkey is funding and training terrorists whom it calls moderate rebels which are actually the opposition in Syria. They claim to be trained to fight ISIL or Daesh but they can also be used to topple the Syrian government and they can also turn out to be terrorists like what happened with al-Qaeda. However, when it comes to Russia, and its sending in any kind of support to the government against the terrorists, the West becomes very concerned about it.

Barrett: That is right and now we are hearing about a rehabilitation of al-Qaeda. We are hearing American policy makers suggesting that it is time to help the al-Nusra Front which is now fighting with ISIL, but of course, that is an al-Qaeda group. We are told here in America that it was al-Qaeda that attacked the world trade center and murdered 3,000 Americans on September 11, 2001. Of course, that is not true, but that is the propaganda line we get in the mainstream media.

What we are really seeing is a destabilization program. We have seen this over and over in history when the United States empire, which is not run on behalf of the people of the United States, feels that it needs to overthrow a foreign government that isn’t obsequious enough in its relations with Washington, they destabilize the country. They are a lot of means of doing that; trashing the country’s economy, stirring up trouble with labor unions, doing false-flag terror attacks… now there are a million ways to destabilize a country and Syria has gotten that same treatment that has been mitted out to some countries in the past and it has gotten them even worse.